The New Zealand dollar is almost unchanged on Tuesday. In the North American session, NZD/USD is trading at 0.6984, down 0.04% on the day.

The New Zealand dollar is taking a breather after close to a week of volatility. The currency plunged 2.65% last week and fell below the symbolic 70-level for the first time since April. The US dollar soared after last week’s FOMC meeting, as policymakers brought up the timeline for interest rate hikes, signalling that there could be two rate hikes in 2023.

Fed Chair Powell can state with confidence that he hasn’t veered from his dovish stance. After the FOMC meeting, Powell urged the markets to take the new timeline with a grain of salt, but his message fell on deaf ears, as the dollar soared and equities sank.

In prepared remarks which Powell will read to Congress later in the day, the Fed Chair reiterates that inflation is transitory. Some investors might be scratching their head hearing this, given that US inflation has hit a 13-year high. Still, there’s no point arguing with the market, and dovish comments from Fed member John Williams have only reinforced the market’s perception of the Fed remaining dovish.

In New Zealand, the RBNZ quietly is continuing to scale back its weekly QE purchases. The central bank had been paying NZ 350 million dollars but has trimmed this to NZD220 million and this is expected to fall to NZD200 million next week. This move comes after the RBNZ was widely off the mark on first-quarter GDP, which came in at 1.6%. The bank had expected a gain of just 0.6%. The ANZ, the largest bank in the country, has projected that the bank will raise interest rates as soon as February 2022. 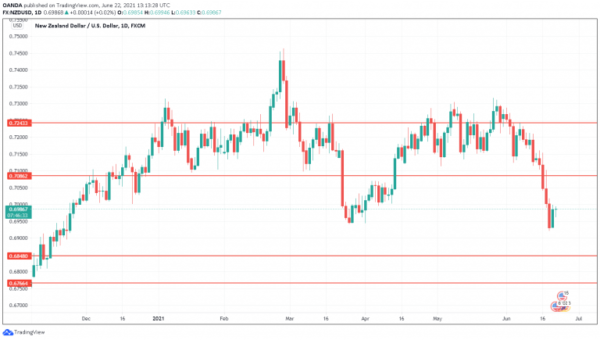