Week Ahead – ECB Meeting Poses Another Headache for Euro

The main event next week will be the ECB meeting, where the forward guidance will likely be changed to commit to negative rates for longer. That could cement the divergence with the Fed and other central banks that are moving towards higher rates. There’s also a volley of economic data while the earnings season gets rolling.

Another week, another scorching US inflation number that markets did not care much about. Most of the acceleration in inflation was concentrated in reopening-linked sectors, so both the Fed and bond markets continue to dismiss this phenomenon as something that will fade soon as supply chain disruptions ease.

The counter argument is that once the reopening momentum fades, other elements might step up to keep inflation hot. For instance, home prices have gone berserk this past year but rents haven’t followed suit, thanks to the eviction moratorium. The moratorium ends this month, so will rents fire up in August? Remember that ‘shelter’ holds one-third of the entire CPI weight. 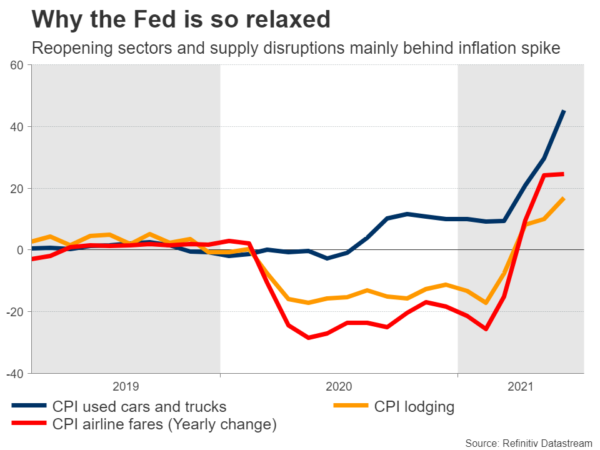 Meanwhile, many Republican-governed states have already cut the generous federal unemployment benefits, which will expire in September nationwide. This means that a flood of workers could return soon, making for some stellar jobs reports. Add on top the $4.1 trillion in new spending that Biden is trying to roll out, and it’s a recipe that can keep inflation going.

Long story short, America may not escape this inflationary environment as quickly as the Fed and markets currently think. With the economy approaching full employment and inflation riding high in the autumn, the Fed might have to slam on the brakes. This means less money printing and eventually higher interest rates, which is good news for the dollar. 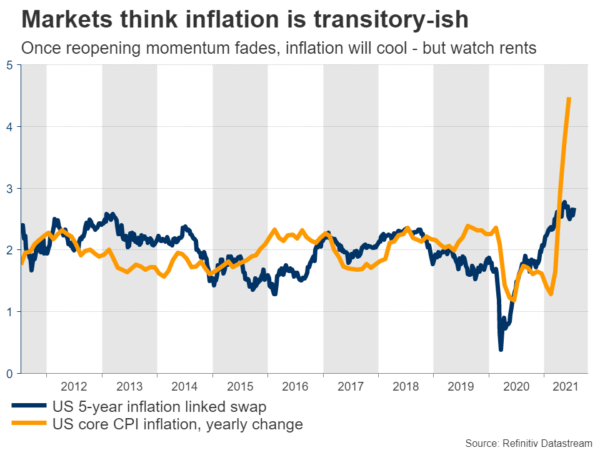 It’s a similar story in New Zealand, Canada, and to a lesser extent the United Kingdom. The RBNZ will end its asset purchases next week and markets are pricing in a 88% probability for a rate increase next month already. The kiwi hasn’t responded much so far as rising yields have been accompanied by rising inflation expectations, keeping real yields flat.

That could change soon. Inflation fears could ease as the RBNZ actually raises rates, allowing real yields to rise and boosting the kiwi, especially against the yen and the franc that will not be enjoying higher rates anytime soon.

ECB to lock itself into negative rates

All eyes will be on the European Central Bank on Thursday, after President Lagarde promised to deliver new policy signals at this meeting. The ECB recently raised its inflation target and policymakers want to demonstrate they are serious about hitting it. That’s done by signaling to the markets that rates won’t rise for a very long time.

Beyond committing to negative rates for longer, the ECB could also send a clear message that once its pandemic asset purchase program ends next year, it will likely be replaced by regular asset purchases. In short, more quantitative easing for longer. 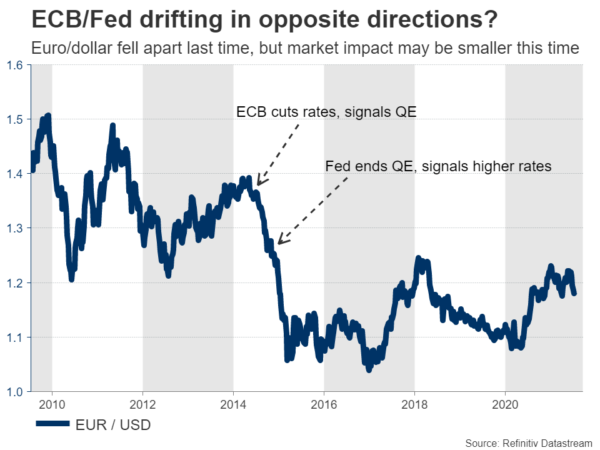 That’s bad news for the euro. With the ECB locking itself into negative rates but the Fed moving towards rate increases, yield differentials could widen further in the dollar’s favor, pushing euro/dollar lower over time. The last time these central banks drifted in opposite directions was in 2014-2015, a period of carnage for euro/dollar. The impact might be smaller this time as the ECB won’t be cutting rates like back then, but the direction is the same.

Beyond the ECB, the euro will also keep an eye on the preliminary PMI surveys for June, out on Friday. Economic reopening momentum remained strong in July, but the Delta variant that is spreading like wildfire is a threat. Spain, Portugal, and the Netherlands have seen new outbreaks. It’s almost impossible for governments to lock everyone down when half the population is vaccinated, but milder restrictions are plausible.

America and Britain await PMIs too

Over in the UK, Friday will bring the PMIs for July and retail sales for June. The British economy is humming along nicely and the data are likely to confirm that, despite the latest covid outbreak. Much of the population is now vaccinated and hospitalizations thankfully remain low.

A couple of Bank of England officials recently suggested the central bank should withdraw some stimulus soon, making the next meeting in August ‘live’. The BoE will likely signal that the end of asset purchases is close and set the stage for rate increases, which the markets are currently pricing in for next summer. That’s a favorable landscape for sterling.

The Markit PMI surveys from the US will also be released Friday, although traders usually pay more attention to the ISM surveys.

In the commodity currency sphere, the Reserve Bank of Australia will release the minutes of its July meeting on Tuesday. This was the meeting where the RBA slowed its asset purchases but repeated that rates are unlikely to rise before 2024, neutralizing the hawkish signal.

The latest shutdowns in Australia have thrown a monkey wrench into the RBA’s normalization plans, as vaccinations have also been slow. Unlike its kiwi cousin, the aussie won’t enjoy higher rates in the next few years, which spells downside risks for the aussie/kiwi pair. 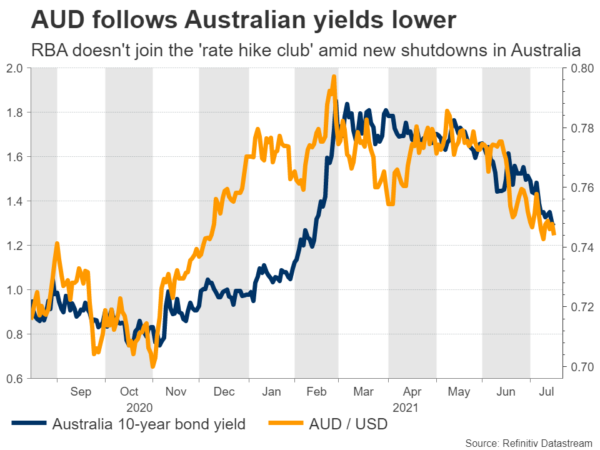 In Canada, retail sales for May will hit the markets on Friday. The loonie has taken a beating lately from the pullback in oil prices and a resurgent US dollar, but vaccination rates are high and the outlook for the economy remains bright with US spending benefits likely to spill over. The Bank of Canada seems set to raise rates by next summer.