GBP/USD Stuck Between A Rock And A Hard Place

Underpinned by an improving UK economy and undermined by a Federal Reserve slowly turning hawkish, the GBP/USD is stuck between a rock and a hard place as investors look forward to this week’s main events for this pair: the BoE’s policy decision later today and US non-farm payrolls report on Friday. 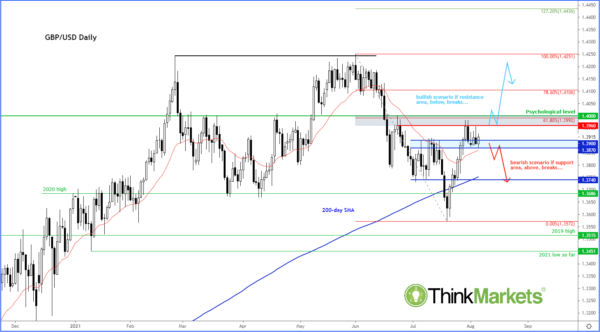 Support has been provided by the area between 1.3870 to 1.3900, while resistance comes in between 1.3960 to 1.4000. Between these ranges, the cable is residing inside no man’s land. Whichever side of the above ranges it eventually breaks out, expect to see further technical buying or selling in the direction of the break.

What to expect from the BoE today?

The need for emergency stimulus measures is receding but the BoE is unlikely to taper QE at this meeting. Still, the BoE may be unable to prevent the pound from appreciating, especially if there are a couple of dissenters at MPC meeting or if the Bank unexpectedly provides hints about when tapering will begin. Indeed, Britain’s respected independent economic research institute, NIESR, expects inflation to climb to 3.9% in early 2022. But like central bankers elsewhere in the developed world, Governor Andrew Bailey and his MPC colleagues are still seen calling for patience on scaling back QE on Thursday.

Hawks a bit more vocal at the BoE

The UK economy has been growing strongly in recent months as lockdown measures eased thanks to the rapid pace of vaccinations and previous lockdown helping to stem the spread of the virus. Although the delta variant has been spreading, new cases have been falling back in more recent days. This is unlikely to have hurt economic activity since all legal restrictions were lifted for England in a meaningful way. As a result, the Bank of England has become increasingly vocal about tapering QE, and the pound has responded by rising across the board. BoE’s Michael Saunders recently said that it “may become appropriate fairly soon to withdraw some stimulus.” Saunders said that would be appropriate so long as economic activity and inflation indicators remain in line with recent trends, and downside risks to growth and inflation do not rise significantly. The hawkish comments from Saunders and those from Ramsden before have led to some speculation that the August MPC meeting could be a live one.

However, I don’t think the BoE will move that soon to end asset purchases, but it could nevertheless prepare the market for tapering in the months ahead. This is because inflation is expected to fall back after rising well above the Bank’s 2% target as the impact of temporary factors putting upward pressure on prices recede. What’s more, many economists, including those at the BoE, envisage a jump in UK unemployment rate as we approach the end of furlough, with some 1.9 million people still on the scheme. You also have the potential for new, deadlier, variants of Covid to emerge, while Delta continues to wreak havoc around the world.

Against this backdrop, the BoE is not going to be in hurry to start the normalisation process of its monetary policy, even if the UK economic growth this year is expected to surpass the G7. Therefore, the central bank’s £875 billion bond buying programme is likely to remain intact. Needless to say, interest rates won’t be hiked either.

Could the pound still find support on BoE inaction?

Absolutely. If we see a couple of dissenters at the MPC, this could trigger a rally in Sterling as it will increase the probability of a sooner-than-expected taper in the future policy meetings. Also, there’s the possibility the BoE could provide some insights about how it will eventually reduce its QE programme, which the market may interpret as a hawkish sign.

So, while QE in unlikely to be tapered at this meeting, this outcome is likely to have been priced in. Therefore, any hawkish signs that might emerge from the rate statement or meeting minutes could still underpin the pound, especially against currencies where the central bank is expected to remain dovish longer than the BoE, such as the as euro.

Thus, the EUR/GBP may finally break below that 0.8500 key support. The next bearish targets below this hurdle will be the liquidity resting beneath April’s low at 0.8470ish, followed by last year’s low that was made in February at 0.8280ish, which happens to be very close to the 2019’s low at 0.8277. In other words, big levels are at risk of being taken out. The Chunnel just needs a push to get us there.

However, in the event of a dovish surprise, it would be best to look at selling the pound against a stronger currency than the euro.

The US Federal Reserve is just waiting for employment to improve further before starting to reduce the pace of its asset purchases, with inflation already well above the central bank’s target and rising. The world’s largest economy is about 6 million or so jobs below the pre-pandemic level. The employment trend has been strong. If we get one or two really good jobs reports over the next couple of months then the conditions for starting the normalisation process will have been met for many of the Fed’s policy makers. This makes the upcoming jobs reports very important. Stay tuned, as we will later provide a preview for the July NFP data.