Week Ahead – German Elections, China Woes, and Tons of Data

An action-packed week lies ahead. Elections in Germany will be crucial for Eurozone’s spending agenda, while Japan’s ruling party will also select its new leader. Meanwhile in China, the Evergrande fallout is unlikely to spiral out of control, but the upcoming PMIs will tell us whether it has already started to infect economic growth. There’s also a heavy dose of data releases from the major economies and a rare meeting of the G4 central bank governors.

The Fed meeting this week did not disappoint. Chairman Powell essentially signaled that the tapering process will begin in November absent a catastrophe, while the new interest rate projections showed the FOMC is now split evenly on whether interest rates will be raised next year. He also downplayed the impact of Evergrande and spillover risks to America. 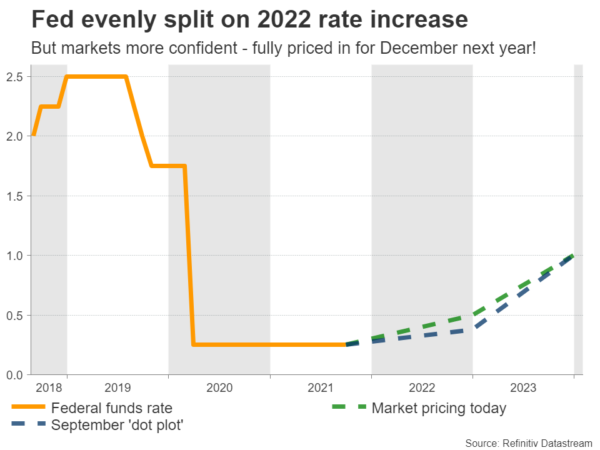 Despite this hawkish message, the dollar has struggled to maintain its gains. That probably comes down to some market relief that Evergrande won’t collapse in a disorderly fashion, which has taken the shine off the reserve currency for now. Someone is listening to the Fed though, as futures markets have fully priced in the first rate increase for December 2022, pushing Treasury yields higher.

The main question now is how quickly the tapering process will be completed and whether an even earlier rate hike – say September 2022 – is possible. Indeed, it might be. Inflation could remain elevated for a while as supply disruptions aren’t getting better, consumption is far higher than pre-crisis levels, the labor market will likely return to full employment next year, and Congress might put a floor under growth by approving a massive spending bill. 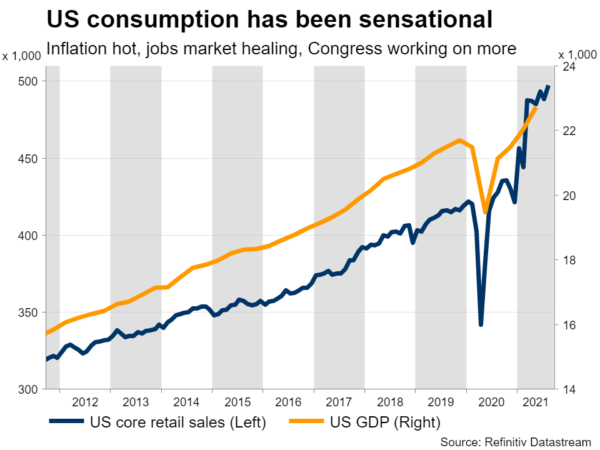 In short, the overall picture for the dollar remains quite encouraging as the Fed out-normalizes the ECB and BoJ. As for next week, there’s a barrage of US data, starting with durable goods orders on Monday. Then on Friday, personal income and consumption numbers, along with the Fed’s favorite inflation metric are due out. But the most important release will be the ISM manufacturing PMI for September, which will give us a taste of what to expect from the next jobs report.

The wind of political change is blowing in Germany. Voters will go to the ballots on Sunday, in an election that could bring an end to decades of strict budget rules. No single party is likely to achieve a majority, therefore strategic alliances will need to be forged.

Opinion polls currently favor the Social Democrats, led by finance minister Olaf Scholz. He oversaw the economic battle against the pandemic, so he’s considered an experienced crisis manager. In second place is Merkel’s conservative CDU party, whose new leader – Armin Laschet – hasn’t really resonated with the public. The Greens are in third place and will likely be the kingmakers of this election. 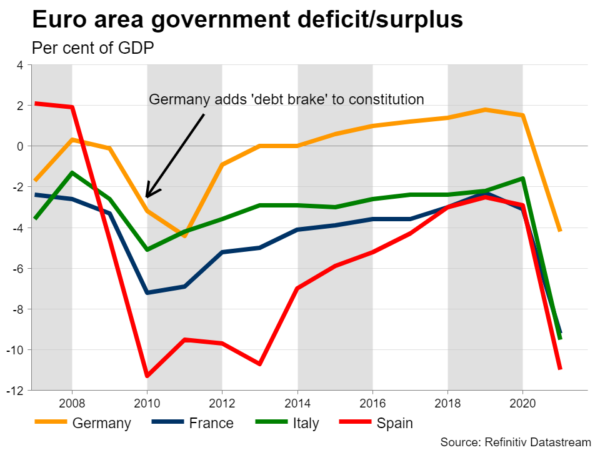 The most likely outcomes are either a center-left coalition spearheaded by the Social Democrats or a center-right coalition led by the CDU. The left alliance is the highest probability scenario according to polls and betting odds. That would allow for greater investment both domestically and on a European level, so the euro could storm higher as investors recalibrate their expectations for economic growth.

On the flip side, a CDU-led coalition would signal a continuation of conservative policies, with less spending and an eventual return to balanced budgets. There would also be pressure on other EU countries to follow suit, slowing the recovery. That’s a euro-negative cocktail.

The catch is that the winning coalition probably won’t be known for several days or even weeks while the parties negotiate. Therefore, if the outcome is close and the ultimate winner isn’t clear, the euro’s initial reaction might be a gap lower on Monday amid the uncertainty. 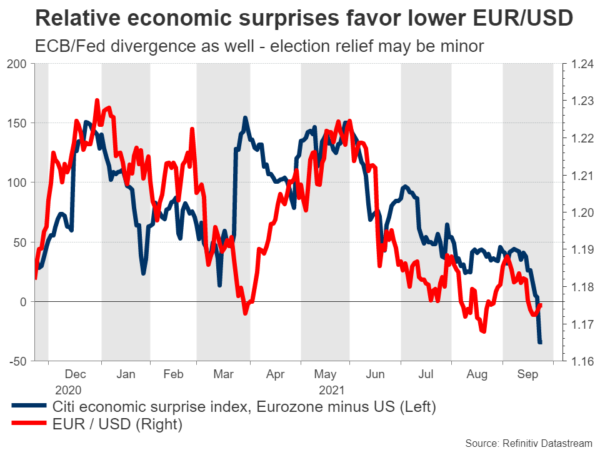 Beyond the election, there is an ECB forum on central banking on Wednesday. We will hear from the chiefs of the ECB, BoJ, Fed, and BoE, so it should be quite interesting for FX markets. The latest inflation data from the Eurozone will also be released Friday and might reflect the soaring energy prices across the continent.

Japan gets a new leader too

In the land of the rising sun, the ruling LDP party will host its leadership election on Wednesday. The winner is almost guaranteed to become the next prime minister because of the party’s majority in parliament but may not keep that position for long as there will also be a national election in the next two months.

The three frontrunners in the LDP election are Taro Kono, Fumio Kishida, and Sanae Takaichi. Kono is leading the race and supports a spending package that focuses on boosting wages and growth. He has also urged the Bank of Japan in the past to outline an exit strategy from cheap money, so he might replace Governor Kuroda with someone less ‘aggressive’ when his term expires in 2023. 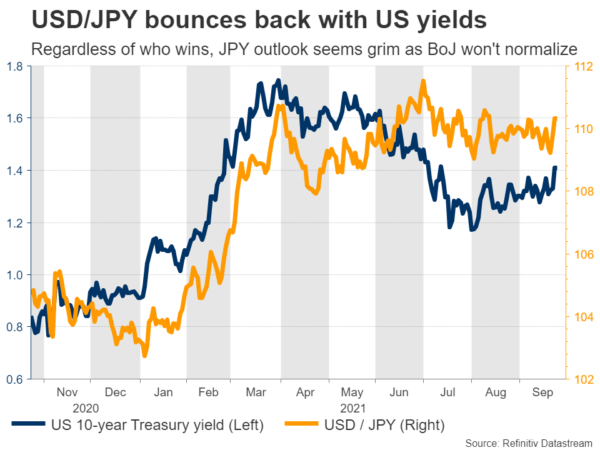 Kishida is more conservative. He favors higher spending but has advocated for balancing the books in the past and has warned that BoJ stimulus cannot last forever. Finally, Takaichi is the exact opposite. She favors massive government spending and ultra-loose monetary policy.

For the yen, the best-case scenario might be Kono, given his incentives for businesses to raise wages and the prospect of a more conservative BoJ Governor. On the flipside, Takaichi would imply a continuation of ‘Abenomics’, which is bad news for the currency. Politics aside, the BoJ will also release its quarterly Tankan business survey on Friday.

Of course, how the Evergrande situation evolves could be infinitely more important for market sentiment. At this stage, it looks like any contagion effects will be mostly contained to the local property sector and not spill over into the financial system. There are reports that the Chinese government is working on a restructuring deal that would effectively prevent contagion and protect domestic investors. 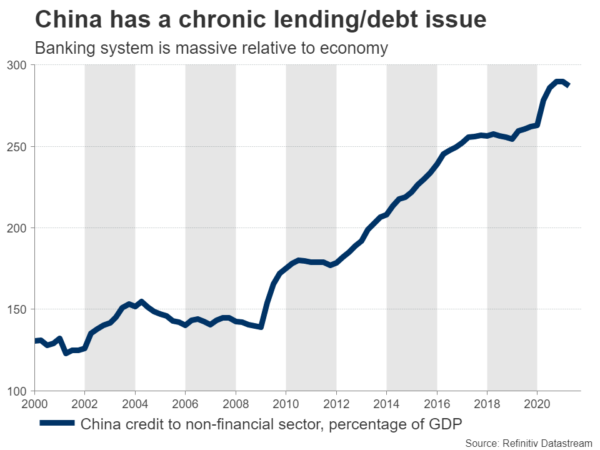 The real issue is whether this will lead to a massive hangover in the real estate sector, which accounts for nearly 30% of GDP. China’s economic data pulse was already slowing down, so this calamity could suppress growth further. And the authorities can’t simply ‘juice up’ the economy with a flood of cheap money like in the past, as the banking sector is quite over-levered.

That’s why the nation’s PMI business surveys for September will be closely watched on Thursday. If the economy continued to lose momentum even before the Evergrande debacle, that could inflict some damage on China-sensitive currencies like the Australian dollar.