US equities slipped on Tuesday as Treasuries jumped to the highest level in more than three months. The Dow Jones index declined by more than 600 points while the S&P 500 and Nasdaq 100 index fell by more than 90 and 400 points, respectively. The technology sector was among the worst-performing in Wall Street as fears of a more hawkish Federal Reserve rose. The yield of the 10-year Treasury bonds rose to 1.53% while the 30-year rose to 2.07%. While investors believe that the economy is doing well, there are concerns about how this growth will continue when the Fed starts tapering its asset purchases.

The US dollar index rose to the highest level in months as investors rushed to its safety as global risks rise. In the US, there is a risk that the country will run out of money if Congress won’t raise the debt ceiling. In testimony in Congress, Janet Yellen said that the government will run out of funds by October 16. Also, there is the ongoing risk of energy prices. China, the second-biggest economy in the world, is facing a major electricity shortage. Similarly, in the UK, many petrol stations have shut down because of the shortage of truck drivers. There is also the ongoing risk of Evergrande, the second-biggest real estate company in China.

The economic calendar will have some key events today. Later, the US will publish the latest pending home sales numbers. The data is expected to show that pending home sales increased by 1.8% in August after falling by 1.4% in the previous month. On Tuesday, S&P CoreLogic Case-Shiller National Home Price Index rose 19.7% in the first seven months of the year. That was the highest level on record. Other key numbers scheduled for today are the EIA inventory data, Canada’s retail and industrial price index, UK mortgage data, and Eurozone’s consumer and business confidence data.

The EURUSD has been in a strong bearish trend in the past few weeks. The pair has managed to move from a high of 1.1905 to a low of 1.1670. On the four-hour chart, the pair has also formed a descending channel and moved below the 25-day and 15-day moving averages. The MACD has remained below the neutral level while the RSI is at 40. The pair is also approaching the key support level at 1.1662. Therefore, there is a likelihood that the pair will maintain a bearish trend as bears target the next support at 1.1600. 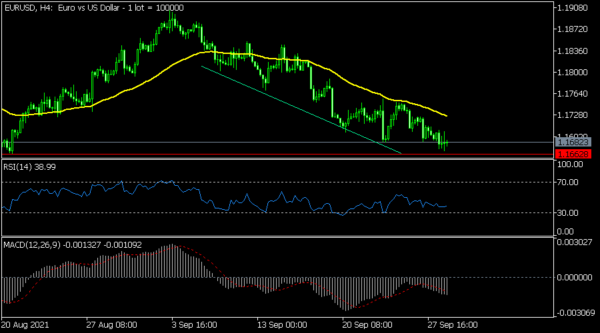 The Nasdaq 100 index tumbled sharply as the sell-off of technology stocks continued. The index declined to a low of $14,470, which was a few points below last week’s low of $14,815. On the four-hour chart, the index has dropped below the short and long term moving averages. It has also moved below the lower side of the bearish flag pattern while the MACD has declined to the lowest level since September 20. Therefore, the index will likely keep falling with the next key support being at $14,500. 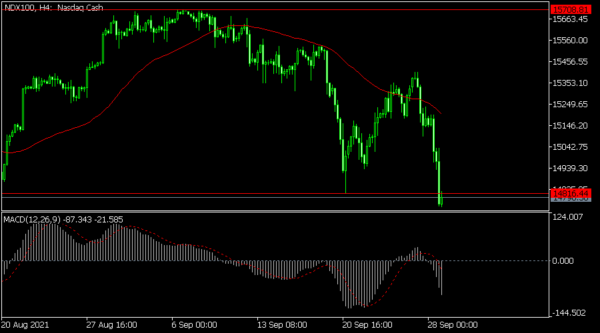 The GBPUSD crashed hard as the energy crisis in the UK coincided with a jump in US Treasuries. The pair fell to a low of 1.3520, which was the lowest level in more than 7 months. It declined below the key support level at 1.3600 while the Relative Strength Index (RSI) moved to the oversold level. The MACD has also moved below the neutral level. Therefore, the pair will likely keep falling in the near term. 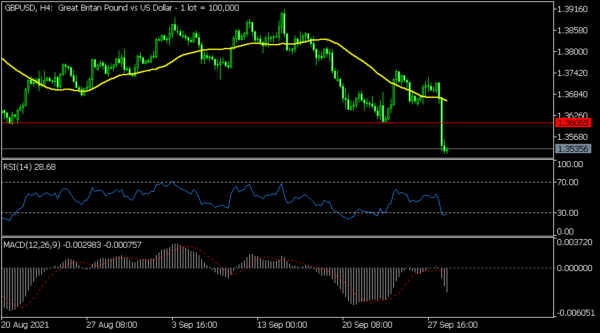