Week Ahead – US Inflation in Focus as Energy Fears Cool

Panic around the energy crisis faded a little after Russia offered Europe a helping hand. Stock markets came back swinging but the FX complex didn’t see much relief, with the mighty dollar holding everything else down. Looking into next week, the inflation/growth story will remain front and center with the release of American CPI numbers and retail sales, as well as the latest Fed minutes.

The US dollar has reclaimed its throne as king of the FX arena, slicing through its rivals as investors looked for shelter from the storm in equity and energy markets. From paralyzed supply chains to an energy crisis that threatens to cripple Europe and Asia, there’s a real risk that global growth slows but inflation remains hot.

And with bond yields rising everywhere because of inflation concerns, the dollar is almost the last defensive hedge left across all asset classes. Neither bonds nor gold nor the yen are attractive in an environment of rising yields. 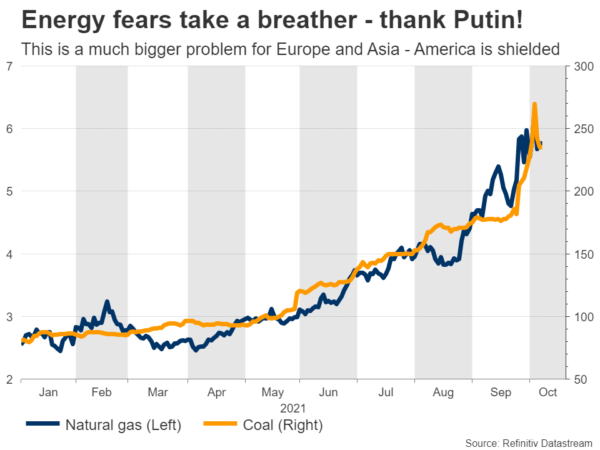 On top of everything, the American economy is heavily shielded from the power shortages thanks to its self-sufficiency on energy, and Congress is likely to deliver another massive spending package soon to power up the recovery. The fallout from the energy fiasco will probably impact Europe and Asia much more, hence the euro’s inability to recover even after Vladimir Putin promised to release more natural gas.

The other risk that haunted euro/dollar lately was the ghost of monetary policy divergence. The Fed is almost certain to dial down its asset purchases next month and markets are pricing in the first rate increase for December 2022, whereas the ECB is apparently ‘studying’ a new bond-buying program for next year when the emergency purchases end. 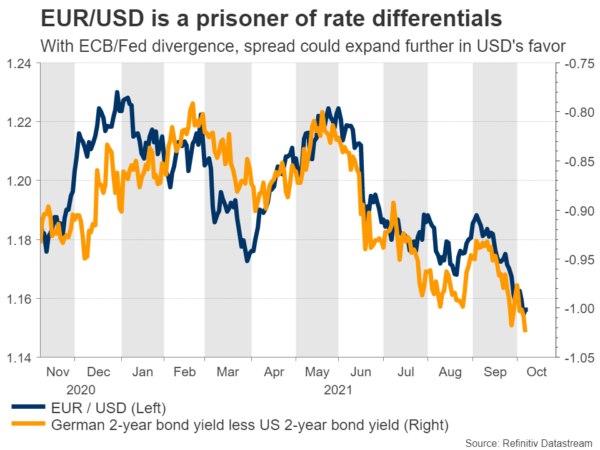 As such, the outlook for euro/dollar remains negative amid central bank divergence, demand for defensive plays, and America escaping a global slowdown with only minor injuries. The risk is that the Fed gets cold feet because of the unstable global environment and delays its normalization plans. But if the situation gets that bad, markets would probably be in panic mode so safe-haven demand could keep the dollar’s losses to a minimum.

Staying in America, the upcoming week promises to be quite exciting. Inflation numbers for September will be released on Wednesday, a few hours before the minutes of the latest FOMC meeting. Then on Friday, retail sales for the same month are due out.

The headline CPI rate is forecast to have ticked back up to 5.4% after a small dip in August, while the core rate is expected unchanged at 4.0%. Meanwhile, retail sales are projected to have declined a touch, but most of this weakness likely comes down to vehicle sales as the core figure that excludes those is expected to have risen. Combined, these would suggest inflationary forces remain strong and consumption healthy. 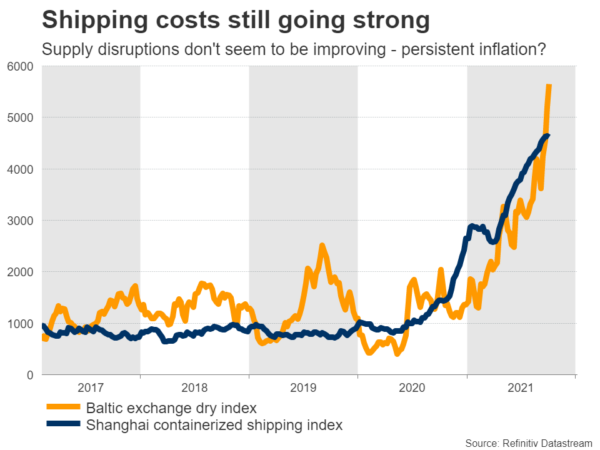 As for the minutes, this was the meeting when the Fed signaled it would taper its asset purchases soon absent some catastrophe in incoming data. Investors will therefore look for any hints around how many months the taper process could take. The conversation around whether inflation is transitory or persistent will also be interesting considering that supply chain disruptions don’t seem to be improving.

In the UK, the jobs report for August will hit the markets on Tuesday, ahead of GDP stats for the same month on Wednesday. Sterling enjoyed a wild rollercoaster ride lately, falling initially alongside stock markets but then recovering powerfully as investors started to price in more aggressive rate increases by the Bank of England to fight inflation.

Markets have almost priced in the first quarter-point rate increase for February, with another one to follow by June. This drastic shift boils down to inflation expectations. When central banks say inflation is ‘transitory’, the only way they can be confident about that is if inflation expectations remain stable, which shows that investors agree inflation will fade soon.

In this case, the opposite has happened. British inflation expectations skyrocketed lately, so markets now believe inflation will be persistent, likely because the UK is suffering more severe supply disruptions than most countries. Unfortunately, this might ultimately be a policy mistake. Central banks can’t fix broken supply chains, so by raising rates prematurely, that would simply slow down demand and by extension the recovery itself. 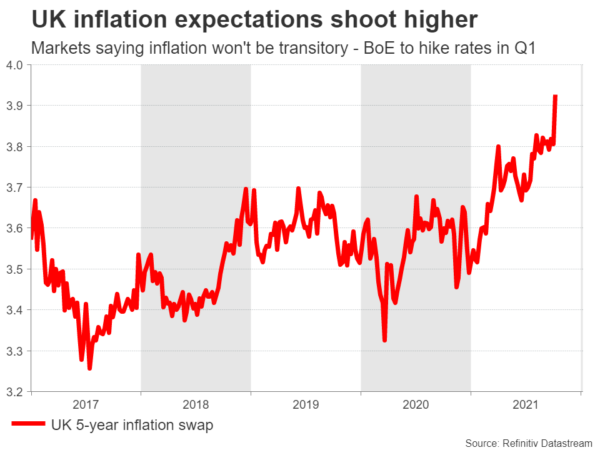 As for the pound, the outlook seems neutral at this stage. The BoE is already priced very aggressively, so the currency is unlikely to receive any more support from monetary policy. Instead, sterling’s fortunes will likely depend on how risk sentiment fares – whether stock markets continue to recover or whether energy and supply chain fears make a comeback.

Over in China, trade numbers for September will be released Wednesday, before inflation figures for the same month on Thursday. These will be closely watched amid worries that the economic recovery is losing steam, as a painful deleveraging in the real estate sector has joined forces with power shortages that have plagued heavy industry.

The result might be a ‘stagflation light’ environment, whereby growth slows because of supply limits but inflation heats up as companies pass some of the higher costs down to consumers. This would inevitably impact the West too – if Chinese factory prices fire up, inflation would be exported across the world. Hence, all eyes will be on the upcoming producer prices, which are expected to have accelerated. 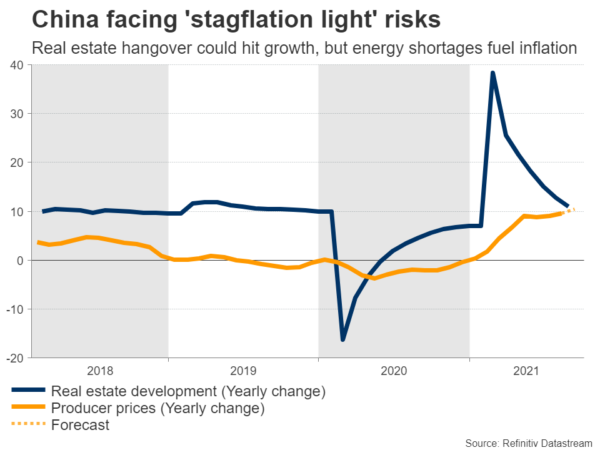 Finally in Australia, the jobs report for September is out on Thursday and expectations are for another round of sharp losses in employment, reflecting the recent lockdowns. That said, markets already know this was a tough month, so the aussie is more likely to be driven by the outlook for global growth, the energy crisis, and how the Chinese economy performs.