In a crowded week for Canadian data releases, we expect the headline CPI inflation rate to stand out. The measure will likely accelerate to 4.9% year-over-year from 4.7% in November. Omicron-related weakness in energy products is expected to have been offset by persistent strength in expenses tied to home and car purchases. Indeed, this is largely what we saw in U.S. CPI releases last week. Combined, homes and cars explain roughly half of the inflation in Canadian core CPI (excluding food and energy products) relative to pre-pandemic (February 2020) levels. As weaker prices early in the pandemic—especially for energy products—drop out of the year over year calculation, we expect the headline inflation rate to plateau before dialing lower in coming months. But even as those distortions fade, price pressures from ongoing supply chain challenges, higher input prices, and strong consumer demand will continue to broaden. Almost 60% of the consumer price basket has already been growing at a more than a 2% annual rate compared to pre-crisis levels.

Next week’s Q4 Bank of Canada Business Outlook Survey (BOS) will be carefully scrutinized for further evidence of those price pressures. Capacity limits—including difficulties in sourcing and retaining both capital and labour—already topped business concerns in prior editions of the survey. There were tentative signs that supply chain pressures were easing late last year as the surveys suggested supplier delivery times had edged lower and Canadian auto production bounced back from disruptions tied to the global semiconductor shortage. But labour shortfalls are expected to remain a key obstacle for business growth. The latest BOS survey period (mid-November to early December) came too early to capture the full impact of Omicron, but the rapid spread of the variant and large numbers of workers required to self-isolate are likely adding to labour shortages in the near-term. The tone of the Bank of Canada commentary will be watched closely for hints at how worried the bank has grown over the latest COVID wave. However, with the economic impact of Omicron expected to be relatively short-lived and inflation and capacity pressures persisting, we don’t expect a delay in rate hikes. Central bank communications in January will likely be used to signal the first increase in March or April. 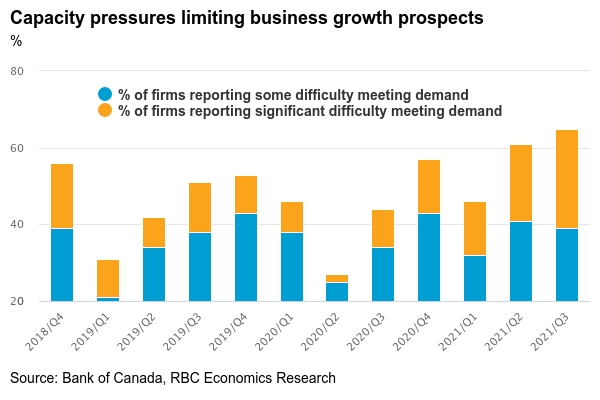 We see no reason to deviate from StatCan’s early estimates of a 3.1% increase in manufacturing sales for November. The increase was driven in part by higher auto production as supply chain issues eased, at least temporarily, and came despite significant transportation disruptions due to severe flooding in B.C. late in the month.

Our forecast for retail sales is in line with the advance estimate from StatCan of 1.2% for November. Our latest tracking of consumer spending suggests sales of merchandise dipped lower in December. Spending on services is not captured in the monthly retail sale data, but there was a much larger pullback in travel spending in December.

Canadian housing starts are expected to have remained solid at 270k in December after a larger 301k add in November, in line with still-strong levels of building permit issuance in recent months. 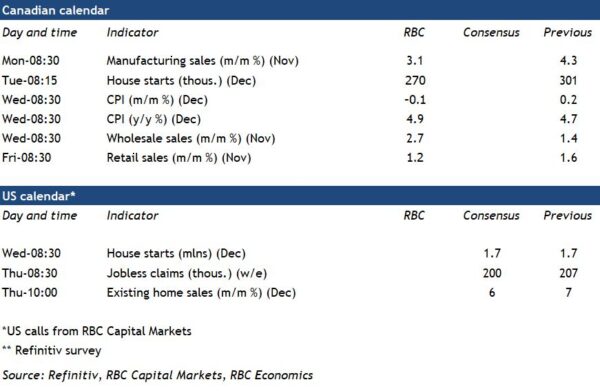