With the Bank of Canada’s July interest rate decision looming, all eyes will be on next week’s business outlook and consumer surveys. The bank’s Q4 Business Outlook Survey (BOS) will very likely identify limits on production due to labour shortages as the biggest issue for businesses. There have been signs of easing in global supply chain disruptions. Shipping costs in particular are down sharply year-to-date. But inflation has continued to surge, and the bank will be concerned about that pressure seeping further into longer-run expectations.

Following an uptick in medium-term consumer inflation expectations, the U.S. Fed announced a 75 basis point rate increase earlier this month. A similar uptick in Canada would raise the odds of the BoC following suit with a hike at least as large. The last BOS for Q1 showed business inflation expectations surging higher for the next 2 to 3 years, then holding around the central bank’s 2% price growth target beyond that. The separate survey of consumer expectations suggested a similar view. But with inflation continuing to surprise on the upside, the risk is both move higher.

Friday’s labour market data won’t give the bank any pause about moving too quickly. We expect Canadian employment growth slowed to 15,000 in June—driven by a dwindling supply of workers rather than a lack of demand. The number of job openings edged lower, but is still running almost 70% above pre-pandemic levels. And with the unemployment rate already at its lowest level on record in May, those businesses are competing shrinking number of available workers. The travel and hospitality sector in particular has struggled to re-staff as demand soars. 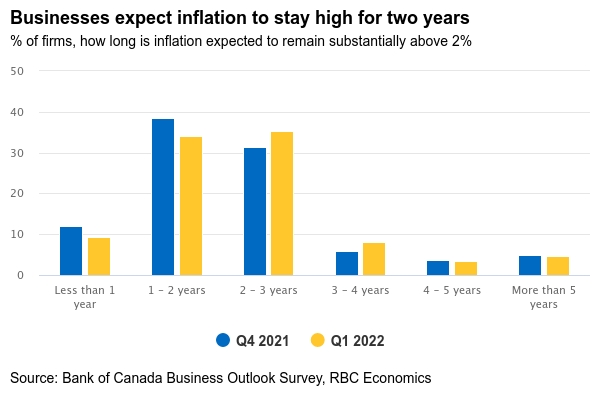 We expect an increase of 300,000 jobs in the U.S. in June fuelled by the recovery in close-contact service industries. As in Canada, tight labour markets will continue to limit employment growth. The unemployment rate is expected to hold steady at 3.6%
The Canadian trade surplus likely edged up to $2 billion with a jump in oil prices boosting the energy trade balance. 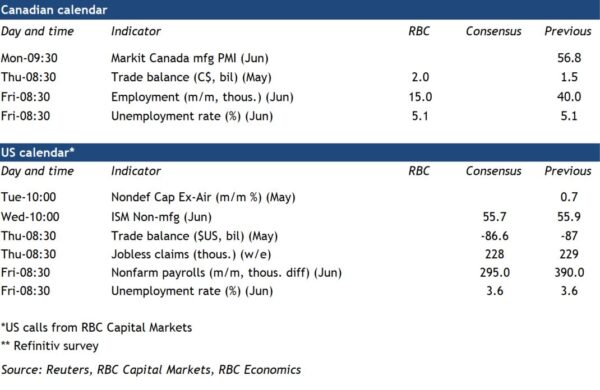