Exceptionally tight labour market conditions showed no sign of loosening in June. And next week’s Survey of Payrolls and Hours (SEPH) is expected to reinforce that message. Employment growth has slowed—as small outright declines in already-reported labour force surveys for June and July showed. But that has more to do with a shortage of workers than a lack of hiring demand. Job vacancies (reported in the SEPH data) were over a million in April and May. That’s double the annual average of 540,000 in 2019. Job postings from indeed.com were still running almost 70% above pre-pandemic levels in June, before ‘slowing’ to more than 60% higher in July. Wage growth, unsurprisingly, has accelerated—particularly in the accommodation and food services sectors which accounted for an outsized 20% of the rise in unfilled jobs from pre-pandemic levels. SEPH’s fixed weight index of average hourly earnings rose to 4.9% in the three months to May, almost twice the average 2.3% pace of growth over the five years before the pandemic.

We expect elevated demand for workers, especially in the close-contact and travel industries, to continue through this summer. Beyond then, consumer spending will slow more significantly across a widening array of goods and services as inflation and higher interest rates cut into household purchasing power. There’s still substantial excess demand in job markets to keep unemployment low in the near-term, but aggressive Bank of Canada rate hikes will soften consumer appetites and, we expect, also start to cool overheated labour markets in the second half of the year. 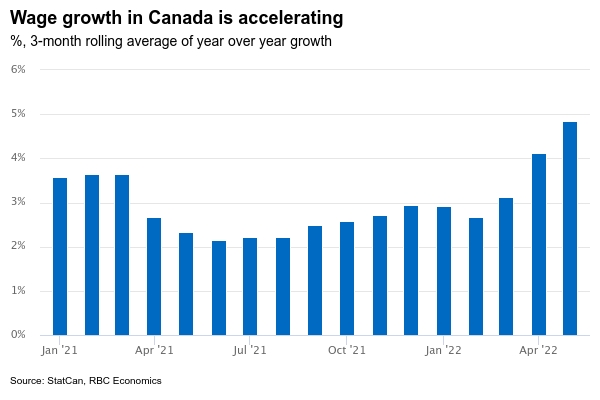 Advance wholesale and retail data for July should offer a first glance at domestic production growth in Q3. Declines in manufacturing sales over May and June likely extended into July, given sharply lower prices for petroleum and coal products. 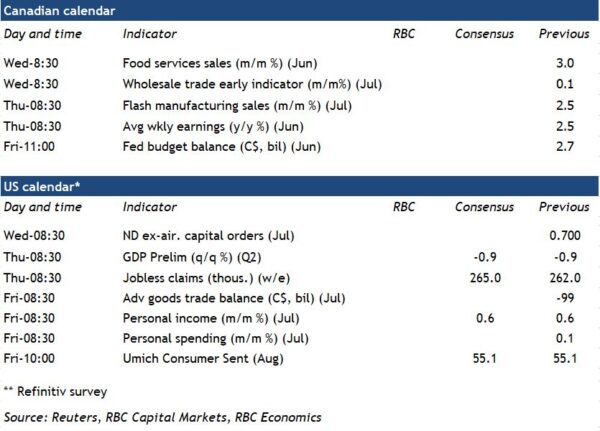