The Bank of England will hold a two-day monetary policy meeting this week – it’s first for 2018 – with the announcement expected on Thursday at 12:00 GMT. The Governor, Mark Carney, gave investors a peek as to what to expect from the Bank on ‘Super Thursday’ during a hearing before the House of Lords Economic Affairs Committee in Parliament last Tuesday. Expectations of a Spring rate rise have been rising since but growing unrest within the Conservative party, which has once more cast doubt about Theresa May’s future as prime minister, threatens to bring fresh chaos to the Brexit process.

With no change in rates expected for the February meeting, all eyes will be on the Bank’s quarterly inflation report, which will contain revised forecasts on economic growth and inflation. Although the latest indications suggest the effects on prices from the pound’s depreciation after the Brexit referendum are diminishing, the Bank is concerned that inflation may not fall back towards the 2% target quick enough without any BoE action and that a tightening labour market could soon push up wage pressures. 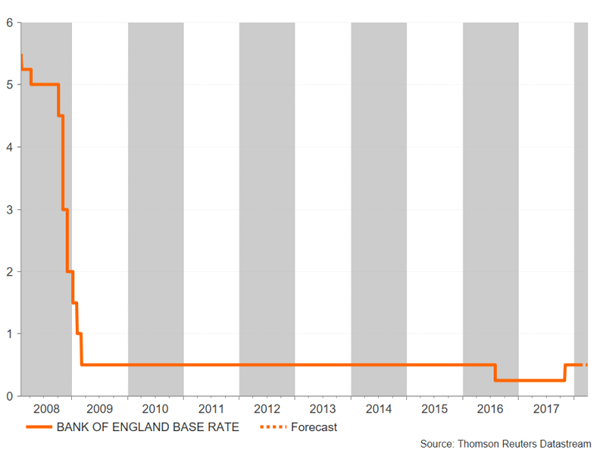 Fourth quarter GDP figure, which came in above expectations at 0.5% quarter-on-quarter, and a surprisingly strong set of jobs data for the November period support the case for additional rate hikes by the BoE in the coming months. However, UK growth is still lagging most of its peers in the G7 and data released on Monday pointed to a weak start for the country’s dominant services sector. The IHS Markit services PMI fell far short of expectations in January, dropping from 54.2 to 53.0 – the slowest since September 2016. 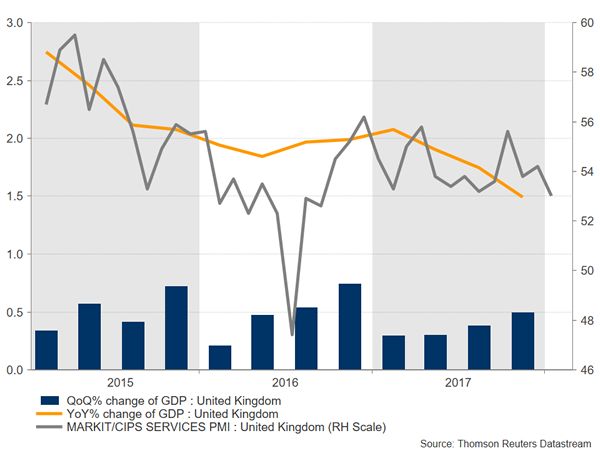 The pound lost ground versus the dollar and the euro after the data, with cable moving away from last week’s high of 1.4277, when it rose on the back of expectations that the next increase in UK rates could come as early as May. However, renewed political risks added to sterling’s woes, pushing the currency to a two-week low of $1.3935 and to a three-week low of 0.8891 pounds per euro on Tuesday.

UK prime minister, Theresa May has come under heavy criticism from members of her own party over the past week for her ambiguous Brexit strategy and weak leadership, fuelling speculation of a possible vote of no confidence that would force her resignation. With time running out in the Brexit negotiations with the EU, and a looming March deadline for reaching an agreement on a transition deal, a leadership challenge couldn’t come at a worst time.

The question now is whether the Bank of England will stick to its increasingly hawkish rhetoric or return to a more cautious stance given the uncertainty still hanging over the UK’s economic outlook. In his remarks to Parliament last week, Carney sounded more confident about wages picking up in the next few years and said, “as slack in the economy has been taken out, we move into a more conventional area for monetary policy”. A stronger global economy and a weaker pound have improved the prospects for Britain’s economy, offsetting some of the impact from the slowdown in consumer spending and business investment.

However, the Bank may refrain from taking a too-hawkish tone in February in the event of a delay in reaching a Brexit transition deal in March, which would make a May rate hike difficult. Most economists still expect the BoE to wait until November before raising rates again but the shifting market expectations are generating volatility in sterling.

The strongest signal of a near-term rate increase that could emerge is if the Monetary Policy Committee (MPC) hawks, Ian McCafferty and Michael Saunders, vote for a rate hike on Thursday. This could drive the pound back above key resistance around $1.4120. But if the MPC vote unanimously to hold rates and the BoE’s latest economic projections are revised only modestly higher, sterling could struggle and fall below recent support at $1.3935, opening the way towards $1.3850.

RBNZ’s Next Move could be Rate Hike

Signs that the Spread of the Coronavirus is Slowing Down

RBA Statement on Monetary Policy Sets Out Key Themes for 2020