The US dollar is mixed ahead of the release of the minutes from May’s Federal Open Market Committee (FOMC) meeting. The central bank held rates unchanged but there is almost 100 probability of a 25 basis points rate hike at end of the June 13 meeting. Commodity currencies were higher at the beginning the North American trade session only to fall as commodity prices gave way. Safe haven currencies rose after US President Trump said the June 12 Peace summit between North and South Korea could be delayed.

EUR Still on Backfoot due to Italian Politics

The EUR/USD lost 0.07 percent on Tuesday. The single currency is trading at 1.1783 ahead of the release of the notes from the Fed’s monetary policy meeting. The EUR is still struggling with the fallout of the Italian coalition. The latest from the union between the 5 Star Movement and the League is the nomination of Giuseppe Conte as prime minister. The lack of experience from the lawyer and academic did not inspire much confidence with the markets. 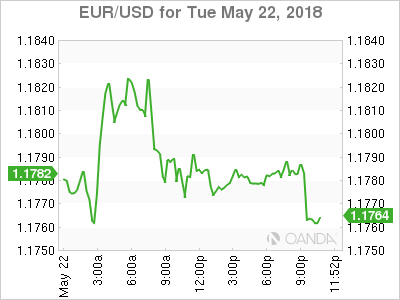 With rise of euro scepticism in the area the last thing needed was criticism from German economists who do not agree that the deeper integration proposed by French President Emmanuel Macron. 154 German economists criticized the call to protect the currency union and instead bring back the argument that economic reform is needed with member states who are struggling. Also opening the door to creating an orderly process for nations to exit the Union.

The economic calendar this week will not any major releases with mostly lagging indicators in the agenda. European producer managers index (PMIs) and the minutes fro the European Central Bank (ECB) meeting could offer some insight but investors are looking forward to more guidance from the central bank which so far has remained very quiet on what are its plans after the massive quantitive easing program runs its course in September.

Loonie Gets Commodities and Trade Boost

The USD/CAD appreciated 0.26 percent in the last 24 hours. The currency pair is trading at 1.2819 as the loonie bounced back during the Asian trading session from disappointing retail sales data on Friday and a long weekend after the Victoria Day holiday. Commodity prices rose as the USD rally ended after trade tensions eased with China. Strong commodities in particular oil prices boosted the CAD as well a strong signal the US is more open to trade negotiations as the fate of NAFTA remains to be decided. Energy prices could not maintain the upward momentum and West Texas Intermediate fell below $72 but geopolitics is keeping energy prices at 3 year highs. 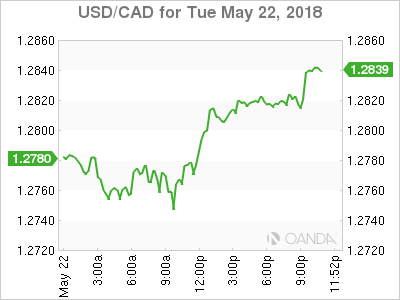 The economic calendar this week will be dominated by the release of the Fed minutes. The market is pricing in a June rate hike and investors will scan the notes from the Federal Open Market Committee (FOMC) looking for further clues on the path of monetary policy. Fed members have supported two or more rate hikes this year. The Bank of Canada (BoC) is expected to hold its rate untouched in May at 1.25 percent after a string of soft data is not putting as much pressure as earlier in the year.

Core retail sales dropped by 0.2 percent instead of the 0.5 percent expected growth. Tuesday’s release of wholesales sales beat the forecast with a 1.1 percent gain and an upward revision to the previous 0.8 percent loss that now stands at –0.4 percent.

West Texas Intermediate is trading at $71.98 and trading near 3 year highs due to geopolitical events. The fundamentals of the energy markets call for a lower valuation as demand has not grown to levels that justify current prices. The Organization of the Petroleum Exporting Countries (OPEC) agreement with other major producers, most notably Russia, accomplish the goal of stability but it is now the uncertainty in the Middle East that drives price action. 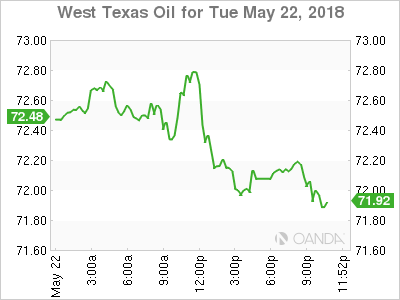 Investors are aware of a risk that a rapid decline could come, but it could be achieved only if there is political stability in the region, a long shot at this point. Or if there are significant changes in how big oil producers not part of the deal react to higher prices. The US has slowly ramped up their production but with fundamentals only in the periphery at this time it could be some time before the market prices in higher oil production.

The situation in Venezuela and Iran could end up keeping prices at 3 year highs as supply disruptions have been the most effective factor dictating crude prices. Timing wise the start of the driving season in North America will be supportive as season demand rises.
Market events to watch this week: