GBPCAD has been on a downtrend since the beginning of May, sliding to a two-year low of 1.5874 on Friday. The downside pressure has eased somewhat this week with momentum indicators pointing to a weak positive movement. The RSI is rising but has some way to go before escaping out the bearish territory above 50. The stochastic oscillator is also signalling an improved bias in the short term, with the %K line crossing above the %D line, though they both remain close to oversold territory.

A break above the 50% Fibonacci would clear the way for the 50-day moving average (currently at 1.6423) and this could mark the start of a switch in the medium-term outlook from bearish to neutral.

However, if the positive momentum fizzles out, prices are likely to seek support initially at the 200% Fibonacci extension at 1.5848. A drop below this level would reinforce the bearish picture and the bears would next target the 238.2% Fibonacci at 1.5735 and the 261.8% Fibonacci at 1.5665. 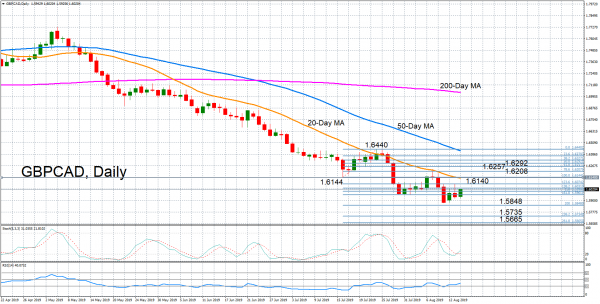