WTI oil futures are trading around the 57.11 area, which is the 50.0% Fibonacci retracement of the down wave from 63.22 to 50.98, with an undecided direction in hand. Oil has realigned with the positive picture, climbing above 56.90 but then adopted a range (55.66 – 57.83) in the last week, something also viewed in all the Ichimoku lines as they have converged.

The short-term oscillators suggest that directional momentum has disappeared but lean towards a positive outlook. The MACD and its red trigger line are barely above zero, while the RSI flirts with its neutral mark, having moved slightly into the bullish region. Moreover, the bullish crosses of the 50- and 100-period simple moving averages (SMAs) and the Ichimoku cloud, further back an improving picture.

To the downside, sellers initially need to overcome a tough support area from 56.30 to 55.66 – consisting of the 50- and 100-period SMAs, lower bound and the cloud – before dropping towards the trendline and nearby 200-period SMA currently around the 55.00 and 54.72 levels respectively.

In brief, the short-term bias is neutral-to-positive. Yet, a break either above 57.83 or below 55.66 would be needed to set the direction. 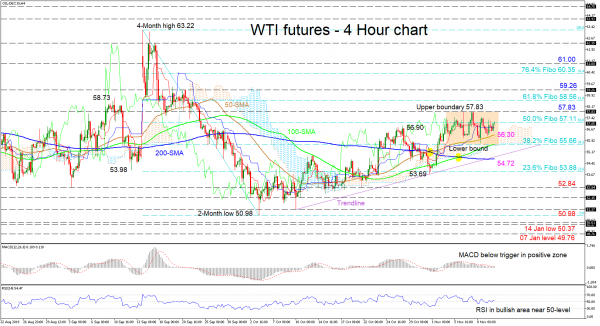