Copper with delivery in March 2020 is looking strongly bearish in the short-term after plunging below the eight-month high of 2.8825 on January 16.

Prices hit a four-month low of 2.5115 and the technical indicators are all pointing to further negative momentum in the near term. The RSI is also in an oversold territory below 30 and is clearly pointing down, while the MACD is strengthening its bearish view below trigger and zero lines. Moreover, the 20- and 40-simple moving averages (SMAs) recorded a bearish crossover, confirming the significant sell-off.

Immediate support to further losses would likely come from the 2.4780 support, idientified by the bottom on September 2019. If there is a successful break below this area could see a pause at the 2.4000 psychological level.

If, however, the strong selling interest was to lose steam and the pair reverses higher, resistance could be initially come from the 2.6180 barrier. Even higher, the 100-day SMA could attract traders’ attention near 2.6867. More upside moves could send the commodity until the 2.7555 resistance, which overlaps with the 20-SMA.

All in all, Copper is in negative mode in the very short-term timeframe and neutral in the bigger picture. 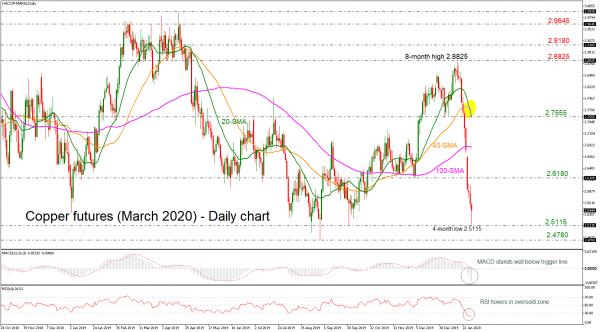