The US 500 index (cash) has been printing a series of lower lows and lower highs since the start of September in the four-hour chart, reaching a two-month low of 3,209 last week.

Although the index has secured a negative monthly close for the first time in five months, it could push for some recovery in the near-term given the improvement in the MACD and the RSI, which have both bottomed twice near their recent lows before bouncing up. The price also managed to overcome its 20- and 50-period simple moving averages (SMAs) giving another green light to the bulls.

The 100-period SMA is currently in target around 3,350. Should it give way, the door would open for the 3,373-3,400 restrictive region, where any violation could limit downside risks and shift the focus towards the 3,428 peak registered on September 16.

Alternatively, a decisive close below the 50-period SMA currently at 3,309 could see the retest of the 20-period SMA at 3,270. If the latter proves easy to overcome, the sell-off may pick up steam towards the key 3,227-3,209 support region. Another step lower at this point could attract new sellers, worsening the negative outlook in the short-term. Such a move would also sound a warning bell for the six-month old upward pattern.

Summarizing, the US 500 index is expected to recoup some losses in the short run, likely finding an obstacle around 3,350. A pullback below its shorter-term SMAs could bring the bears into play, while a cross under the 3,209 floor would raise concerns among medium-term traders too. 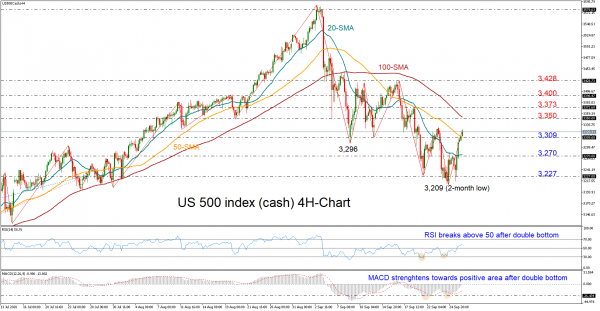 US: September Marks Another Solid Month for Housing Starts

US Equities Slip Over Stimulus Deadline