Rallies in Yen and Swiss Franc accelerate while selloffs in commodity currencies intensify on US-China trade war today. Trump “stepped up” his pressure on China and warned the latter not to retaliate. But it’s actually unsure who he was talking to as it’s a known that Twitter is blocked in the locked-up China.

Even China’s internet space is open, Xi is not known to be a social-media addict. Even if Xi is secretly a social media enthusiast, Weibo or Wechat are the ways to go rather than Twitter. So, unsurprisingly, China didn’t listen to the threat tweets that Trump directed to somebody else, and announced retaliation to US, effective Jun 1.

In the currency markets, Australian Dollar is leading other commodity currencies down on risk aversion. Yen is the strongest one for today so far, followed by Swiss Franc. Selloff in Chines Yuan remains in acceleration phase as USD/CHN breaks 6.9. Key psychological level at 7.0 should be within reach shortly.

Technically, USD/JPY’s fall quickly resumes through 109.47 temporary low. It’s heading towards 104.69 key support. GBP/JPY is likely resuming recently decline too and breaches 142.22. EUR/JPY might soon have a take on 122.48 temporary low. EUR/AUD breaks 1.6122 key resistance and could be heading back towards 1.6765 high. AUD/USD is still pressing 0.6962 temporary low and is vulnerable.

China official announced retaliation to US tariffs hikes from 10% to 25% on USD 200B in Chinese import effective on May 9.

In a statement of the Office of the Customs Tariff Commission of the State Council, China criticized that the above move by the US “led to an escalation of economic and trade frictions, which violates the consensus of China and US to resolve trade differences through consultations”. And, that “harms the interests of both sides and does not meet the general expectations of the international community.”

The Commission announced to “adjust” and raise current tariffs on US imports, effect June 1. For the list of USD 60B tariffs US products, rate will be raised to 25%, 20% or 10%. For those products at 5% tariffs, the rate will be maintained.

Trump: Nobody left in China to do business with. That’s very bad for China, very good for USA

Trump continues to “demonstrate” his verbal threats to China with his tweets. He claimed that of the 25% tariffs, only “4 points were paid by the US”. “21 points” will be paid by China because it “subsidizes product to such a large degree”. And, people can by products “inside the USA”. Tariffs companies will be “leaving China for Vietnam and other such countries in Asia.

He also claimed that “there will be nobody left in China to do business with” and that’s “very bad for China, very good for USA”. He warned that “China should not retaliate – will only get worse!”. Also, Trump told Chinese President Xi “you had a great deal, almost completed & you backed out”.

US Perdue to Japan: We’re aware of your July election, but Trump expects you to treat us a premier customers in trade

On trade negotiation with Japan, US Secretary of Agriculture Sonny Perdue warned that “we cannot continue to kick this trade can down the road forever.” While a quick deal might be difficult, he said Trump is is really looking forward to a deal sooner rather than later”.

Meanwhile, Perdue also said they’re “very much aware of the elections of the upper body”, in July in Japan. But he added, Trump is “expecting again Japan would treat us as their premier customer as we are.”

EU Malmström: US could extend May 18 deadline for auto tariffs decision

EU Trade Commissioner Cecilia Malmström told newspaper Süddeutsche Zeitung that the deadline regarding US decision on auto tariffs on EU could be extended.

She recalled that “as long as we are in negotiations, no new tariffs will be imposed and we hope the US President will stick to them”. Also, while the deadline for car tariffs decision in May 18, “the deadline can be extended… because of the negotiations between the US and China.”

Though, Malmström reiterated the EU is prepared for any consequences. She pointed to the case of “Boeing and Airbus”. She said, “we are prepared for the worst”, and the retaliation list to US is ready.

According Bank of France business survey results, the economy could be expanding by 0.3% in Q2. The survey noted that:

BoE Broadbent: A Brexit deal would lead to quite a strong bounce-back in investment

BoE Deputy Governor Ben Broadbent warned that further Brexit delays beyond October 31. risks greater damage to the economy. He said “it’s pretty clear that investment has been feeling the consequences of the uncertainty about Brexit and particularly the possibility of a bad outcome”.

He warned, “if you continually expect news to arrive imminently – a resolution – then that can have quite a depressing effect on investment”. And, persistent depression on investment is clearly bad for the economy as “we rely on investment for making us collectively more productive and better off.

The deterioration in economic situation raised the chance that Japan is already heading to a recession. US-China trade conflict has been a clear drag to the export-led economy. With current escalation in tensions, Japan could start to feel heavier impact ahead.

USD/JPY’s fall resumes after brief consolidation and intraday bias is back on the downside. Firm break of 109.71 confirmed completion of rebound from 104.69, on bearish divergence condition in daily MACD. Deeper decline should now be seen back to retest 104.69 low. On the downside, break of 110.04 minor resistance will turn intraday bias neutral and bring consolidations, before staging another decline. 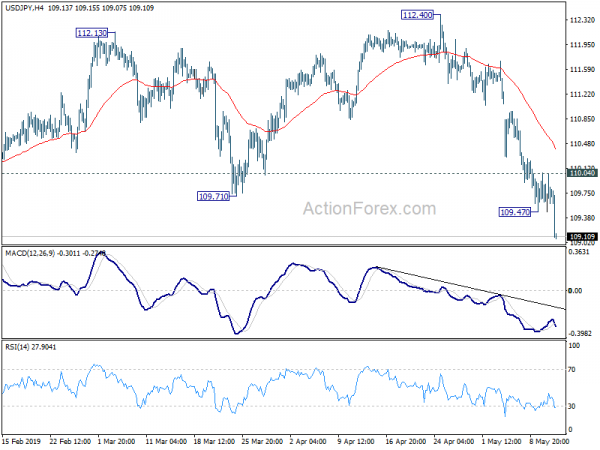 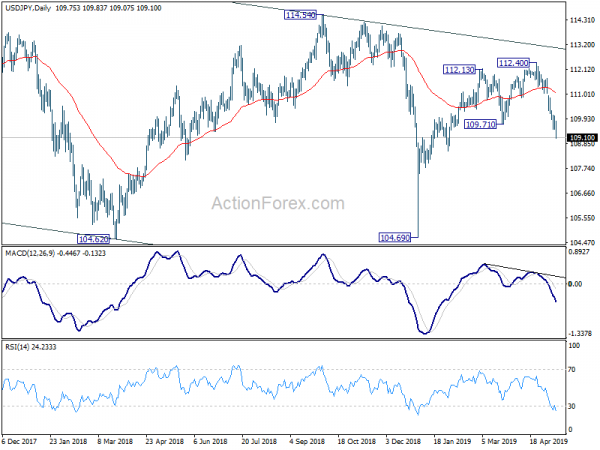