Chinese Yuan weakens further against the Dollar today and tensions heighten over the situations in Hong Kong. The new national security law on Hong Kong is expected to be passed on May 28, by passing the city’s own legislature, by the rubber-stamp Congress of China. It’s widely seen as a move that violates the “one country, two systems” principle that jeopardize the city’s global status.

Ahead of that, US President Donald Trump indicated some “very powerful” measures in response to China’s move regarding Hong Kong. He told reporters yesterday, “we’re doing something now. I think you’ll find it very interesting. But I won’t be talking about it today… It’s something you’re going to be hearing about over the next — before the end of the week.. Very powerfully, I think.”

The measures by the Trump could involve triggering the Hong Kong Human Rights and Democracy Act, passed last year, to sanction some Chinese and Hong Kong officials, as well as businesses. More important, the US could suspending Hong Kong’s special trade status.

At the same time, protests are going on in Hong Kong today against the new national anthem bill. The Hong Kong Bar Association warned that parts of the bill “deviate from the good traditions” of Hong Kong’s common law system”. It’s seen by some legal experts that the laws looked like they’re written in Beijing, for implementing Chinese styles rules.

USD/CNH’s breaks 7.1649 resistance today and hits as high as 7.1759 so far. While further rise cannot be ruled out, technically, we’d still expect strong resistance from 7.1953 high to limit upside. Break of 7.0963 support should indicate short term topping, and bring deeper fall to extend the consolidation pattern from 7.1953. However, sustained break of 7.1953 would firstly resume medium term up trend. More importantly, that would be a strong signal of further deterioration in US-China tensions. 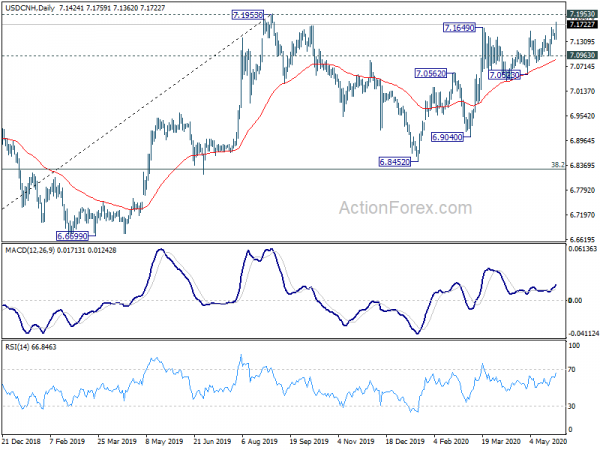