The RBA minutes for the October meeting reinforced its cautious stance on the monetary policy. With the cash rate unchanged at 1.5% for 24 consecutive months, the members have seen no urgency to make adjustment. While affirming the next move would more likely a rise than a fall, there is no sign of action any time soon. This is hinged on low wage growth and subdue inflation, despite strong economic growth and better job market conditions. The minutes revealed that the RBA remained content with AUD depreciation, but is getting more concerned about the tighter lending conditions.

Yield spread widening and escalations of US-China trade war have been the key causes of AUD weakness. Fed’s monetary policy normalization process since 2015 has resulted in 8 rate hikes so far. The three rate hikes (25 bps each) in both 2017 and in the first nine months of this year have brought the Fed funds rate to 2-2.25%. On the other hand, RBA, after several times of rate hikes in 2009-2010, resumed easing before leaving its policy rate at historical low of 1.5% since August 2016. The divergence in monetary policy has caused US yields to surpass Australia’s early this year, leading capitals to flow out of the latter for the former. Meanwhile, the US-China trade war has huge impact on Australia, which exports much of its raw materials to China. Since Trump’s first tariff on Chinese goods took effect in July, Australian dollar has dropped more than 3% against US dollar. Yet, the members appeared satisfied with the movement, noting that the “modest depreciation of the Australian dollar was likely to have been helpful for domestic economic growth”. 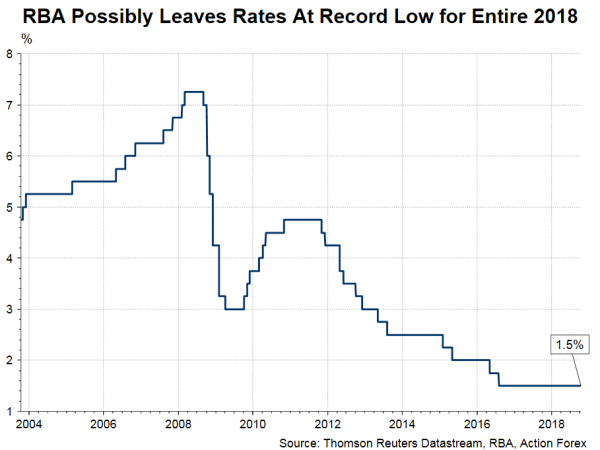 Policymakers are closely watching the impact of the tighter market condition, brought about by the Royal Commission, on the economy. As noted in the minutes, “members observed that while the regulators had already overseen a tightening of lending standards, and a degree of tightening of lending standards had been implemented by banks in anticipation of the commission’s findings, it was possible that banks could tighten lending conditions further given the issues raised in the report”. It added that the central bank would “monitor the future supply of credit to ensure that economic activity continued to be appropriately supported”.

Market Morning Briefing: Pound Has Risen To Trade Above 1.20 Now