Euro Dives after ECB Announces to End QE this Year, But Interest Rates Will Stay Unchanged At least Through 2019 Summer

Euro drops sharply today as markets are not quite happy with ECB announcement. In particular, while deciding to end the asset purchase program this year, ECB said interest rate will remain at current level at least through 2019 summer. President Mario Draghi also sounds cautious as usual in the post-meeting press conference. Adding to that, 2018 GDP growth forecast was revised notably lower. Though, a positive point is that inflation projections are revised notably higher too. On the other hand, Dollar is lifted by stellar retail sales report and solid as usual jobless claims report. Sterling was lifted briefly earlier today by strong retail sales data. But the Pound was dragged down by Euro in early US session.

Technically, EUR/USD’s break of 1.1713 should now indicate completion of recent rebound from 1.1509. Retest of this low would be seen shortly. USD/CHF’s rebound also put 0.9911 resistance into focus. Firm break of which will confirm completion of corrective pull back from 1.0056.

ECB to taper APP to EUR 15B/M after September, end it after December

The current EUR 30B per month asset purchase program will continue to run as planned till the end of September. Then, the monthly size will be tapered to EUR 15B, subject to incoming data. The program will then run till the end of December 2018 and end there. ECB said the decisions “maintain the current ample degree of monetary accommodation that will ensure the continued sustained convergence of inflation towards levels that are below, but close to, 2% over the medium term.”

Euro drops sharply as markets are not too happy with ECB’s “judgement”. The decision to taper, instead of ending it right after September could be a factor. The more important one could be this part of the statement. “The Governing Council expects the key ECB interest rates to remain at their present levels at least through the summer of 2019 and in any case for as long as necessary to ensure that the evolution of inflation remains aligned with the current expectations of a sustained adjustment path.”

Main focus in the US session will now be on Trump’s decision regarding tariffs on USD 50B of 1300 lines of Chinese imports. that’s the action under section 301 investigation in response to forced transfer of U.S. technology and intellectual property. It’s different from the section 232 steel and aluminum tariffs against the world. The section 301 tariffs solely targeted at China. Trump will meet with his trade advisors to make a decision. The final list of tariffed products could be unveiled as soon as tomorrow.

Chinese Foreign Ministry spokesman Geng Shuang said today that there were progress in the trade talks with the US. But he warned that those agreements reached will be voided if Trump decides to go on with the tariffs. He also emphasized that that “The essence of China-U.S. trade and business ties is cooperation and win-win. We have consistently upheld that both sides should appropriately resolve relevant trade and business problems … via dialogue and consultations,”

In the release, ONS noted that “feedback from retailers suggested that a sustained period of good weather and Royal Wedding celebrations encouraged spending in food and household goods stores in May.” And, the sharp 3.9% yoy rise in headline years was “possibly due to a combination of warm weather and slow year-on-year growth in May 2017 at 0.8%.”

Also from UK, RICS house price balance improved to -3 in May.

Australian Dollar is pressured by its own data miss as well as weaker than expected China data today. Australia employment rose 12k seasonally adjusted in May, below consensus of 19.2k. Unemployment rate dropped to 5.4%, as participation rate also dropped to 65.5%. 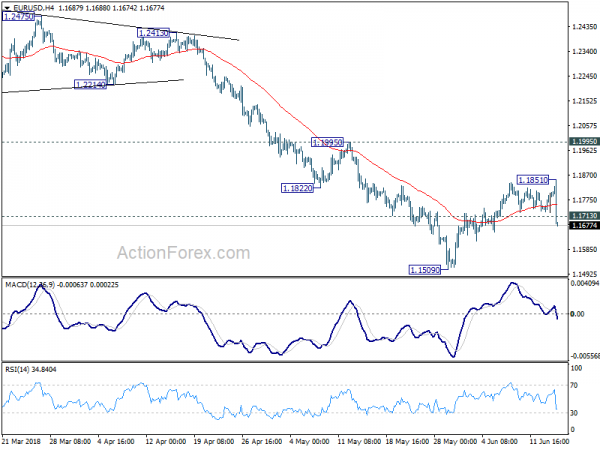 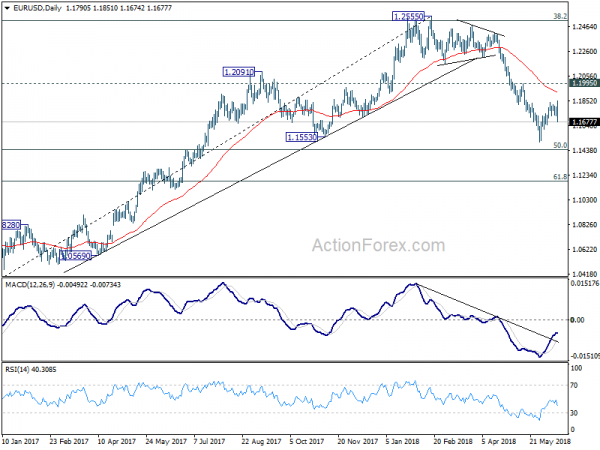