The financial markets are rocked by Trump’s over-the-top escalation in trade spat with China. At the time of writing, FTSE is down -0.4%, DAX down -1.2% and CAC down -1.1%. Dow opens by dropping more than -300%. In the currency markets, Yen and Swiss Franc are the strongest ones on risk aversion together with Dollar. Meanwhile, Australian Dollar is worst hit for its close ties with both the US and China. New Zealand and Euro follow as the second and third weakest.

Technically, GBP/USD’s break of 1.3203 support confirms resumption of down trend form 1.4376. EUR/CHF’s break of 1.1505 minor support also indicates completion of recent rebound from 1.1366. If looks like it’s just a matter of time for EUR/USD to break through 1.1509 low to resume larger decline.

Trade war will definitely happen, and could spiral out of tariffs

As stated in an USTR statement released yesterday, Trump ordered Trade Representative Robert Lighthizer to identify USD 200B of Chinese products for additional 10% tariffs, in response to China’s retaliation on Section 301 tariffs. The Chinese Ministry of Commerce responded by vowing to fight US blackmail that deviates from the consensus reached during the trade talks in the past few months.

Today’s sharp decline is stocks showed that investors are finally waking up to the risks of further escalation. We’ve pointed out before that Trump has no intention to negotiate. When he wants to talk, he can unconditionally stop military exercise with South Korean for “negotiating in good faith”. When he didn’t want to discuss, he scheduled to leave G7 summit early, and used Canadian Prime Minister Justin Trudeau as the scapegoat to overturn the agreement to the communique of the whole group. It’s clear that all the meeting between Chinese and US trade officials were time-wasting as the Trump’s willingness to negotiation is just a lie.

Trump is not even going to listen to his own fellow Americans. The Farmers for Free Trade group is going to launch a tv ads against trade war. Agriculture associations has launched a #TradeNotTariffs campaign. The US Chambers of commerce have criticized that “imposing tariffs places the cost of China’s unfair trade practices squarely on the shoulders of American consumers, manufacturers, farmers, and ranchers. This is not the right approach.” These voices have fallen into Trump’s ignoring deaf ears.

For now, the reactions in the markets showed investors are thinking beyond tit-for-tat tariffs. The stakes that Trump raised already exceed total amount of US imports to China. China would have to turn to non-tariff measures to counter US bullying. The impact of that could be even more destructive to the economies of both country.

In interview, China’s PBoC Governor Yi Gang said recent stock market volatility is emotion-driven and urged investors to stay calm. He referred to the -3.78% decline in the Shanghai Composite today. Yi added that resilience of the Chinese economy has increased. Additionally, as domestic demand picked up, China’s reliance on international trade has dropped from 64% in 2006 to 33% last year. That’s even lower than the world’s average of 42. Current account surplus’ contribution to GDP also dropped from 10% in 2007 to 1.3% last year. He noted that the “economic endogenous potential is huge and there are sufficient conditions and space to deal with various trade frictions.”

Earlier today, the PBoC injected CNY 200B liquidity into the markets through its medium-term lending facility (MLF). PBoC said the cash injection was to  “make up for mid- to long-term liquidity gap in the banking system”. But it’s seen by analyst as part of the package of measures safeguard the economy, in preparation for further escalation in trade conflict with the US. In addition to that, it’s believed China would also quicken the boost in domestic demand through fiscal polices like tax cuts and spending.

Even after the downward revision in growth projection, Ifo noted that downward risks have “increased significantly”. In particular, it singled out the US as external risk. It pointed out “in June 2018 the USA introduced tariffs of 25% on steel and 10% on aluminium imports from Canada, Mexico and the European Union. Although the long-term effects of these tariffs are relatively weak, the USA is currently considering whether it should introduce a tariff on imported cars too. Overall, this would lead to considerably higher GDP losses. At the same time, the EU and China have announced retaliatory tariffs, meaning that the introduction of further trade barriers is no longer a negligible risk.”

In addition, Ifo pointed to US triggered supply side driving oil price surge as another risk. It noted, “the increase in oil prices up until the beginning of this year were largely demand-side driven. Since then friction between the USA and Iran have promoted a supply-side in-crease in oil prices, which is likely to have a dampening impact on the world economy. If the pressure from the US government on the EU were to become so great that the EU revoked the nuclear agreement, oil prices would continue to rise and curb growth in world production.”

ECB President Mario Draghi delivers his speech on “Monetary policy in the euro area” at the ECB Forum on Central Banking today.

He opened by saying that “the euro area’s economy continues on a growth path and inflation is gradually returning towards our objective.” But recent data created “questions about the durability of the growth outlook”. And, the financial crisis presented policy makers with “new issues and fresh challenges in understanding the wage- and price-setting process.” For now, “ample degree of monetary accommodation” will help lifting inflation towards target. And that will be “maintained even after a gradual winding-down of our net asset purchases.” Draghi emphasized that “this requires monetary policy in the euro area to remain patient, persistent and prudent.”

Draghi reiterated the decisions made last week on ending the asset purchase program in December, reinvesting the principle payments afterwards, and, keep interest rates unchanged through the summer of 2019. He added that “this enhanced forward guidance clearly signals that we will remain patient in determining the timing of the first rate rise and will take a gradual approach to adjusting policy thereafter.

RBA unsure next move is a hike?

A major surprise from the RBA minutes released today is that it no longer predicts the next rate move as a increase. Back in the April and May meeting minutes, the central bank noted that “in the current circumstances, members agreed that it was more likely that the next move in the cash rate would be up, rather than down.” But such reference is taken out from the June minutes.

While that’s a notable change, it shouldn’t be taken too seriously for the time being. The minutes were on the meeting held on June 5. On June 13, last Wednesday, RBA Governor Philip Lowe reiterated in a speech that “the national accounts provided confirmation that the Australian economy is moving in the right direction … If this continues to be the case, it is likely that the next move in interest rates will be up, not down.”

Otherwise, the minutes revealed nothing special. The main factor behind RBA’s neutral stance is sluggish wage growth. It reiterated that the unemployment rate steadied at 5.5%. Ratio of job vacancies to the number of unemployed workers had remained well below levels seen a decade earlier. Both suggested that “spare capacity remained in the labour market.” And, “wages had continued to grow at a low and stable rate”.

Also from Australia, House Price index dropped -0.7% in Q1 versus expectation of -0.9%.

GBP/USD’s decline resumed after brief consolidation. Break of 1.3203 low confirms resumption of whole fall from 1.4376. Intraday bias is back on the downside. Sustained break of 50% retracement of 1.1946 to 1.4376 at 1.3161 will pave the way to 61.8% retracement at 1.2875 next. On the upside, break of 1.3471 resistance is now needed to indicate short term bottoming. Otherwise, outlook will remain bearish in case of recovery. 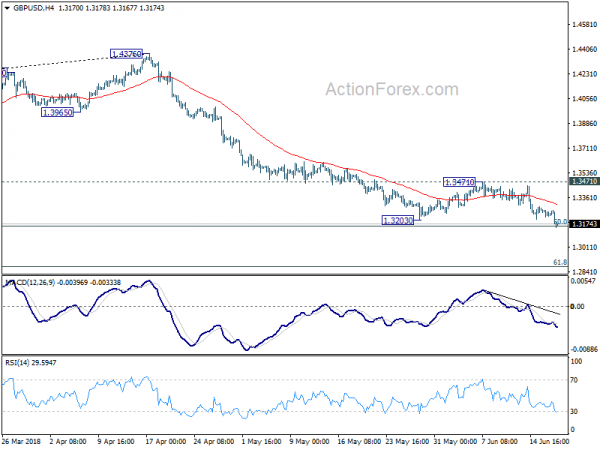 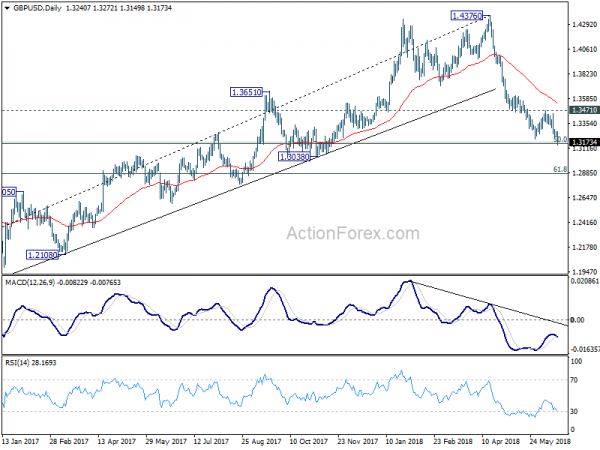