Dollar ignores mixed economic data and surges broadly, except versus Canadian in early US session. Sentiments are generally lifted by news that Trump is backing down again on his tough stance on curbing Chinese investments, after backfires from businesses and Republicans. The mixed messages from White Houses are also re-aligned as the measures will not single out China as the target. DOW futures dropped to as low as 24079 earlier today but is now flat. There is room for rebound in US stocks today, in particular in NASDAQ.

In the currency markets, New Zealand Dollar remains the weakest one for today and for the week. Markets will look into RBNZ statement in the upcoming Asian session. And there is risk of RBNZ sounding more cautious on the economic outlook. Sterling follows as the second weakest for today. But Australian Dollar is the second weakest for the week. Canadian Dollar is supported by rally in WTI oil, which breaks above 71 handle. But it’s actually not much stronger than Dollar as USD/CAD is staying in very tight range.

The markets are responding positive to news that Trump is backing away from the rumored harsh measure on curbing Chinese investments in US technology companies. Instead, his administration will revert to existing laws, with an upgrade. Trump himself told reports that “it’s not just Chinese”. Treasury Secretary Steven Mnuchin also said that “we are not singling out China, but we will protect technology transfer to China as we will to other important areas.” Mnuchin also pledged that “we will have the necessary tools to protect investments, whether it’s China or anybody else.”

The administration will relay on the newly strengthened Committee on Foreign Investment in the United States (CFIUS) to deal with the issue. The legislation to be used is called the Foreign Investment Risk Review Modernization Act. Trump said the upgraded CFIUS “will enhance our ability to protect the United States from new and evolving threats posed by foreign investment while also sustaining the strong, open investment environment to which our country is committed and which benefits our economy and our people.” And, “I have concluded that such legislation will provide additional tools to combat the predatory investment practices that threaten our critical technology leadership, national security, and future economic prosperity.”

Trump originally considered invoking executive authority to impose and much tougher crackdown on Chinese investments. And there have been conflicting messages from White House trade adviser Peter Navarro and Mnuchin. But such an idea appeared to have drawn severe complaints from US businesses and Republicans, on the potential economic fallout.

The Bank of England published the latest Financial Stability Report today. In the opening remarks of the press conference, BoE Governor Mark Carney warned that “events of the past few months are a reminder that many of the most important risks to financial stability in the United Kingdom originate beyond our shores.”

The risks include “recent tightening in global financial conditions” that could be a “‘precursor to a much more substantial snapback in world interest rates”. There could be “more challenging bank, corporate and sovereign funding conditions.” Besides, “Rising protectionist sentiment could sap some of the current strength of the global economy and reduce the size of sustainable external imbalances.” In addition, “the complete set of mitigants to the risks of a cliff-edge Brexit also rely on the efforts of EU authorities”. Lastly, “cyber risks to UK financial services could originate from anywhere on the planet.”

UK Hammond to China: We’re a firm supporter of trade liberalization and your long-term trusted partner

UK Chancellor of Exchequer Philip Hammond wrote in an article in China’s financial magazine Caixin, saying the the globalized UK is China’s long term partner. Hammond is visiting Beijing this week and he pledges to “convey a message to the outside world – as a firm supporter of trade liberalization and a free market, the United Kingdom is China’s long-term trusted partner.”

Also, he wrote “Britain is committed to promoting free and open trade, and as Britain and its European cooperation partners form a new relationship, we will deepen our relations with other regions around the world.” And, there was “enormous development space” with cooperation with Chinese financial services businesses. Hammond also hailed that UK is an “ideal cooperation partner” to the Belt and Road initiative, and they would likely to ” grasp the unlimited opportunities” and “take a lead in its financing work.”

ECB: Impacts of exchange rate on inflation are spread out over several quarters

ECB published an article today titled Monitoring the exchange rate pass-through to inflation. There it noted that exchange rate developments can play an “important role” in shaping the HICP inflation outlook, through “both direct and indirect channels”. The impacts are “spread out over several quarters”. And, the effect could be difficult to detect if it is “offset by a confluence of other factors”. Among the components, “energy and food, non-energy industrial goods” are most sensitive to exchange rate movements.

As the background, Euro appreciated by about 8% in nominal effective terms and by about 10% against the US dollar, between April 2017 and May 2018. The impact of past euro exchange rate appreciation has been clearly visible in import price developments. The report pointed to import prices for non-food consumer goods, which dropped to 2.0% in April 2018, down from 1.3% in 2017. Over the same period, extra-euro area import price inflation for industry (excluding energy and construction), which also affect prices earlier in the domestic production chain, decreased from 3.1% to ‑1.7%.

Producer price inflation, on the other hand, has remained resilient to downward pressure from the exchange rate appreciation. PPI for intermediate goods declined only moderately during the period. PPI of non-food consumer goods increased from 0.2% in April 2017 to 0.5% in April 2018.

Indirectly, euro exchange range can affect domestic price pressure through company profits, “albeit with a somewhat ambiguous overall sign.” The
non-energy industrial goods inflation does not provide a clear sign for significant effects of the exchange rate appreciation.

New Zealand ANZ Business Confidence deteriorated again in June and dropped to -39.0, down from -27.2. The Own Activity index also dropped from 14 to 9. ANZ noted in the release that the GDP growth growth indicator remained expansionary but “the economy may continue gently losing steam over coming months, despite the support coming from fiscal stimulus and high commodity prices.” And, “tailwinds in the form of fiscal stimulus and strong terms of trade will see the economy continue to grow at about par. However, cost, credit and capacity headwinds have strengthened, and firms have noticed.”

New Zealand Dollar is under broad based selling pressure today as markets await RBNZ rate decision. RBNZ will keep the OCR unchanged at 1.75%, no doubt. It will also reiterate the neutral stance to “keep the OCR at this expansionary level for a considerable period of time” too. The main question is how RBNZ Governor Adrian Orr view the balance of risks. On the one hand, there will be stimulus from the government’s expansive fiscal policy. But on the other hand, there is threat of global trade war and slow down in China, it’s major trading partner. 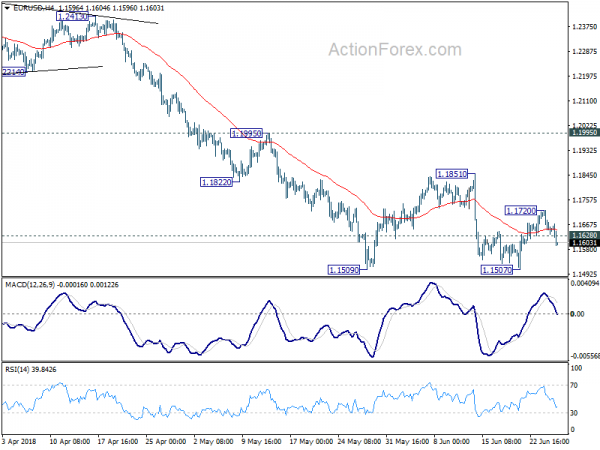 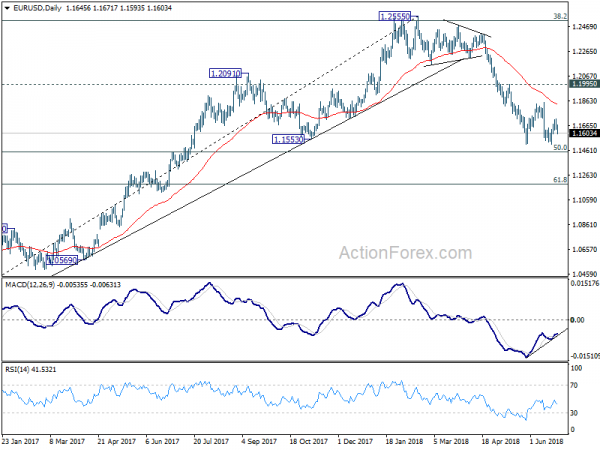 US Dollar Eases In Asia

Eurozone Sentix investor confidence rose to -18.2, but upswing could run out of steam in summer