Euro surges broadly today as traders cheer the agreement by EU leaders on migration. Australian Dollar follows as the second strongest as Chinese stocks lead a strong rebound in Asian equities. At the time of writing the Shanghai composite is up 1.2%, Hong Kong HSI is up 1.15% while Singapore Strait Times is up 0.7%. With that, Yen is sold off broadly and is trading as the weakest for today so far. Dollar follow as the second weakest. In other markets, Spot Gold dipped to as low as 1246.11 but regains 1250, follow Dollar’s pull back. WTI crude oil stays strong and extends this week’s rally to as high as 73.42.

For the week, Canadian Dollar remains the strongest one, followed by the greenback. But the positions could change before close with the number of key events scheduled, including Eurozone CPI, US PCE and Canada GDP. New Zealand Dollar remains the weakest one and there is little hope on a come back.

Technically, USD/CAD’s pull back accelerated on oil and an repricing of BoC July hike odds. Deeper fall could be seen today in case of upside surprise in Canadian GDP. But we’d not expect a break of 1.3067 support. EUR/USD is staying in range above 1.1507. While further rebound could be seen, we don’t expect a break of 1.1851 resistance. And, as EUR/GBP’s rally continues, we’d expect Sterling to stay pressured broadly.

Euro jumps broadly today on news that the 28 EU leaders have agreed on the conclusions of the EU summit, including migration. There were some concerns earlier as Italy threatened to block all agreement if they requests on migration were not met. German Chancellor Angela Merkel, who’s under political pressure domestically, said that “overall, after an intensive discussion on the most challenging theme for the European Union, namely migration, it is a good signal that we agreed a common text.”

In short, on migration, European Council pledged to reinforce polices that ” prevent a return to the uncontrolled flows of 2015″ in immigrants. And it will further “stem illegal migration on all existing and emerging routes.” EU also pledged to “stand by” Italy and other Central Mediterranean nations, “step up its support for the Sahel region, the Libyan Coastguard, coastal and Southern communities, humane reception conditions, voluntary humanitarian returns, cooperation with other countries of origin and transit, as well as voluntary resettlement

EU pledged to guard against all protectionist actions

Regarding trade tension with the US, EU leaders reiterated that the US steel and aluminium tariffs “cannot be justified on the grounds of national security”. And European Council ” fully supports the rebalancing measures, potential safeguard measures to protect our own markets, and the legal proceedings at the WTO, as decided on the initiative of the Commission”. EU also pledged to “respond to all actions of a clear protectionist nature”.

European Council also “underlines the importance of preserving and deepening the rules-based multilateral system.” And it invites the European Commission to “propose a comprehensive approach to improving, together with like-minded partners, the functioning of the WTO in crucial areas such as (i) more flexible negotiations, (ii) new rules that address current challenges, including in the field of industrial subsidies, intellectual property and forced technology transfers, (iii) reduction of trade costs, (iv) a new approach to development, (v) more effective and transparent dispute settlement, including the Appellate Body, with a view to ensuring a level playing field, and (vi) strengthening the WTO as an institution, including in its transparency and surveillance function.”

While quarter end position adjustment could be a factor, a main trigger for the rebound in Asian stocks is the shift in the policy stance of China’s central bank PBoC. With that, the process of deleveraging could be slowed to ensure sufficient liquidity in the markets.

In the statement released after Q2 regular meeting, PBoC noted challenges and uncertainties in international developments. And it emphasized the need in “anticipation and forward-looking pre-adjustment fine-tuning” on monetary policy. While being neutral, monetary policy has to “maintain adequate liquidity, and guide the reasonable scale of monetary credit and social financing.”

Also, PBoC noted the need to use a variety of tools to “grasp the strength and rhythm of structural deleveraging”. The aims were to promote “promote stable and healthy economic development, stabilize market expectations, and guard against systemic financial risks.”

St. Louis Fed President James Bullard said he’s “hearing full-throated angst” regarding escalating trade disputes across his district. He added that “all aspects of the economy are affected, but agriculture is certainly” being hit.

He pointed to some suppliers using threat of new tariffs to raise prices, even though their businesses are not directly targeted. And to Bullard, “that shows you how uncertainty over trade policy can feed back” into business decision-making.”

Minneapolis Fed President Neel Kashkari said he’s “comfortable” with interest rate moving back to a “neutral rate”. That is, a level that’s “not stimulating the economy, but not also constraining the economy”. After that, Kashkari would prefer to ” just wait and see how inflation evolves.” And, Fed could the observe whether wage growth, inflation data support moving to a contractionary policy. But so far, according to Kashkari, the data “does not” support moving into contractionary policy.

A question that Fed policymakers are facing the the lack on acceleration in inflation even though unemployment rate dropped to as low as 3.8% last month. It’s commonly believed that inflation would surge to pull unemployment rate back up to the natural rate level. Kashkari pointed out that “in a recession, economists tend to raise the natural rate of unemployment”. However, during recovery, we’re so reluctant to then lower it, and we end up being late lowering it in recovery.” Nonetheless, Kashkari said he’s not ready to believe that natural unemployment rate to be as low as 3.5% as that’s a big departure from historical data.

BoE Haldane: The vote for hike last week was hardly either surprising or radical

BoE chief economist Andy Haldane said yesterday that his vote for rate hike last week was “hardly either surprising or radical”. He pointed out it was a “a full decade after monetary policy was first placed on an emergency setting”. Even with a 25bps hike in the Bank Rate to 0.75%, monetary conditions in the UK would remain ” extraordinarily accommodative by any historical metric”. And the aim for a hike was to “lower the risk of needing to tighten policy less gradually in future and cause a sharper adjustment in the economy.” He also noted he would even have voted for a hike back in May “had data on the economy held firm”.

On the economy, he said “data on the consumer since the May MPC meeting has, virtually without exception, bounced back strongly”. And that includes “measures of retail spending, consumer confidence and consumer credit”. The underlying picture now appears to be one of “gently rising household spending”. This is being supported by highly accommodative credit conditions and “now-positive growth in inflation-adjusted wages”.

Looking ahead, it’s a pretty busy day. Swiss KOF, German unemployment, UK mortgage approvals, current account and Q1 GDP final will be featured in European session. But main focus is Eurozone CPI, which is expected to finally meet ECB target of 2% in June.

Later in the day, US will release personal income and spending, PCE inflation, Chicago PMI. Canada will release GDP, IPPI and RMPI, as well as BoC business outlook survey. 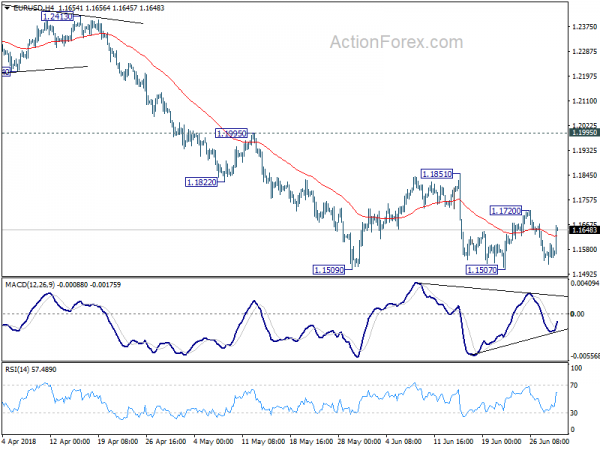 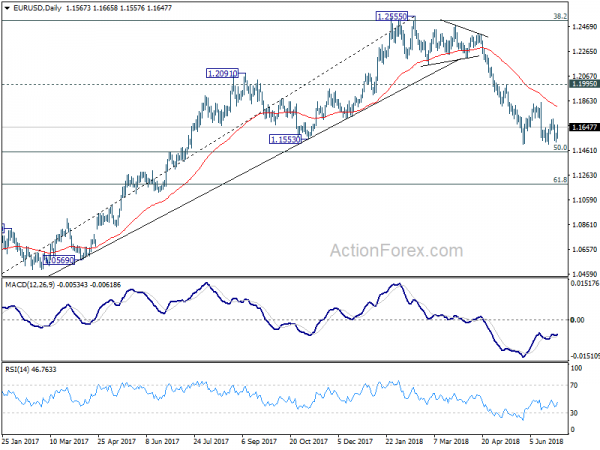 EUR/USD Bounces Off Lower End Of The Range