Dollar Broadly in Red ahead of Holiday, Risk Aversion Continues

Investor sentiments remain generally pessimistic. US stocks attempted for rebound in shortened session overnight but failed. DOW ended losing -132.36 pts or -0.54%. S&P 500 dropped -0.49% while NASDAQ declined -0.86%. Safe haven flows limited treasuries with 10 year yield dropped -0.028 to 2.838. Selloff continues in Asia with Nikkei down -0.22% at the time of writing. China’s Shanghai SSE composite is down -0.44% while Hong Kong HSI is down -0.79%. Singapore Strait Times, though, is flat. In the currency markets, however, Australia Dollar and New Zealand Dollar trade mildly higher today, digesting recent losses. That’s followed by Yen as the strongest for today. Dollar is trading broadly in red and that help Gold’s recovery, which breaches 1260 handle.

Technically, EUR/USD and GBP/USD are bounded in familiar range as consolidation continues. Both are staying near term bearish. USD/JPY’s break of 110.55 minor support suggests near term reversal and it’s probably heading back to 109.36 support. AUD/USD’s break of 0.7408 minor resistance also suggest short term bottoming after defending 0.7328 key support. There is prospect of a stronger rebound in near term. USD/CAD dipped through 1.3128 to extend the correction from 1.3385. For now, we’d still expect downside to be contained by 1.3067 support to bring rebound.

Reuters reported, according to unnamed source, that the US faced strong objections from over 40 countries over its possible auto tariffs at the WTO Council on Trade in Goods. Japan and Russia initiated the discussions and warned such measures could lead to collapse of the rules-based multilateral trading system.

The US representative avoided to give a direct response and said the topic was already a subject of formal disputes at the WTO. Therefore, it shouldn’t be on the committee’s agenda.

ECB chief economist Peter Praet said in a speech yesterday that “progress towards a sustained adjustment in inflation has been substantial so far.” And, “the underlying strength of the euro area economy, together with well-anchored, longer-term inflation expectations, provides grounds to be confident that the sustained convergence of inflation will continue in the period ahead, even after a gradual winding-down of net asset purchases.”

He discussed the three criteria of progress assessment: convergence, confidence and resilience. As for convergence, ECB staff projections expect headline and core inflation to hit 1.7% and 1.9% respectively in 2020. This is a “pattern of convergence” to target. Uncertainty on inflation outlook “has been declining significantly” and risk of deflation “has vanished”. Inflation expectations have been “gradually improving” and domestic cost pressures are “strengthening”. These provide improving confidence. Also, the protected inflation convergence has become ” progressively less reliant on further extensions of net asset purchases”, which shows improved resilience.

Praet also reiterated that “patience, prudence and persistence” are fully reflected in our latest monetary policy decisions. ECB announced in June to taper the asset purchase to EUR 10B per month after September, and end it after December, based on incoming data. Also, interest rates will remain at present level at least through 2019 summer.

BoJ board member Yutaka Harada said in a speech that the central bank’s quantitative and qualitative monetary easing program delivered improvements to production, employment, investment, exports, and fiscal conditions. And, “further indicators are perceptions that the economy is recovering, improvements in income distribution, and women’s entry into the labor market.” He also hit back at the critics of BoJ’s policy as their arguments are “not supported by empirical evidence.”

Harada reiterated the BoJ’s stance that “it should continue with the current monetary easing with a view to achieving the price stability target of 2 percent, given that, for now, there is still room for an expansion in employment and that there are few signs of financial imbalances.”

Retail sales rose 0.4% mom in May, above expectation of 0.3% mom. Prior month’s figure was also revised up to 0.5%, from 0.4%. Ben James, Director of Quarterly Economy Wide Surveys noted in the release that “department stores (3.9 per cent) led the rises.” And, “there was also a strong result in clothing, footwear and personal accessories, which rose 2.2 per cent. Both industries were able to rebound after unusually warm weather impacted April sales.”

China Caixin PMI services rose to 53.9 in June, up from 52.9 and beat expectation of 52.7. Markit noted in the release that output expands at quicker rates at manufacturers and service provides. Staffing levels rise further at services companies, but continue to decline at goods producers. Meanwhile, there were sharper rises in input costs. The PMI composite stood at 53.0, up from 52.3, “suggesting a stable economy with a positive outlook.” 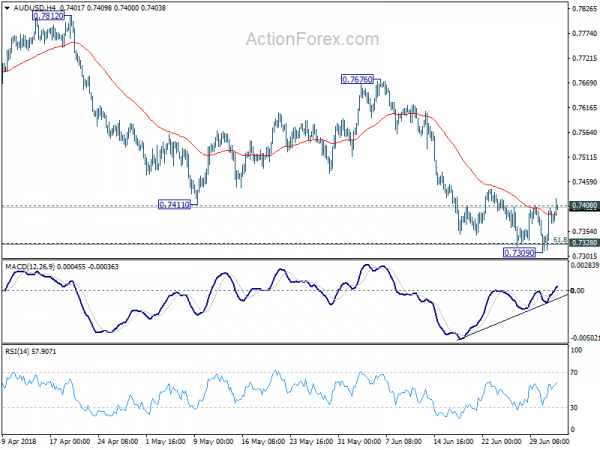 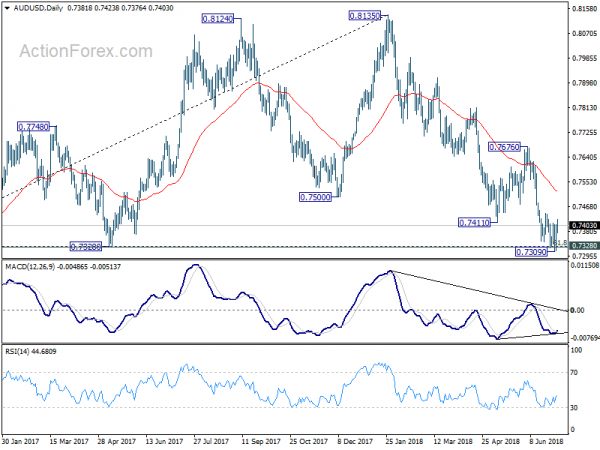