Activity in the financial markets are relatively muted today with the US on holiday. European indices are mixed in tight range with FTSE dropped -0.2%, DAX down -0.3%, CAC up 0.1% at the time of writing. In the currency markets, Sterling is lifted but a hat-trick of stronger than expected PMIs this week and is trading as the strongest one for today. But again is so far limited with even EUR/GBP holding above 0.8796 minor support. A BoE August rate hike now looks more likely than not after recent developments. Euro is trading as the weakest one for today for no apparent reason. Canadian Dollar dips mildly as WTI crude oil is back below 74 level. Gold breached 1260 earlier today but struggles to stay above this level yet.

Trade war remains the main theme as US section 301 tariffs on China and the latter’s retaliation will start looms. As a minder, the 25% tariffs will be on USD 34B in Chinese goods, and effective July 6. It’s reported that China’s 25% retaliation tariffs on USD 34B in US goods will be effective July 6 too. But due to time difference, technically speaking, China could start the tariffs ahead of the US. So, who’s July 6 was the question that catches headline today that prompted the Chinese MOFCOM to come out to pledge they will “absolutely not” fire the first shot in a trade war. This is, currently, the headline of Bloomberg.

Also regarding trade war, Reuters had an “exclusive” head line on China pressing EU for anti-US alliance on trade. We read that yesterday already but to us, this is just another nonsense reporting. Firstly, the report is all based on quotes from unnamed source. Secondly, it’s not surprising for China to lure EU to join forces. So the report is just confirming what everybody expects but without giving evidence. Also, it’s also common sense that EU won’t give a nod to China. They have repeatedly reiterated the desire to work with “like-minded” nations. That certainly don’t include China. And for EU officials, they’re not against the US but Trump and his administration only. It’s far too early to turn their back on this alliance given that Trump may or may not have another term. Such common sense doesn’t warrant a headline.

UK PMI services rose to 55.1 in June, up from 54.0 and beat expectation of 53.9. Markit noted “robust and accelerated upturn in business activity, with new work increased at fastest pace for 13 months. Input cost inflation also intensified. The PMIs suggested 0.4% growth in Q2, up from Q1’s 0.2%. Surge in costs would also pick up inflation from the current 2.4%.

Chris Williamson, Chief Business Economist at IHS Markit, noted in the release that “stronger growth of service sector activity adds to signs that the economy rebounded in the second quarter. That “opens the door for an August rate hike, especially when viewed alongside the news that inflationary pressures spiked higher.

“The survey data indicate that the economy likely grew by 0.4% in the second quarter, up from 0.2% in the opening quarter of 2018. The sharp rise in business costs, linked to surging oil prices and the need to offer higher wages, suggests inflation will also pick up again from its current rate of 2.4%.

Eurozone PMI services revised up to 55.2, survey data points to above 0.5% GDP growth in Q2

Chris Williamson said that “eurozone growth regained momentum in June, rounding off a respectable second quarter performance”.Meanwhile, “firms’ costs and average selling prices for goods and services are meanwhile rising at rates close to seven-year highs, which will likely feed through to higher consumer price inflation in coming months.”

Williamson also added that “the upturn in the pace of economic growth and resurgent price pressures adds support to the ECB’s view that stimulus should be tapered later this year, but the details of the survey also justify the central bank’s cautious approach to policy.”

BoJ board member Yutaka Harada said in a speech that the central bank’s quantitative and qualitative monetary easing program delivered improvements to production, employment, investment, exports, and fiscal conditions. And, “further indicators are perceptions that the economy is recovering, improvements in income distribution, and women’s entry into the labor market.” He also hit back at the critics of BoJ’s policy as their arguments are “not supported by empirical evidence.”

Harada reiterated the BoJ’s stance that “it should continue with the current monetary easing with a view to achieving the price stability target of 2 percent, given that, for now, there is still room for an expansion in employment and that there are few signs of financial imbalances.”

Retail sales rose 0.4% mom in May, above expectation of 0.3% mom. Prior month’s figure was also revised up to 0.5%, from 0.4%. Ben James, Director of Quarterly Economy Wide Surveys noted in the release that “department stores (3.9 per cent) led the rises.” And, “there was also a strong result in clothing, footwear and personal accessories, which rose 2.2 per cent. Both industries were able to rebound after unusually warm weather impacted April sales.”

China Caixin PMI services rose to 53.9 in June, up from 52.9 and beat expectation of 52.7. Markit noted in the release that output expands at quicker rates at manufacturers and service provides. Staffing levels rise further at services companies, but continue to decline at goods producers. Meanwhile, there were sharper rises in input costs. The PMI composite stood at 53.0, up from 52.3, “suggesting a stable economy with a positive outlook.” 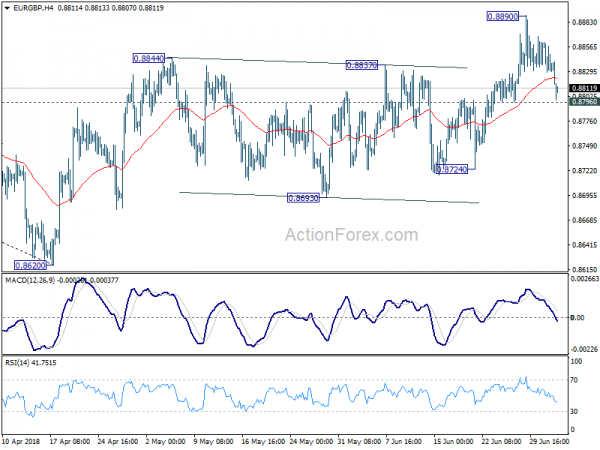 In the bigger picture, EUR/GBP is staying in long term consolidation pattern from 0.9304 (2016 high). Such consolidation pattern could extend further. Hence, in case of strong rally, we’d be cautious on strong resistance by 0.9304/5 to limit upside. Meanwhile, in another decline attempt, we’d expect strong support from 0.8116 cluster support (50% retracement of 0.6935 to 0.9304 at 0.8120) to contain downside. 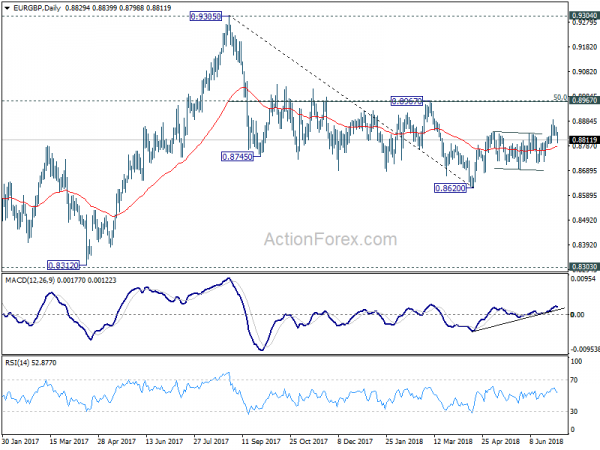