Pound stabilized as PM May’s position appears to be safe

In the UK, The reaction to David Davis’s resignation as Brexit Minister was muted yesterday. But that to resignation of Boris Johnson as Foreign Minister was huge. May’s position was called into question and the new softer Brexit Plan could collapse even before being formally published.

But the situation was stabilized quickly after Conservative Party chairman Brandon Lewis said he’s not expecting a confidence vote. High profile eurosceptic Jacob Rees-Mogg also said there is no call for May to resign. Robert Buckland, Solicitor General for England and Wales, was also quoted by Reuters saying that “the question of a leadership challenge, I think it’s out the window, gone.

So, as least for now, May’s position is safe. That helped stopped the selloff in Sterling and gave it a bit of strength for recovery. But the Pound is certainly not out of the woods yet.

German Chancellor Angela Merkel and Chinese Premier Li Keqiang agreed on protecting multilateral rules-based trading system as they met yesterday. Merkel said “we both want to sustain the system of World Trade Organization rules.” She added that
“we hope that Germany and China won’t get caught up in a global spiral of protectionism,” and “we have to express our conviction loud and clear.”

Merkel also hailed that Chinese is putting real effort in opening up the markets. She pointed to the deal, signed yesterday, for BASF SE to open an 100% owned chemical complex in Guangdong. It’s the first wholely-owned chemical maker project ever. Merkel said “this shows that China’s market opening in these areas isn’t just talk, but action.”

Li said along side Merkel that multilateralism plays “a strengthening, bolstering role” for the world economy. And, “I can’t imagine anyone can hold back the stream of globalization.”

ECB Draghi: Protectionism as main risks and united Europe should lead by example

ECB President Mario Draghi said yesterday at the ECON committee of the European Parliament that the central bank’s monetary policy measures “have been very effective”. There was an overall impact of 1.9% on both Eurozone real GDP growth and inflation for the period between 2016 and 2020. The measures are “playing a decisive role” in bring inflation on track to target. But he also emphasized the need to be “patient, persistent and prudent” to ensure inflation remains on a “sustained adjustment path.

Draghi also warned that downside risks to outlook “mainly relate to the threat of increased protectionism”. He emphasized that “strong and united Europe” can help “reap the benefits of economic openness while protecting its citizens against unchecked globalisation”. And, he also urged that in “leading by example”, the EU can lend support to multilateralism and global trade. That requires, domestically, “strong institutions and sound economic governance”.

He added that overall, the survey is consistent with NAB’s outlook for 2018. Despite easing a little recently, leading indicators remain positive suggesting continued growth in output and employment. Higher profitability and trading conditions as well as high rates of capacity utilisation also remain conducive to higher business investment. This growth will be necessary to reduce the amount of spare capacity in the economy, which should in time see a rise in prices and wages growth, which we consider key to the path of monetary policy over the next few years”

OPEC and UAE Energy Minister president Suhail al-Mazrouei criticized that it’s “unfair” to say OPEC for not doing its part and blame the group for oil price. This should be in response to Trump’s one-sided call for OPEC to increase production. Al-Mazrouei said the group always listen to a major consumer country as “we listen to the United States, we listen to China, we listen to India.”

But he added that “OPEC alone cannot be blamed for all the problems that are happening in the oil industry, but at the same time we were responsive in terms of the measures we took in our latest meeting in June.” And, “there are things outside of our hand, the geopolitics as well as how much production is coming from the shale oil and Canadian sands.”

OPEC agreed last month to increase production modestly and Al-Mazrouei said “we need to just give it time to enter the market”. He also emphasized that the group is seeking a balance between supply and demand, not targeting a specific price. Meanwhile, he didn’t anticipate any extraordinary meeting of OPEC before the next scheduled one in December.

The European session is rather busy today. UK will release the first monthly GDP figure. Trade balance and productions will also be featured. In Eurozone, German ZEW economic sentiment will be release. Later in the day, Canada will release housing starts and building permits.

GBP/USD dropped sharply to as low as 1.3189 and breached 1.3200 minor support. But the pair quickly recovered and intraday bias is now neutral first. On the downside, break of 1.3189 should confirm that corrective rise from 1.3048 has completed at 1.3362. And intraday bias will be turned to the downside for 1.3048 first. Break will resume larger fall from 1.4376 for 1.2874 fibonacci level next. In case of another rise through 1.3362, we’d expect strong resistance from 1.3471 to limit upside to finish the corrective rebound. 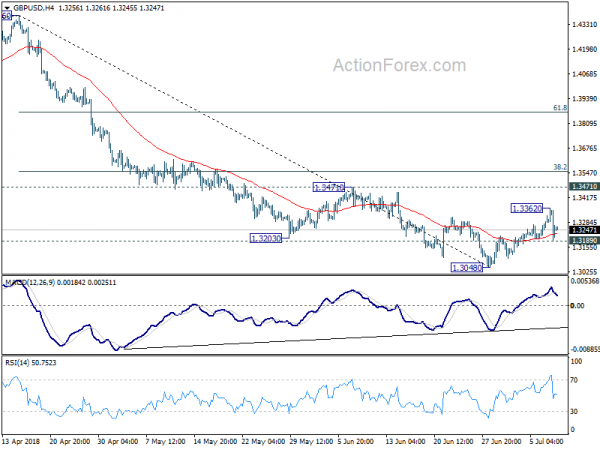 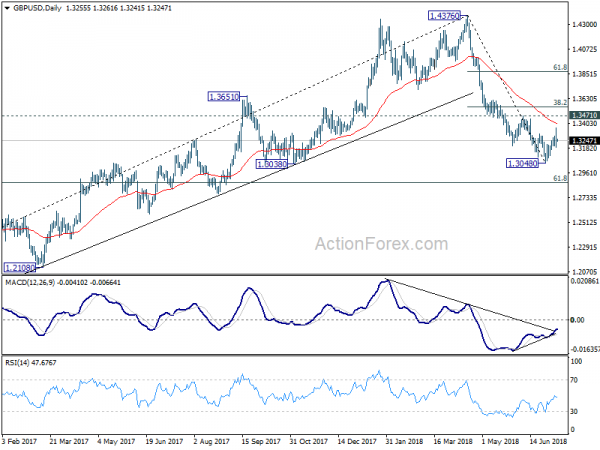