Renewed selloff in the Chinese Yuan weighs down sentiments across Asia and boosts the greenback today. USD/CHN breaks recent high at 6.912 to resume up trend. With that, China Shanghai SSE is trading down -2.31% at the time of writing. Hong Kong HSI is down -1.52%, Singapore Strait Times is down -0.17% and Nikkei is down -0.72%. Dollar is the clear winner in the currency markets. Yen and Canadian Dollar follow as the next strongest. Australian Dollar and New Zealand Dollar, on the other hand, suffer deep selling.

Technically, Dollar remains in up trend against Euro, Sterling and Australian Dollar. Meanwhile, USD/CHF, USD/JPY and USD/CAD are still kept in range. USD/JPY’s break of 111.17 minor resistance overnight is taken as indicate of near term reversal. That is, correction from 113.17 has completed at 110.10. But there is no clear cut upside momentum yet. We’ll see if these four currencies will stay strong altogether ahead.

The Chinese Yuan is under renewed selling pressure again today. USD/CNH (offshore Yuan) rises to as high as 6.921 so far and breaks 6.912 resistance. USD/CNH has been in steep rise since hitting a low at 6.2359, as trade tension between the US and China escalated. The next batches of tariffs will start next week and more are coming. The Chinese National Development and Reform Commission  pledged today to work on meeting this year’s 6.5% growth target. With usual way of interpreting Chinese rhetorics, it means they found it difficult to meet that target.

Now USD/CNH is on course to have a test on key resistance level at 6.9871, 2017 high. It remains to be seen if the government will intervene more aggressively. If the Yuan is solely moved by market forces, we see no reason why USD/CNH will not break 7 handle.

On the back of broad based strength in Dollar, Gold’s decline continues today and breaks 1190 handle to as low as 1188.42 so far. The down trend from 1365.24 is on track for 1172.06 fibonacci level. Daily RSI may indicate Gold is in oversold condition again. But based on current acceleration, RSI indeed suggests solid downside momentum. 1172.06 could be taken out without much hesitation and the next real hurdle is probably 1122.81 support. And in any case, near term outlook will remain bearish as long as 1217.20 resistance holds.

Australia Westpac Melbourne Institute consumer sentiment dropped -2.3% to 103.6 in August, down from 106.1. The index pared back half of the “surprisingly strong gains in June to Jule” as the impact of government’s tax cuts faded. The decline also came against the backdrop of rising global trade tension and housing markets correction in Sydney and Melbourne.

Westpac pointed out RBA’s projection that inflation will hit 2.25% by 2020 and expects next move is up. It noted an “obvious headwind” for RBA is “the impact that five years of underperformance in inflation will have on households’ and firms’ expectations.” And, “lower expectations will make it that much more difficult to lift inflation back into the band”. Westpac also noted that “certainly it will be quite some time before the Bank has a case to adjust the cash rate.” And it maintains the view that RBA will be on whole in both 2018 and 2019.

UK data will once again be the highlight in European session. Headline CPI is expected to accelerate from 2.4% yoy to 2.5% yoy in July. Core CPI is expected to be unchanged at 1.9% yoy. RPI, PPI and hour price index will also be released. Note that according to the August Inflation Report, BoE projects CPI to peak at 2.5% in Q3 this year, then slow to 2.2% in Q3 2019. It doesn’t expect a full 25bps rate hike until Q1 2020. One month of inflation data shouldn’t have much impact on something that’s going to happen in nearly 1.5 years time. So, with or without surprise, the down trend in Sterling will likely continue after the release.

Later in the day, a number of US data will be featured, including retail sales, industrial production, business inventories, NAHB housing index Empire state manufacturing and non-farm productivity. 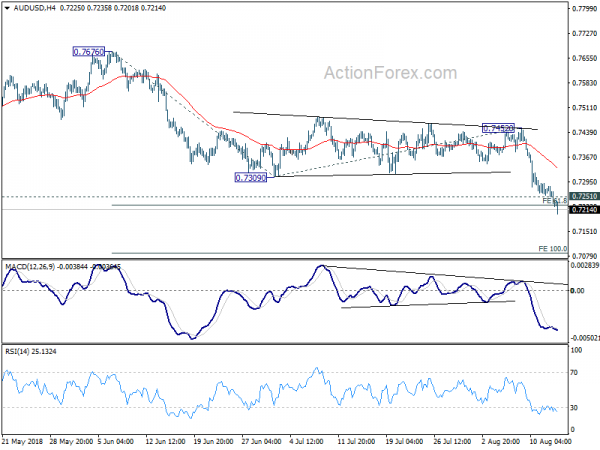 In the bigger picture, medium term rebound from 0.6826 (2016 low) is seen as a corrective move that should be completed at 0.8135. Fall from there should now have a test on 0.6826. There is prospect of resuming long term down trend from 1.1079 (2011 high). But we’ll look at downside momentum to assess at a later stage. On the upside, break of 0.7452 resistance is needed to indicate medium term bottoming. Otherwise, outlook will remain bearish even in case of strong rebound. 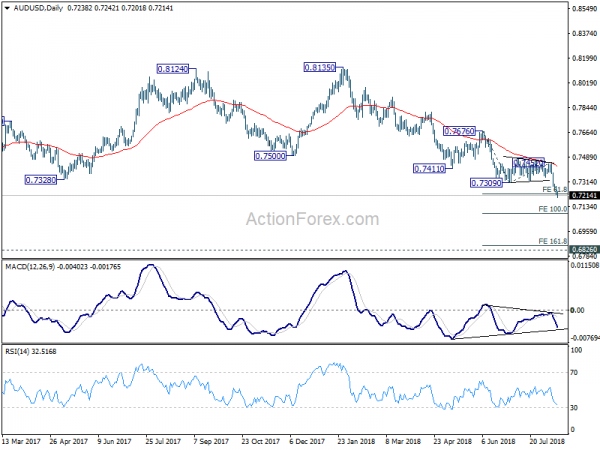