Dollar is under broad based selling pressure on falling treasury yields, globally. In particular, 10 year yield drops below 3% level for the first time since September. Canadian Dollar and Swiss Franc are following as the next weakest. On the other hand, return to risk aversion and falling global yields pop up Yen as the strongest. Sterling follows as second strongest, lifted by news that it could get a “get of of jail” card for revoking Brexit unilaterally.

Technically, Sterling’s rebound today after breaching near term support suggests that it’s not ready to resume recent down trend yet. The keys to watch for the rest of today are EUR/USD and USD/CHF. EUR/USD is in range of 1.1267/1472. USD/CHF is in range of 0.9908/1.0006. Break out of the ranges would reveal the broad direction in Dollar.

European Court of Justice’s advocate general said today that UK has the right to withdraw Brexit notice unilaterally, up to the point of formal conclusion of the deal. ECJ usually follow the advocate general’s opinions in its final rulings even though they’re not binding.

To be more exact, ECJ said “Advocate General (Manuel) Campos Sanchez-Bordona proposes that the Court of Justice should declare that Article 50 … allows the unilateral revocation of the notification of the intention to withdraw from the EU”. And, “That possibility continues to exist until such time as the withdrawal agreement is formally concluded.”

But the UK Prime Minister Theresa May’s spokesman quickly come out and said the government position on Brexit article 50 will not be revoked.

BoE Governor Mark Carney testified in the parliament today on the Brexit economic analysis today. Carney said the worst-case scenarios were “low-probability events in the context of Brexit” that BoE has to prepare the banking system for. But he also said “we’re already sleeping soundly at night, because we have the financial sector, the core of the financial sector, in a position that it needs to be for a tough scenario.”

Carney also defended the analysis and said “There’s no exam crisis. We didn’t just stay up all night and write a letter to the Treasury Committee. And, “You asked for something that we had, and we brought it, and we gave it to you.”

UK PMI construction rose to 53.4 in November, up from 53.2 and beat expectation of 52.5. That’s also the highest level in four months. Markit noted there is solid expansion of overall construction output. Residential work reclaims its place as best performing area of construction activity. Job creation accelerates to its fastest since December 2015.

Avvenire daily newspaper reported that Italian Prime Minister Giuseppe Conte said he will submit a new 2019 Draft Budget Plan to EU in the next few hours. There is no detail about the new plan yet. But Conte said new proposal could reasonably include a deficit lower than previously forecast. That is, it would be lower than the deficit target of 2.4% of GDP 2019.

European Commission for for Economic and Financial Affairs Pierre Moscovici said the Commission is waiting for concrete and credible moves from Italy on the budget. He noted that talks were now proceeding at an intense pace, but emphasized that the Commission was “waiting for more details”.

Australian Dollar trades mildly firmer against dollar after RBA left cash rate unchanged at 1.50%. But it’s overall steady and mixed as reaction to RBA is rather muted. In short, RBA maintained that fall in unemployment rate will eventually lift inflation to target. But again, the central bank expected the progress to be “gradual”, implying that there is no urgency to lift interest rate any time soon.

On the economy, the central scenario for GDP growth is to average around 3.5% in 2018 and 2019. Then it would slow to 2020 due to slower growth in export of resources. Outlook for labor market remains “positive”. Improvement in the economy should see “some further lift in wages growth” over time, gradually. CPI is expected to pick up over the next couple of years gradually to. And, the central scenario if for inflation to be at 2.25% in 2019 and a bit higher in 2020.

Also release in Asia Pacific, Japan monetary base rose 6.1% yoy in November versus expectation of 5.7% yoy. Australia current account deficit narrowed to AUD -10.7B in Q3. 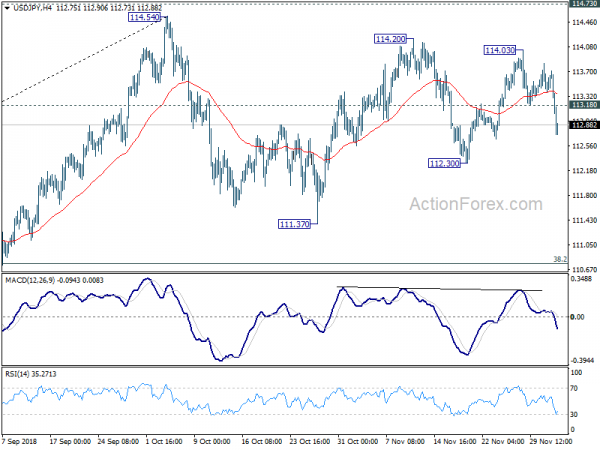 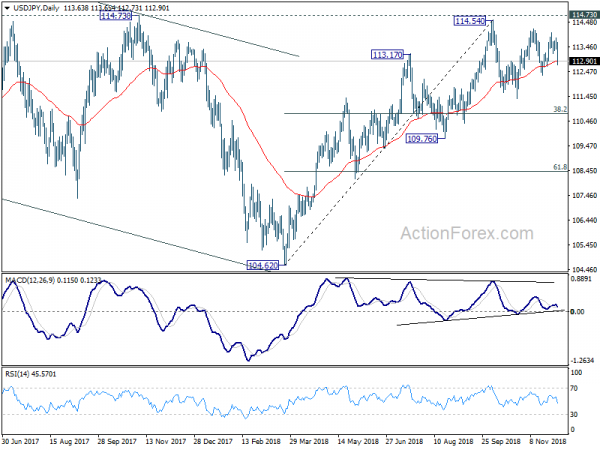