The forex markets are rather mixed and quiet today. Trading has also become a bit subdued as US is on Martin Luther King day holiday. But UK Prime Minister Theresa May’s Brexit plan B might still trigger some volatility. For now, New Zealand Dollar remains the weakest one for the day. It’s followed by Canadian Dollar and Australian Dollar. Yen is the strongest one, followed by Euro and then Dollar. But there is actually no apparent sign of risk aversion. The markets are just mixed.

Technically, USD/CHF finally broke 0.9963 resistance, which should indicate completion of correction from 1.0128 at 0.9716, further rise is in favor to retest 1.0128. EUR/CHF is pressing 1.1340/8 resistance zone too. Break will bring further rally. Dollar is apparently trying to strength elsewhere too. But EUR/USD has to break 1.1353 minor support first. Also, AUD/USD needs to break 0.7116 minor support and USD/CAD needs to break 1.3323 minor resistance to proved underlying Dollar strength.

UK PM May to table her Brexit plan B

Today’s focus is on UK Prime Minister Theresa May’s Brexit plan B. She’s due to make a statement in the parliament at 1530 GMT. Her spokesman said the Brexit will have to be changed if it’s to be approved by lawmakers. And there were talks going on to understand what exact changes are needed.

German Foreign Minister Heiko Maas has urged the UK to come back with concrete proposal on solving the Brexit deadlock in its parliament. He tweeted that “So far, unfortunately, the British Parliament has only said what it does not want. What we need now are concrete proposals from the British. The ball is in London, there is not a lot of time left. We #Brexit will also be talking about this in Brussels today. ”

Separately, German Economy Minister Peter Altmaier said “Personally I’m optimistic that we can avoid a hard Brexit but the German government is of course prepared for all possible scenarios.”

Ireland’s European Affairs Minister Helen McEntee said today Ireland wont’ engage in bilateral negotiation with the UK on the Irish border backstop issue. She said, “What we can’t do and what we won’t do, because we have not throughout this entire process, is engage in any kind of bilateral negotiations with the DUP or any other political party in Northern Ireland or the UK. This is a negotiation between the EU and the UK.”

China GDP growth slowed to lowest in 28 years, but stabilization seen in December

China GDP growth slowed to 6.4% yoy in Q4, down from 6.5% yoy and matched expectation. For the whole year of 2018, growth slowed to 6.6%, lowest in 28 years since 1990. National Bureau of Statistics head Ning Jizhe said the impacts from trade war with the US are manageable. There were signs of stabilization in the economy over the past twos months. And he added the country has confidence and the capacity to achieve reasonable growth in 2019.

More in Chinese Economy Shows Signs of Stabilization in Late 2018. More Challenge Ahead

IMF revised down global growth forecasts and warned that “the global expansion is weakening and at a rate that is somewhat faster than expected.” Also, ” risks to more significant downward corrections are rising.” And, “while financial markets in advanced economies appeared to be decoupled from trade tensions for much of 2018, the two have become intertwined more recently, tightening financial conditions and escalating the risks to global growth.”

In particular, IMF warned that “an escalation of trade tensions and a worsening of financial conditions are key sources of risk to the outlook.” Meanwhile, China’s slowdown could be worsened by trade tensions and trigger “abrupt sell-offs in financial and commodity markets”. “Brexit cliffhanger”, “financial risk in Italy ” and “protracted US federal government shutdown” are other risks.

USD/CHF’s rally continues today and break of 0.9963 resistance should confirm the bullish case. That is, corrective fall from 1.0128 has completed at 0.9716 already. Intraday bias is back on the upside for retesting 1.0128 next. On the downside, below 0.9932 minor support will turn intraday bias neutral again. But near term outlook will remain cautiously bullish as long as 0.9856 minor support holds. 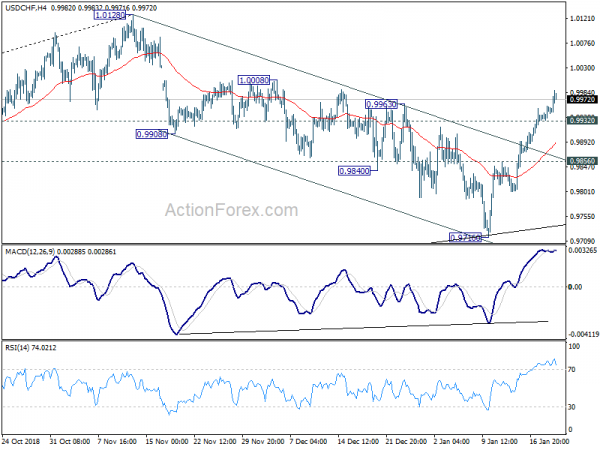 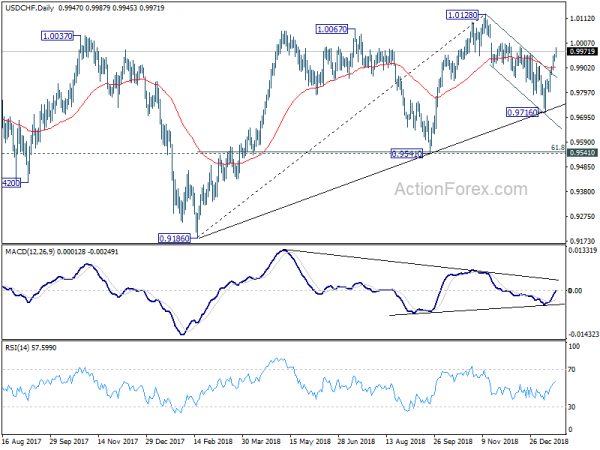