Risk sentiments stabilized in Asia today despite the selloff in US overnight. But so far, momentum for rebound in stocks is very weak. Major indices are stuck in right range between gains and losses, in particular in China and Hong Kong. Yen is trading as the weakest one for the moment, partly also thanks to BoJ’s sharp downward revision in fiscal 2019 inflation forecast. Swiss Franc follows as second weakest. On the other hand, New Zealand Dollar is boosted by better than expected CPI data, which reduces bets on RBNZ rate cut. Australian Dollar follows as second strongest. But Aussie’s recovery, similar to stocks, lacks conviction.

Technically, Sterling’s rise now puts near term resistance levels into focus. Those levels include 1.3001 in GBP/USD, 142.22 in GBP/JPY and 0.8763 in EUR/GBP. Decisive break will likely bring more broad based rally in the Pound. Yen’s recovery yesterday proves to be rather short-lived. Focus is back on 109.89 in USD/JPY and 125.09 in EUR/JPY. Break will resume recent rebound in yen crosses. Meanwhile, AUD/USD is still pressing 0.7116 minor support. Firm break there will indicate near term bearish reversal.

The short term interest rate is held unchanged at -0.1%. And under the yield curve control frame work, BoJ will continue to kept 10-year JGB yield at around 0%, with some upward and downward movements allowed. The annual amount of JGB purchase will be kept at JPY 80T.

Member G. Katakoa dissented as usual, pushing to strengthen monetary easing. Y Harada also dissented again, criticizing that allowing the long-term yields to move upward and downward to some extent was too ambiguous

On economy, BoJ maintained that “Japan’s economy is likely to continue on an expanding trend through fiscal 2020.” Also, “overseas economies are expected to continue growing firmly on the whole, although various developments of late warrant attention such as the trade friction between the United States and China.”

In the new GDP projections, comparing with October forecasts:

The revisions showed that while BoJ is optimistic for 2019, it also sees larger uncertainties.

The downside revision in fiscal 2019 core CPI is rather steep.

New Zealand Dollar is lifted notable today but better than expected consumer inflation data. CPI rose 0.1% qoq in Q4 versus expectation of 0.0% qoq. On annual basis, CPI was unchanged at 1.9% yoy, above expectation of 1.8% yoy. The data eased worries that inflation outlook is worsening and chance for a rate cut by RBNZ is reduced. Majority of economists are still expecting the next move to be a hike. But for now, there is no time frame for that move yet.

Meanwhile, the outlook is still clouded by fading momentum in the economy, as show in recent forward-looking indicators. There is question on whether domestic inflation could sustain. And should data ahead disappoint, there bets on rate cut will re-emerge.

There were rumors that Trump’s administration declined, or cancelled, a second deputy-level meeting with China on trade. The meeting was intended for preparation on the top level meeting between US Trade Representative Robert Lighthizer and Chinese Vice Premier Liu He. There were various versions of the rumor. But the key message was that the US is not satisfied with the lack of concrete progress on intellectual property theft and forced technology transfer. China’s offer to buy more goods from the US is simply not enough.

But White House economic advisor Larry Kudlow came out denying the rumor and said there was “no cancellation”. And he maintained the high-level meeting later this month between Lighthizer and Liu was “very, very important” and “determinative.” And, “There were no other intermediate meetings scheduled,” while “The story is unchanged. We are moving towards negotiations.”

Yet, Kudlow also emphasized that “enforcement is absolutely crucial to the success of these talks.” “Promises are great but enforcement is what we want — things like deadlines and timetables and full coverage of the various structural issues,” he said. “Will this all be solved at the end of the month? I don’t know. I wouldn’t dare to predict.”

US Senate to hold competing votes to end government shutdown

The US Senate will hold two competing votes on Thursday as effort to end the record government shut down. Trump’s plan, which includes USD 5.7B for border wall will be voted on. Also, Democrat’s proposal, to reopen government through February 8, will also be voted on. It’s seen as a concession by Senate Majority Leader Mitch McConnell who previously refused to vote on a bill that Trump would veto.

Trump includes a provisional three-year work permits for the youngsters under Deferred Action for Childhood Arrivals program as bargaining chip. But his plan is still likely to be voted down as Democrats have open rejected to compromise on the issue.

The Democrats could gain enough support from Senate Republicans rebels to vote for their proposal, which was already pass in the House. However, even so, Trump will likely veto even if the Democrat’s bill is passed in the Senate. The Democrats are way short of two-third majority to override Trump’s veto.

UK CBI trends total orders is the only feature in European session. Later in the day, Canada will release retail sales. US will release house price index. Eurozone will release consume confidence.

Intraday bias in GBP/USD remains neutral with focus now back on 1.3001 temporary top. Break there will resume whole rebound from 1.2391 and target 1.3174 resistance, which is close to 38.2% retracement of 1.4376 to 1.2391 at 1.3149. We’d expect strong resistance from there to limit upside, at least on first attempt. For now, further rise is expected as long as 1.2668 minor support holds, even in case of another retreat. But break of 1.2668 support will argue that such rebound is completed and turn bias back to the downside for retesting 1.2391 low.

In the bigger picture, whole medium term rebound from 1.1946 (2016 low) should have completed at 1.4376 already, after rejection from 55 month EMA. The structure and momentum of the fall from 1.4376 argues that it’s resuming long term down trend from 2.1161 (2007 high). And this will remain the preferred case as long as 1.3174 structural resistance holds. GBP/USD should target a test on 1.1946 first. Decisive break there will confirm our bearish view. However, sustained break of 1.3174 will invalidate this case and turn outlook bullish. 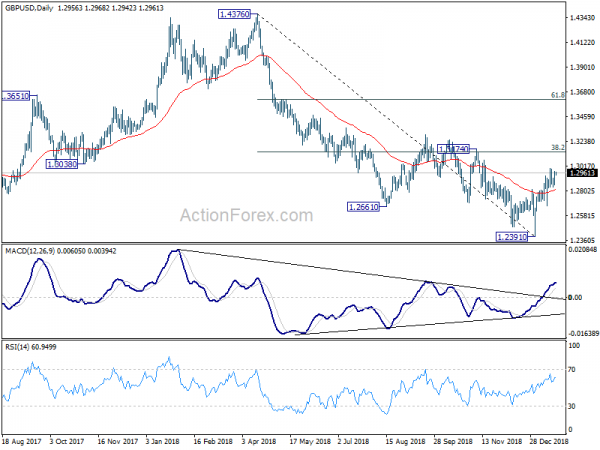