Dollar jumps notably in early US session against Swiss Franc and Yen following stronger than expected ADP job report. But strength in the greenback is not broad based. Traders are cautiously await FOMC statement and press conference, to see how cautious Fed would sound. There is prospect of a stronger comeback in Dollar should Fed doesn’t sound dovish at all. In addition, any news from meeting of Chinese Vice Premier Liu He and US Trade Representative Robert Lighthizer will also be closely watched.

Staying in the currency markets, Australian Dollar remains the strongest one for today following stronger than expected CPI reading. Canadian Dollar follows closely with help from rebound in oil price. Sterling is mildly higher today as Brexit uncertainties continue. The Pound is the weakest for the week following yesterday’s Brexit development. While UK Prime Minister Theresa May is seeking re-negotiation on Irish backstop, EU shows no sign of backing down from the stance of not reopening negotiation.

Technically, USD/CHF’s break of 0.9990 resistance suggests resumption of rally from 0.9716. The pair should now head towards 1.0128 key resistance. USD/JPY will likely take on 110.00 resistance too. For now, AUD/USD is held below 0.7235 resistance, and thus, it’s staying in near term consolidation. Similarly, USD/CAD is held above 1.3180 support and is staying in consolidation too.

US ADP report shows 213k job growth in private sector in January, well above expectation of 170K. Prior month’s figure was revised down slightly from 271k to 263k.

Ahu Yildirmaz, vice president and co-head of the ADP Research Institute said in the release “the labor market has continued its pattern of strong growth with little sign of a slowdown in sight”. And, there was “significant growth in nearly all industries, with manufacturing adding the most jobs in more than four years”.

Mark Zandi, chief economist of Moody’s Analytics, said, “The job market weathered the government shutdown well. Despite the severe disruptions, businesses continued to add aggressively to their payrolls. As long as businesses hire strongly the economic expansion will continue on.”

Fed is widely expected to keep federal funds rate unchanged at 2.25-2.50%. Since December, following extreme market volatility and cautious turn in Fedspeaks, pricing of Fed’s rate path changed drastically. Fed funds futures are now only pricing in around 20% chance of a 25bps hike by the December meeting. Dollar then started weakening broadly. The greenback suffered another round selloff last week after a WSJ report suggesting that the Fed members are considering to end the balance sheet reduction plan earlier than previously expected.

The first focus today will be on forward guidance in the statement. Back in December, FOMC noted that “the Committee judges that some further gradual increases in the target range for the federal funds rate will be consistent with sustained expansion of economic activity, strong labor market conditions, and inflation near the Committee’s symmetric 2 percent objective over the medium term.”

But since then, Fed officials sung a chorus, saying that Fed can afford some patience before another rate move. And Fed chair Jerome Powell even indicated that Fed is flexible to move in either direction if necessary. Any change in the forward guidance that hints at a pause could give Dollar more pressure.

And secondly, Powell will need to indicate if there is any change in Fed’s balance sheet reduction plan.

Irish Foreign Minister Simon Conveny said today that the so called alternative arrangements for Irish backstop that UK is now seeking are options around time limits, exit clauses and technology. But he dismissed such options as “we have been through all of these things.”

He added “we have tested them and we have found that they do not stand up to scrutiny, and now we have a British prime minister advocating again for the same things that were tested.”

Conveny then complained that “What we are being asked to do here is to compromise on a solution that works and to replace it with wishful thinking. That’s what’s being asked of the Irish government and we won’t do it.”

In addition, he emphasized UK Prime Minister Theresa May has “outlined repeatedly that the backstop is not only desirable but necessary to reassure people in Northern Ireland so surely the responsible thing for the Irish government to do is to hold the British government to its word.”

German CPI dropped -0.8% mom in January, matched expectation. But annual rate slowed sharply to 1.4% yoy, down from 1.7% yoy, and missed expectation of 1.6% yoy. Today’s German CPI miss should weigh on expectation for Eurozone CPI reading to be released later in the week, it’s expected to slow to 1.4% yoy.

Germany Gfk consumer confidence rose 0.4 to 10.8 in February, above expectation of 10.3. Gfk noted that rising income prospects and an increasing propensity to buy mean that the consumer climate is improving once more. This is further reinforced by a decrease in propensity to save in January.

Swiss KOF dropped to 95.0, negative developments in manufacturing and services

Swiss KOF Economic Barometer dropped for he fourth time in a row to 95.0 in January, below expectation of 98.1. It’s now 5pts below its long term average.

KOF noted that “The downward tendency that emerged at the end of last year continues. The economic outlook for Switzerland continues to dampen at the beginning of 2019”. And, “this renewed decline is especially attributable to negative developments within the manufacturing industry and the service industry. In addition, export prospects cloud over.”

Also release in Asian session, Japan retail sales rose 1.3% yoy in December, above expectation of 0.9% yoy. Consumer confidence dropped to 41.9 in January, down from 42.7, beat expectation of 42.5.

USD/CHF’s strong rally and break of 0.9990 resistance suggests resumption of rise from 0.9716. Intraday bias is back on the upside. As noted before, corrective pull back from 1.0128 has completed at 0.9716 already. Rise from 0.9716 should target 1.0128 resistance next. On the downside, break of 0.9905 support is now needed to indicate completion of the rebound. Otherwise, outlook will remain bullish in case of retreat. 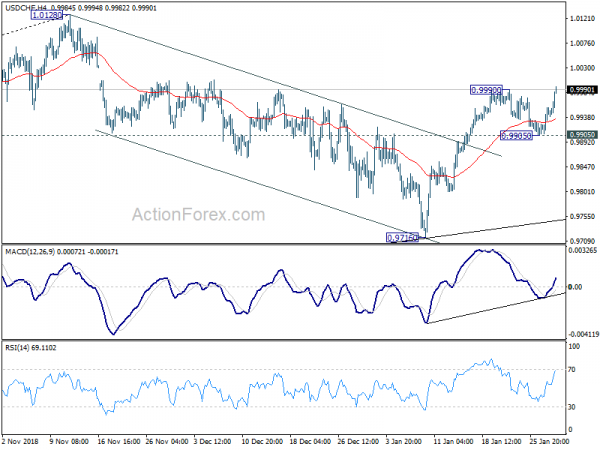 In the bigger picture, USD/CHF drew strong support from medium term trend line and rebounded. That suggests rise from 0.9186 is still in progress. Break of 0.9963 will affirm this bullish case. Further break of 1.0128 will confirm up trend resumption and target 1.0342 key resistance. Nevertheless, break of 0.9716 will dampen this bullish view and at least bring deeper fall to 0.9541 key support. 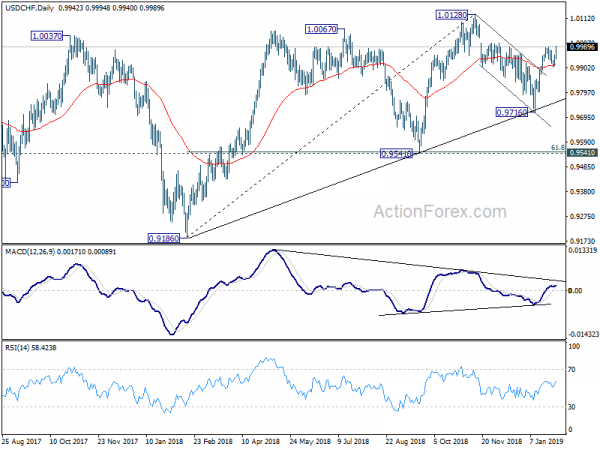