Dollar turns weaker again in early US session after data disappointment. Also, the USDA reported that US farm exports to China will suffer steep decline. Business in the US are eager to know more about the progress of US-China trade negotiation. There are reports that China offers to buy USD 30B more US agricultural products a year. And the two teams are working on multiple MOUs to conclude this week’s meetings. But so far, there’s no confirmation on any of the rumors yet.

Staying in the currency markets, Dollar is just the third weakest one for today, next to Australian and New Zealand Dollar. Aussie was knocked down as Westpac forecast two RBA cuts this year. Then, it suffered further selloff news that China’s Dalian port has banned imports of Australian coal. Sterling is the strongest on for today on hope there will be an updated Brexit deal to vote on next week. Euro follows as PMI composite improved in February.

Fed Bullard: Monetary policy normalization is coming to and end

St. Louis Fed President James Bullard said in a CNBC Squawk Box interview that Fed is already near the end of rate hikes and balance sheet rolloff. And, “the message from my point of view is the normalization process in the United States is coming to an end.”

To him, interest rates are actually too high now. But this is a minority view in FOMC. He further explained that December rate hike was “a step too far” and he “argued against that Move”.

After December’s hike, Bullard noted  “a bad reaction in financial markets. I think the market started to think we were too hawkish, might cause a recession.”

UK Leadsom confirms schedule for next Brexit vote on Feb 27

UK Leader of the House of Commons Andrea Leadsom confirmed to hold a vote on Brexit on Wednesday February 27. Prime Minister Theresa May will deliver a statement on Tuesday first. The vote will either be on an updated Brexit agreement, or on the other way ahead.

Leadsom said “if the government has not secured a majority in this house in favor of a withdrawal agreement and a political declaration, the government will make a statement on Tuesday Feb. 26, and table an amendable motion relating to the statement and a minister will move that motion on Wednesday Feb. 27, thereby enabling the house to vote on it and any amendments to it on that day.”

He added that Prime Minister Theresa May’s meeting with European Commission President Jean-Claude Juncker went well. And “both sides have acknowledged that the political declaration could be expanded, for example, to address concerns that have been expressed in some parts of the House of Commons about workers rights.”

Separately, it’s believed that May and Juncker are working on a statement called “appropriate legal assurance to both sides”. Brexit minister Steve Barclay and Attorney General Geoffrey Cox will visit Brussels again today.

ECB: Risk largely external but there were pass-through and spillovers

In the accounts of January monetary policy meeting, ECB noted that “a stronger case could now be made for assessing the risks as having moved to the downside” In “large measure”, downside risks could be attributed to external environments including heightened protectionism and Brexit. But there were “pass-through and spillovers” to domestic demand.

ECB also acknowledged that “slowdown in euro area growth appeared to be deeper and more broad-based than previously anticipated”. And, “negative developments had become more widespread across the euro area, and risked affecting several components of demand”. The slowdown has previously be related primarily to trade. But private consumption growth was weaker in Q3, and employment growth decelerated. ECB noted that “if exports and consumption were both weaker, this was likely to be transmitted to investment in the period ahead. ”

All in all, “members concurred with the view that the risks to the euro area outlook had moved to the downside on account of the persistence of uncertainties related to geopolitical factors and the threat of protectionism, vulnerabilities in emerging markets and financial market volatility.” Outlook for economy would be “reassessed in more depth” in March meeting, when the new ECB staff projections would be available.

Chris Williamson, Chief Business Economist at IHS Markit said, “the Eurozone economy remained close to stagnation in February… continuing to indicate one of the weakest rates of expansion since 2014” The data suggest GDP may struggle to rise by much more than 0.1% in Q1. Meanwhile, Germany is on course to 0.2% growth but France looks set to stagnate, or even contract very slightly.

He added that “the weakness is being led by manufacturing, which has now entered its first downturn since mid- 2013. ” But “solid domestic demand in many countries, notably Germany, continued to help support service sector growth and offset the downturn of the manufacturing sector. ”

China’s Dalian port has banned imports of the Australia’s coal. The ban came effective at the start of February already and it’s indefinite. Under the control of Dalian customers, Dalian, Bayuquan, Panjin, Dandong and Beiliang harbour will not allow Australian coal to clear through customers. That’s part of the measures to cap overall coal imports through the above harbours to 12m tonnes this year. Coal imports from Russia and Indonesia will not be affected. It’s also reported that clearing times for Australian coal at other ports are prolonged to at least 40 days.

China’s foreign ministry spokesman Geng Shuang said the goals of the ban were to “better safeguard the legal rights and interests of Chinese importers and to protect the environment”.  Australia’s Minister for Trade Simon Birmingham said “I’m aware of unconfirmed and unsourced media reports and have asked our Ambassador in Beijing to urgently clarify their veracity.” He added that “We continue to engage closely with industry on matters of market access … China is a valued partner of Australia and we trust that our free trade agreement commitments to each other will continue to be honored.”

Australian Dollar was initially lifted by the employment data, but was then knocked down as Westpac forecasts RBA to cut interest rate in August and November. Westpac noted that “the forces around a slowing economy, falling house prices, and weak consumer spending are already apparent.” But RBA might take time to recognize this “persistence”. The central bank’s decision to “accept the possibility that interest rates could fall further, despite the current record low levels, is profoundly important.” Westpac is now “confident” that if their growth profile does evolve, RBA will be “prepared to act”.

Japan PMI manufacturing dropped to 48.5, chance of recession in 2019 rises

Japan PMI manufacturing PMI dropped to 48.5 in February, down from 50.3. That’s the lowest level in 32 months and the first contraction reading since 2016. Markit noted that “deterioration in manufacturing sector reflects stronger falls in production and new orders.” Also, “future output expectations turn negative for the first time since November 2012.”

Joe Hayes, Economist at IHS Markit, said the data reflected “sharper reductions in demand and production” and “underlying business conditions are unfavourable.”.And, “this was further highlighted by output expectations turning negative for the first time in over six years, which comes as no surprise given the international headwinds Japanese manufacturers are facing such as a China slowdown and the global trade cycle losing further steam.

He added that “unless service sector activity can offset manufacturing weakness, the chance of Japan entering a recession in 2019 looks set to rise.”

Also from Japan, all industry activity index dropped -0.4% mom in December, below expectation of -0.2% mom. 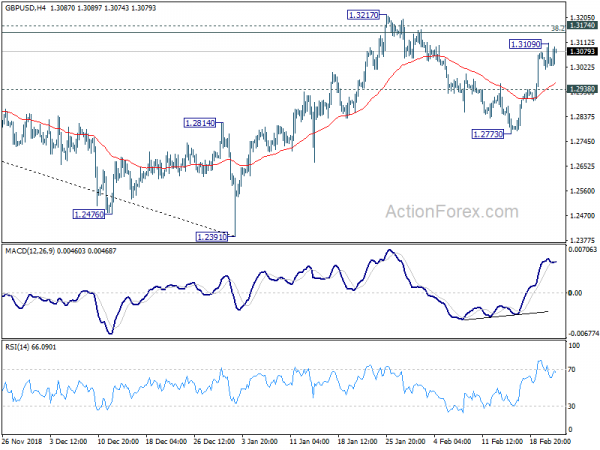 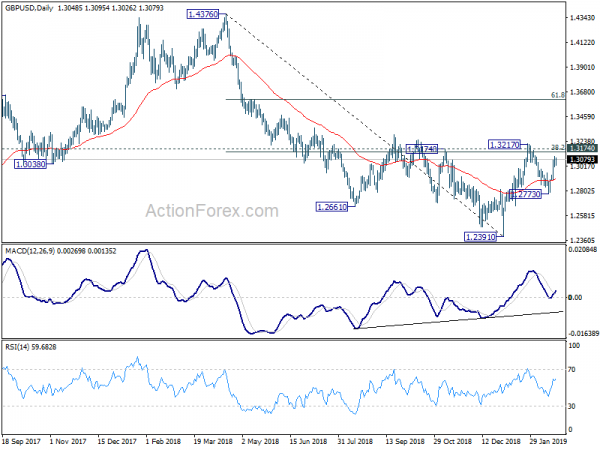