Risk aversion Dominates the market today as the world awaits a new “season” in US-China trade war drama. At this point, with Trump’s hard line rhetoric, it’s very doubt if Chinese Vice Premier Liu He could turn around the situation in his visit to Washington today. New rounds of tariffs will very likely take effect tomorrow, and China’s retaliations would soon follow. After a few months of “recess”, trade-war is going to escalate to another level.

In the US markets, DOW opens sharply lower and is trading down over -300pts at the time of writing. The strong break of 55 day EMA now serves as a strong warn of bearish reversal for the near term. 10-year yield is also back pressing 2.44. In the currency markets, Swiss Franc and Yen are naturally the strongest ones. Euro display much resilience as it’s competing with Dollar as third strongest. Australian Dollar is the weakest one followed by Sterling and Canadian.

Technically, 0.6962 in AUD/USD is an immediate focus and break will resume recent fall from 0.7295. USD/CAD, with today’s rise, could be challenging 1.3521 resistance too. Break will also resume recent rise from 1.3068. USD/PY is pressing 109.71 key support. Firm break there could trigger downside acceleration.

US jobless claims dropped to 228k, trade deficit at USD -50B

Chinese Ministry of Commerce spokesman Gao Feng said in a regular briefing that “the U.S. side has given many labels recently, ‘backtracking’, ‘betraying’ etc … China sets great store on trustworthiness and keeps its promises, and this has never changed.”

Gao added, “we hope the U.S. can meet China halfway, take care of each others’ concerns, and resolve existing problems through cooperation and consultations” But he also said that “China’s attitude has been consistent, and China will not succumb to any pressure”. Gao warned “China has made preparations to respond to all kinds of possible outcomes.”

At a rally in Florida late yesterday, Trump accused that China “broke the deal” as the trade negotiations entered the final stage. And he pledged no to back down on tariffs unless China “stops cheating our workers”. He said, “I just announced that we’ll increase tariffs on China and we won’t back down until China stops cheating our workers and stealing our jobs, and that’s what’s going to happen, otherwise we don’t have to do business with them”. And, ‘They broke the deal,” he added. “They can’t do that. So they’ll be paying. If we don’t make the deal, nothing wrong with taking in more than $100 billion a year.”

UK opposition Labour Jeremy Corbyn said there is no big offers from Prime Minister Theresa May on Brexit yet. An he urged May to move her red lines.

Corbyn said “So far in those talks there’s been no big offer and the red lines are still in place.”  “Its actually quite difficult negotiating with a disintegrating government, with cabinet ministers jockeying for succession rather than working for an agreement.”

“Quite honestly, the government has to move its red lines. We cannot go on having MV1, MV2, MV3 and then coming on for possibly MV4 or a bill we have yet to actually see” he added.

May’s spokesperson said there are significant work to do to reach a unified way forward to break a parliamentary impasse over Brexit. And the government is working hard to introduce the Brexit Withdrawal Agreement bill as soon as possible.

Kuroda: BoJ won’t do anything on exchange-rate, it’s MOF’s job

BoJ Governor Haruhiko Kuroda told parliament today that the biggest factor on markets’ trust in Yen is BoJ’s commitment to price stability. He said “currency rates move on various factors, so it’s hard to judge market trust in the yen by looking at exchange-rate fluctuations alone.” Instead, “confidence in the central bank’s policy is a big factor behind market trust in the country’s currency”.

Kuroda also said BoJ is watching exchange-rate moves carefully. However, currency policy falls under the jurisdiction of the Ministry of Finance. Thus, “BOJ would not do something for exchange-rate stability”.

RBNZ Orr: Get ahead of the curve with this week’s rate cut

RBNZ Governor Adrian Orr toned down the chance of another rate cut after yesterday’s, as he addressed a parliamentary committee today. He noted that “at the moment we see in the outlook for interest rates as…balanced”. Regarding yesterday’s cut, Orr pointed out that “the reason for the cut is global economic growth has slowed.” “Growth has come off rapidly in Europe, in China, though that’s stabilized more recently, and Australia … so key trading partners.”

Separately, Orr also told the Morning Report that the cut was “sensible” as our “forward projection [showed] a lower rate. And the question for the committee was “do we wait or do we move now”. Orr said “Moving now is the best choice for us as far as we consider because it means we get ahead of the curve – we aren’t chasing the economy in cycles, we’re actually getting ahead and removing the cycles.”

USD/PY dips further to 109.60 so far today and intraday bias stays on the downside. Sustained break of 109.71 key support will confirm completion of rebound from 104.69 at 112.40 on bearish divergence condition in daily MACD. Deeper decline should then be seen back to retest 104.69 low. On the upside, though, rebound from current level and break of 110.28 minor resistance will mix up near term outlook. Intraday bias will be turned neutral in this case first. 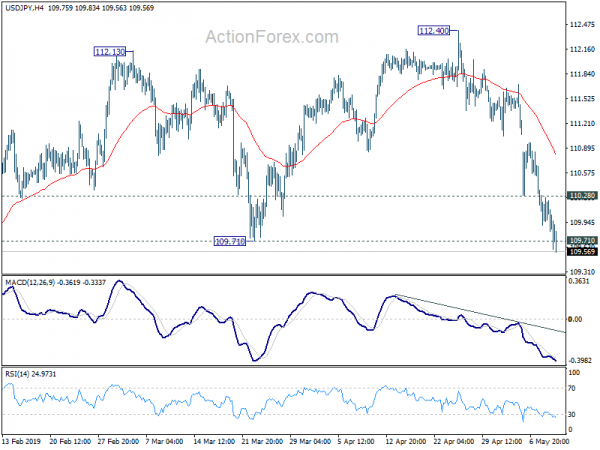 In the bigger picture, USD/JPY is staying inside falling channel from 118.65. Thus, there is no confirmation of trend reversal yet. Sustained break of 109.71 will argue that rebound from 104.69 is completed. And the down trend from 118.65 is still in progress. But at this stage, in case of break of 104.69, we’d expect strong support above 98.9 (2016 low) to contain downside an bring rebound. 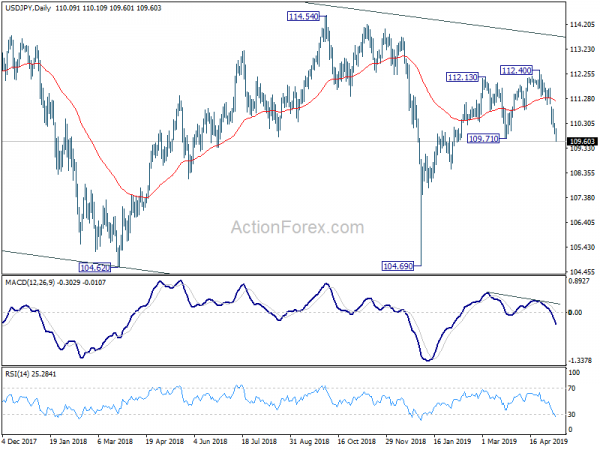