Market sentiments are generally steady today. Better than expected job and housing data lift Dollar mildly higher in early US session. Yen and Swiss Franc are trading of the softer side, paring some of this week’s gains. While US moves to contain Huawei catch a lot of headlines, there is practically no negative reactions in the markets. Chinese stocks ended the day higher while US futures also point to higher open. It will take a while more to see what’s next in US-China trade and political tensions.

Meanwhile, Sterling’s selloff is gathering momentum again, in particular against Dollar and Euro. UK government keeps saying that talks are continuing with opposition Labor and pledges to bring back the Brexit Withdrawal Agreement as soon as possible. But traders are clearly impatient with the lack of concrete progress. If seemed that politicians in the two biggest parties of the UK didn’t learn anything from recent local election defeats.

Euro is steady as Italian yield retreats while German yield recovers. German 10-year yield is back above -0.1 after initial dive. Though, it’s unsure whether it can sustain above this -0.1 handle. US auto tariffs are another major uncertainty for the Eurozone, in particular Germany. While there were rumors that Trump will delay auto tariffs decisions, Commerce Secretary Wilbur Ross sounds noncommittal today. He just noted that Trump has many options on May 18, when a decision is due.

The Chinese government is apparently furious at US move to sanction its telecom giant Huawei. Tensions of the two sides is set to escalate further while there is no set timing for resuming the collapsed trade talks. While Trump might want to meet Xi to clear out the outstanding issues to seal a trade deal at the upcoming G20 summit, the two sides are actually moving farther apart.

Trump’s administration hit Huawei on two heavy measures yesterday. Firstly, the U.S. Commerce Department is adding Huawei and 70 affiliates to its “entity List” that bans them from buying US technologies without government approval. Secondly, Trump signed an executive order banning US companies from using telecom equipment made by companies deemed to pose a national security risk. As Commerce Secretary Wilbur Ross put, the decision was to “prevent American technology from being used by foreign-owned entities in ways that potentially undermine U.S. national security or foreign policy interests.”

Chinese commerce ministry spokesman Gao Feng said today “China has emphasized many times that the concept of national security should not be abused, and that it should not be used as a tool for trade protectionism… China will take all the necessary measures to resolutely safeguard the legitimate rights of Chinese firms.”

On trade Gao warned “the tariff hike by the United States will only bring greater difficulties to the consultations… “We urge the United States to cancel the wrong practices as early as possible, avoiding greater losses to Chinese and American companies and consumers, and causing a ‘recession-like’ impact on the world economy.”

Gao also also clarified the three concerns on China. Firstly, all tariffs must be removed in order to reach a deal. Secondly, additional purchase of US goods is an issue to be resolved. Thirdly, the text of the agreement must be balanced, respecting each other’s sovereignty. Gao emphasized, “to reach any agreement, China’s three core concerns must be properly resolved,”

Separately, Foreign ministry spokesman Lu Kang, said “negotiations and consultations, to have meaning, must be sincere… First, there must be mutual respect, equality and mutual benefit. Second, one’s word must be kept, and not be capricious.”

Bundesbank President Jens Weidmann warned today that trade wars would damage the global economy and are useless in reducing current account deficit. He said “some expect higher tariffs to reduce current account balances… But this hope may prove futile, our analyses suggests.”

Also, Trump’s new tariffs will pose risks to the US economy. And, “retaliatory tariffs of other countries are likely to further weaken the global economy and world trade. Trade wars only know losers.”

Domestically, he admitted that inflation is “stubbornly low”. However, if outlook allows it, there is no need to postpone monetary policy normalization.

ECB Visco: Eurosystem ready to use a wide of of instruments to support economy

ECB Governing Council member Ignazio Visco said today that the economic prospects of Eurozone are clouded by uncertainties. Italy and global economy are experiencing a difficult time too. He noted that trade, mostly fueled by US, added to global economic slowdown. And as Bank of Italy Governor, he urged the country to boost productivity to fully recovery its growth path.

Though, he dismissed the worries that ECB is “disarmed” should current situation deteriorates into a full-blown recession. He emphasized “central banks can rely on a wide range of instruments to support economic activity and, if necessary, the Eurosystem is ready to use them all in order to fulfill its mandate.”

BoJ Wakatabe: QQE has clearly positive impact on the economy and prices

BoJ Deputy Governor Masazumi Wakatabe reiterated to the parliament that the quantitative and qualitative easing program (QQE) had “clearly positive” impact of the economy and prices. And, benefits of easing is “outweighing” its costs. He admitted that BoJ hasn’t put a sustained end to deflation yet while inflation remains below 2% target. But he emphasize “we’re seeing an end to a long period of time when consumer prices kept falling.” On exit, he said “how an exit from easy policy affects BOJ’s balance sheet would depend on various factors such as means, the order in which it exits.”

Released from Japan, Domestic CGPI rose 1.2% yoy in April, above expectation of 1.1% yoy.

In April, Australia employment rose 28.4k, more than expectation of 15.2k. However, the growth was mainly driven by 34.7k growth in part-time jobs. Full-time employment contracted -6.3k. Unemployment rate rose to 5.2%, up from 5.1% and above expectation of 5.0%. That’s also an eight-month high. But participation rate also rose 0.2% to record high of 65.8%.

Looking at some details, in seasonally adjusted terms, the largest increase in employment was in New South Wales (up 25.1k), followed by Western Australia (up 6.4k) and Queensland (up 5.4k). The only decrease was in Victoria (down 7.6k).

GBP/USD drops further to as low as 1.2793 so far today and intraday bias stays on the downside. Rebound from 1.2391 should have completed 1.3381 already. Deeper fall should be seen to retest 1.3381 low. On the upside, above 1.2851 minor resistance will turn intraday bias neutral for consolidation first. But recovery should be limited well below 1.3176 resistance to bring fall resumption. 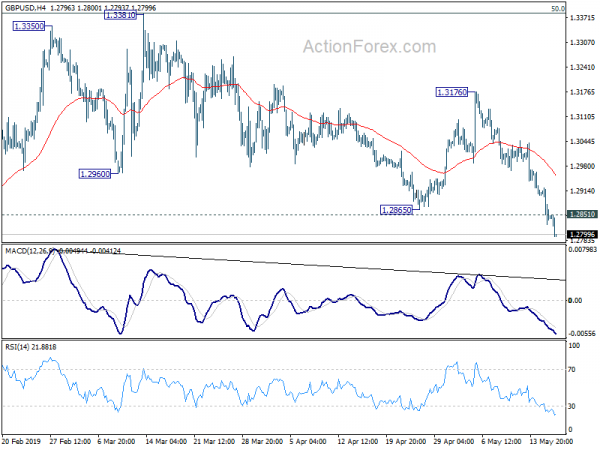 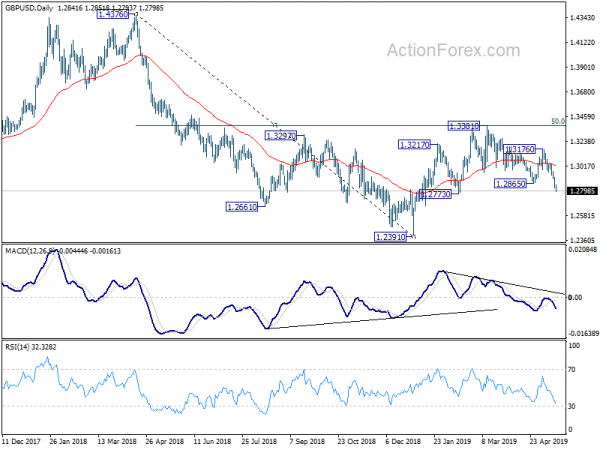