Risk aversion eased mildly today as markets respond positive to US decision to delay the sanctions of Huawei for 90 days. After some initial hesitation, Yen sell-off is picking up momentum in early US session, because of rally in stocks and treasury yields. On the other hand, Sterling is recovering mildly, as traders takes profit on short positions. UK Prime Minister Theresa May is set to scheduled to announce her new Brexit deal at 1500GMT.

For now, we’d view the above moves as temporary. Firstly, the move by US Commerce Department was mainly for housekeeping purpose only. That is, it’s for preventing sudden disruptions on the internet, telecom on the US side. It’s by no means an end to US-China trade tension. More importantly, given the hard line rhetorics from both sides, we’re not seeing any chance of a deal in that 90 days window. Secondly, May has repeated history of delivering nothing special on Brexit. Pound could be back under pressure should May disappoint again.

The more sustainable underlying move is in Australian Dollar. RBA Governor Philip Lowe was clear in his speech that they’re going to considering cutting interest rate in June meeting. Even if RBA chooses to wait again in June, it looks inevitable that they’ll still deliver the rate cut in August. The uncertainty lies only in timing. Aussie will likely stay pressured ahead.

In the currency markets, Aussie is rightly below the weakest one for today so far. Yen follows as second weakest, then New Zealand dollar. Canadian Dollar is the strongest one, followed by Sterling, and then Dollar. Technically, 55 day EMA at 110.84 is a key level to watch in USD/JPY. As long as it holds, further decline is expected and Yen will likely resume recent broad based rise sooner or later. Though sustained break would probably pull other Yen crosses higher together.

UK CBI trends total orders dropped to -10 in May, down from -5 and missed expectation of -5. 23% of manufacturers reported total orders books above normal. 32% said they were below normal. The -10 balance was the worst since October 2016, but stayed broadly in line with long-run average of -13.

Anna Leach, CBI Deputy Chief Economist, said: “With investment down, stockpiling up, and the threat of a no-deal ever present, we desperately need parliament to thrash out a viable deal in the national interest. Where the cross-party talks failed, Parliament must succeed, or continued economic paralysis will see us hurtle ever closer to disaster.”

ECB Vice President Luis de Guindos urged Eurozone banks to build extra capital buffers to mitigate the risk of unexpected shocks. He said “the slower growth momentum we are seeing increases the risk of tail events, in other words, shocks that are unlikely to occur, but would have a significant impact on the financial system and the economy if they did.”

“The continued build-up of buffers could therefore be justified, especially in those countries where the long upturn may have led to an underestimation of credit risk or where private indebtedness is particularly high or rising.”

BoJ Governor Haruhiko Kuroda warned of the impact of US-China trade war again in the parliament today. He said “if trade tensions persist, they would have a widespread impact on global and Japanese economies via business sentiment and market developments.” And, “we hope the United States and China engage in constructive discussions.”

US grants housekeeping temporary exemptions on restrictions on Huawei

The US Commerce Department announced limited exemptions on products of Chinese telecom giant Huawei. The move is seen as for keeping the house in order, so as to prevent internet, computer and cell phone systems from crashing

Under the move, Huawei and its 68 non-US affiliates will be granted 90 days temporary general license to have limited engagement in transactions involving the export, reexport, and transfer of items.

With the arrangement, “this license will allow operations to continue for existing Huawei mobile phone users and rural broadband networks”. The Commerce Department said it will evaluate whether to extend the exemptions beyond 90 days.

OECD lowered global growth forecast to 3.2% in 2019, down from March projection of 3.3%. Chief Economist Laurence Boone warned that “the fragile global economy is being destabilized by trade tensions.” And, growth is stabilizing but the economy is weak and there are very serious risks on the horizon. Governments need to work harder together to ensure a return to stronger and more sustainable growth.”

On US-China trade war, OECD warned that an intensification of trade restrictions would have significant costs. The new tariffs and measures announced this month could reduce GDP growth in US and China by 0.2-0.3% on average by 2021 and 2022. Under the scenarios of additional 25% tariffs on essentially all remaining bilateral trade between US and China, “the short term costs are considerably higher and broader”. Global trade could be reduced by 1% by 2021. US GDP could dropped by 0.6% while China GDP could drooped by 0.8%.

However, it should also be noted that GDP growth projection was revised up by 0.2% to 2.8% in 2019 and by 0.1% to 2.3% in 2020. OECD said “in the absence of further shocks, the economy is on track to continue its solid expansion and grow
somewhat faster than the rest of the OECD on average”.

USD/JPY’s recovery form 109.02 extends higher today but outlook remains unchanged. Intraday bias stays neutral and upside should be limited by 55 day EMA (now at 110.83) to bring another fall. On the downside, below 109.81 minor support will turn bias back to the downside for 109.02. Break there will extend the decline from 112.40 to retest 104.69 low. However, sustained trading above 55 day EMA will indicate completion of the fall from 112.40 and bring retest of this high. 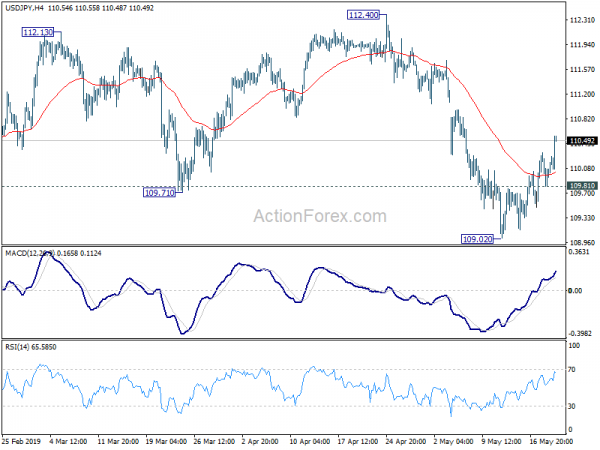 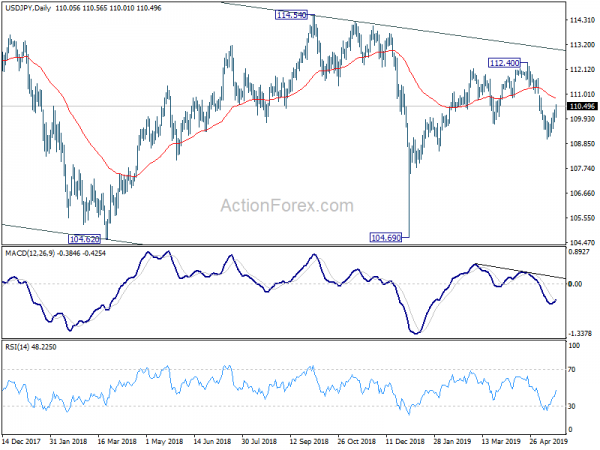