The forex markets are rather mixed today. Dollar suffered very brief selling after CPI miss. But the greenback quickly regains footing as the readings are not bad enough to push Fed for a cut. For now, Sterling is the strongest one for today, followed by Yen and then Dollar. Swiss Franc is the weakest, followed by Aussie and then Kiwi. There is no clear theme for the moment.

Technically, EUR/USD’s failure to take out 1.1347 temporary top suggests more consolidative trading could be seen for now. Though, further rise is expected with 1.1251 minor support holds. Also, near term outlook in USD/CHF, USD/JPY and USD/CAD remains bearish with 1.0008, 109.02 and 1.3363 resistance levels intact respectively. MO re downside remains in favor in Dollar, except versus Aussie.

While consumer inflation slowed mildly, there was no marked deterioration. Fed shouldn’t be having much urgency to cut interest unless there is further escalation in trade war between US and other countries like China. Indeed, Fed could hold their bullets at least until Trump decides to tariff all untaxed Chinese imports, or even when he starts auto tariffs on EU and Japan.

ECB President Mario Draghi said in a speech that “general slowdown is being felt in all economies in the region. The so called “central and eastern European (CEE) economies” model has become “vulnerable to shocks to international trade and financial conditions”.

He added that “global trade has faced headwinds in recent years as trade-restrictive measures have outpaced liberalizing measures.” CEE economies have been “disproportionately affected” by this for two reasons. Firstly, trade in CEE economies is “especially responsive cyclical developments”, with “trade elasticity” higher than the rest of EU. Secondly, they have “increasingly specialised in certain industries: which made the “more exposed to industry-specific shocks.”

ECB de Galhau: ECB can do more if slowdown becomes a real slamming of the brakes

Also, “if the current slowdown becomes a real slamming of the brakes, we can do more than we are doing currently”. However, he also warned that “they can temporarily attenuate the consequences of a weaker global economy, but they cannot take care of the cause.” De Galhau referred to uncertainty created by trade tensions.

European Commission warned in a statement released today that “In light of the continued uncertainty in the United Kingdom regarding the ratification of the Withdrawal Agreement – as agreed with the UK government in November 2018 – and the overall domestic political situation, a ‘no-deal’ scenario on 1 November 2019 very much remains a possible, although undesirable, outcome.

The Commission said it has screened all the no-deal preparation measures. And it “concluded that there is no need to amend any measures on substance and that they remain fit for purpose. The Commission does not plan any new measures ahead of the new withdrawal date. ”

European Commissioner for Economic and Financial Affairs Pierre Moscovici said the ball is in “Italy’s court” regarding the country’s excessive budget that could lead to disciplinary procedure. He added, “We need to see a credible path for 2019 as well as 2020. We stand ready to take into account any new elements that Italy may put forward, but let’s not waste time.”

Australia Westpac Consumer Confidence dropped -0.6 to 100.7 in June. Westpac noted that it’s a “disappointing result” given the RBA’s rate cut on June 4. Also, the results suggests “deepening concerns about the economy have outweighed the initial boost from lower rates. ” Looking at some details, economic expectations for the next 12 months dropped -4.7 to slightly pessimistic territory at 99.3. Though, House Price Expectations Index rose notably by 22.7 to 109.7, in clear response to the rate cut.

Westpac also said “initial sentiment reaction to the June rate cut will be somewhat disappointing for the Bank”. After disappointing Q1 GDP, RBA will need to “make a further downgrade to its growth forecasts”. And “the case for further policy easing remains clear”. Westpac expects another 25bps cut in August.

Intraday bias in EUR/USD remains neutral as consolidation from 1.1347 is extending with another falling leg. With 1.1251 minor support intact, further rise is mildly in favor. On the upside, above 1.1347 will target 1.1448 key resistance next. Decisive break there will carry larger bullish implications. On the downside, break of 1.1251 minor support will suggest that recovery from 1.1107 has completed. Intraday bias will be turned back to the downside for retesting 1.1107 low. 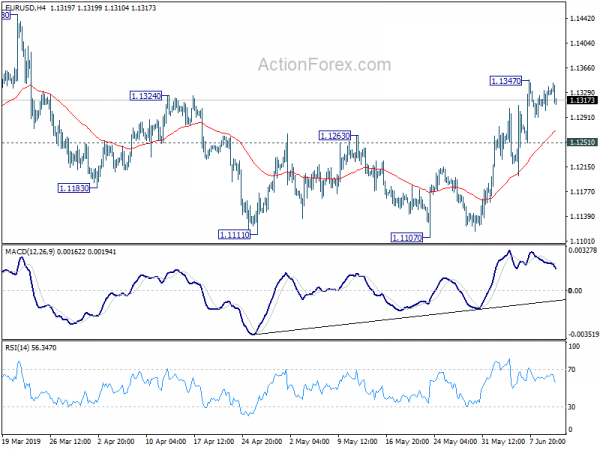 In the bigger picture, current development argues that a medium term bottom could be in place at 1.1107, on bullish convergence condition in daily MACD. Decisive break of 1.1448 resistance would confirm this case. And stronger rebound would be seen to 38.2% retracement of 1.2555 to 1.1107 at 1.1660. At this point, it’s early to judge whether rise from 1.1107 is a corrective move or the start of an medium term up trend. We’d look at the structure of the rebound to decide later. But in any case, for now, risk will remain on the upside as long as 1.1107 low holds. 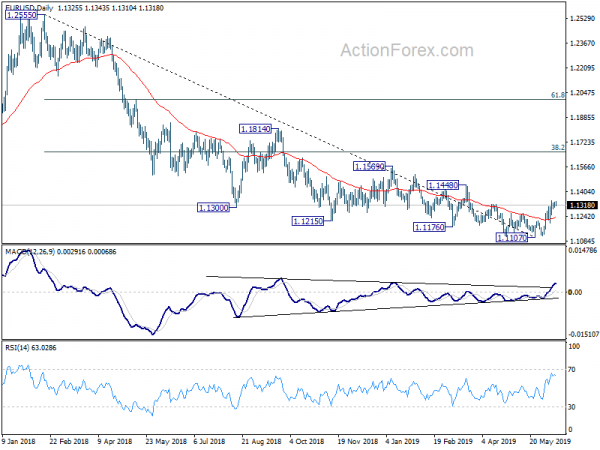 Euro Looks Too Hot To Handle

Nasdaq Conquers New Heights As US Infections Slow Down