Market sentiments were given two strong boosts yesterday, first by ECB’s indication of monetary stimulus ahead, then by renewed optimism of US-China trade negotiations. Positive sentiments carried forward to Asian session, with strong rally seen in major indices. Though, reactions in currency markets are relatively “refrained” as traders are holding their bets ahead of FOMC rate decision. Two Ps – Patience and Projections – will guide the forex markets ahead.

For now, New Zealand Dollar is the strongest one for the week so far, but it’s mainly consolidating recent decline. Yen is the second strongest, thanks to sharp fall in major treasury yields, in particular with German 10-year yield hitting new record low. But then, Yen’s rally is capped by strong risk appetite. On the other hand, Sterling is the weakest one, as Boris Johnson is stepping closer to become UK Prime Minister. Euro is the second weakest on Dovish ECB.

Should Fed really delivers something dovish today, there are a few technically levels to watch to confirm weakness in Dollar. 107.81 support in USD/JPY is probably the most important level to watch to gauge Dollar weakness. Break will resume recent fall from 112.40. Similarly, break of 0.9925 minor support in USD/CHF and 1.1247 resistance in EUR/USD will also show Dollar weakness too. Break of 1.3328 minor support in USD/CAD could also suggests completion of recovery from 1.3239. But that might be due to Canadian CPI or oil inventory data.

Two Ps to watch in FOMC: Patience and Projections

Fed is widely expected to keep federal funds rate unchanged at 2.25-2.50% today. After recent rhetorics from Fed officials, markets are now looking for clues on rate cuts later in the year. As of yesterday, Fed fund futures are pricing in 85.3% of an “insurance” cut in July to 2.00-2.25%. By December meeting, markets see 83.6% chance of a total of two cuts to bring interest rates to 1.75-2.00%. However, in our view, the pricings are based on assumption of further worsening of US-China trade war. Such expectations could drastically change after Trump’s “extended meeting” with Xi at G20 next week.

As for today’s announcement, a major focus is this sentence in the statement: “the Committee will be patient as it determines what future adjustments to the target range for the federal funds rate may be appropriate”. Change in the statement to remove the element of “patience” will be a strong indication that Fed is ready to move. Otherwise, July could be a little too soon for the “insurance” cut.

Additionally, we’d emphasize that the changes in the statement have to be confirmed by new economic projections. In March, 2019 median projections forecasts GDP to grow 2.1%, unemployment rate to be at 3.7%, core PCE to be at 2.0%. There have to be material downgrades in the numbers, in particular core PCE, support Fed’s cut. And of course, Fed projected interest rates to be at 2.4%, that is no change from current 2.25-2.50%, by the end of 2019. This figure has to be revised down too. After all, we believe that the high uncertainty of trade war should be disregarded in the forecasts. So, if they’re dovish, they’re really dovish.

Here are some suggested readings on FOMC:

Trump: I think we have a chance for a trade deal with China

Risk appetite was given a strong boost as US and China are returning to the table for trade negotiations. The news started with Trump tweeting yesterday that he had a “very good telephone conversation” with Chinese President Xi Jinping. And Trump said both will have an “extended meeting” next week at the G20 in Osaka, Japan. The phone call was also confirmed by China’s state media.

Later at the White House, Trump told reporters, “I think we have a chance. I know that China wants to make a deal. They don’t like the tariffs, and a lot of companies are leaving China in order to avoid the tariffs”. He added “I think the meeting might very well go well, and frankly our people are starting to deal as of tomorrow. The teams are starting to deal. So we’ll see. China would like to make a deal. We’d like to make a deal, but it has to be a good deal for everybody.”

Chinese state media reported Xi saying “The key is to show consideration to each other’s legitimate concerns. We also hope that the United States treats Chinese companies fairly. I agree that the economic and trade teams of the two countries will maintain communication on how to resolve differences.”

Former UK Foreign Minister Boris Johnson further solidified his place as far and away favorite to be the next Conservative Leader and Prime Minister. In the last round of leadership vote on Thursday, Johnson got 126 votes, nearly three times of runner-up, current Foreign Minister, Jeremy Hunt’s 46. Environment Secretary Michael Gove was third with 41 votes, and International Development Secretary Rory Stewart was fourth with 37, Home Secretary Sajid Javid had 33. Dominic Raab, with 30 votes, was knocked out.  More votes are scheduled for Wednesday and Thursday.

In a televised debate yesterday, Johnson pledged that “we must come out on the 31 Oct. because, otherwise I am afraid we face a catastrophic loss in politics”. And, “unless we do it, unless we get out on Oct. 31 I think we will all start to pay a really serious price.”

Separately, Masatsugu Asakawa, Japan’s vice finance minister for international affairs, said more substantial talks on trade policy will be held in the G20 summit in Osaka next week. But he also noted that “Japan won’t take sides on US-China trade friction, our stance is to not take steps that violate WTO rules.”

The Thomson Reuters/INSEAD Asian Business Sentiment Index dropped sharply from 63 to 53 in Q2. Worries over US-China trade war sent sentiments down to the worst reading since Q2 of 2009. The index tracks companies’ six-month outlook. The survey interviewed 95 companies in 11 Asia-Pacific countries that together contribute about a third of GDP and are home to 45% of the world’s population. It was conducted from May 31 to June 14.

Antonio Fatas, professor at global business school INSEAD said “it was the uncertainty about the trade war and people were worried about the future”. And, “after four quarters of low numbers that now, it’s not just uncertainty. This is a true slowdown in growth. We see activity declining — it’s not just the expectation that activity will decline.”

UK inflation data will be the main focus in European session with CPI, RPI and PPI featured. House prince index will be released too. Eurozone will release current account. Later in the day, Canada CPI will take center stage first, followed by FOMC rate decision.

Intraday bias in EUR/USD remains on the downside at this point and further decline should be seen towards 1.1107 low. We’d stay cautious on strong support from 1.1107 low to bring rebound. On the upside, above 1.1247 minor resistance will turn bias back to the upside for 1.1347 again. 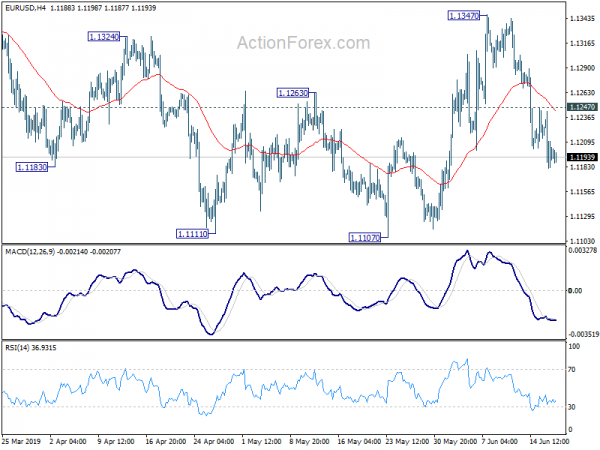 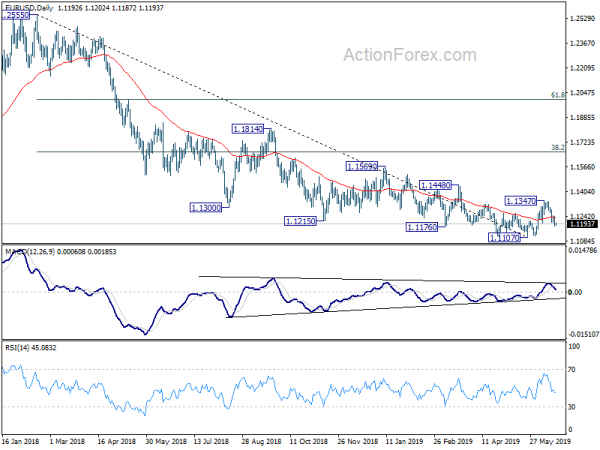