Yen rises broadly today as major treasury yields are resuming recent decline. German 10-year yield hits new record low at -0.33 while US 10-year yield is back below 2.0 handle. Though, New Zealand Dollar is even stronger as record export in May solidifies the case for RBNZ to stand pat tomorrow. At this point, Canadian Dollar is the third strongest as WTI oil is back above 58.

On the other hand, European majors are generally the weakest. Swiss Franc leads the was as it’s paring recent rise, as imminent risk of war in middle east is averted. Nonetheless, fresh US sanctions on Iran are enough to push gold towards 1440 handle. Euro and Sterling also pare back some gains against Dollar as markets are awaiting comments from Fed chair Jerome Powell. Markets will be keen to know how close is Fed to rate cut.

US Perdue: Farmers are one of the casualties of Trump’s trade war

US Agriculture Secretary Sonny Perdue admitted that farmers are “one of the casualties” of Trump’s trade war. He told CNN that American farmers “are one of the casualties here with trade disruption”. And, “we knew going in that when you flew the penalty flag on China, the retaliation, if it came, would be against the farmer.”

Perdue added “I’ve told the President — and the President understands — you can’t pay the bills with patriotism. We know that, and certainly he knows that. That’s why he’s trying to supplement the damage they’re having from trade disruptions with market facilitation.”  However, he said he cannot promise any more aids for 2020.

UK CBI reported sales dropped sharply to -42 in June, down from -27 and way off expectation of -3. That is, 16% of retailers said sales volumes were up in June of a year ago. 58% said they were down. It also indicates that retail sales volumes fell at their fastest pace since March 2009 in the year to June

CBI said: “Recent data suggests UK economic growth has slowed noticeably in the second quarter of 2019, as the boost from stockpiling activities in Q1 fades. We expect the UK to return to a subdued growth path further ahead, although risks from Brexit uncertainty and global trade tensions remain heightened.”

According to a prepared speech for delivery today, Italian Economy Minister Giovanni Tria said “for a zero growth economy like Italy” a 2.1% deficit represented “a more than prudent fiscal policy”.

He added that the country is targeting to keep deficit low in the coming years. And the government will continue to lower its debt through reducing spending. Thus, “on this basis, we feel that Italy is substantially compliant with European fiscal rules.” Tria is also confidence of reaching an agreement over its budget with the EU.

EU leaders are expected to approve the so-called Excessive Deficit Procedure on July 8-9 summit, which would lead to penalty to Italy over its budget. It’s reported that European Commission would give Italy until January to make necessary budget corrections.

The minutes of April 24-25 BoJ meeting showed that some members suggested clarifications on the forward guidance, “with the aim of strengthening public confidence in its monetary easing stance”. That came as “many members” recognized the “high uncertainties” regarding economic outlook and prices. And, it was likely to “still take time to achieve 2 percent inflation”.

In the statement after that meeting, BoJ added: “The Bank intends to maintain the current extremely low levels of short- and long-term interest rates for an extended period of time, at least through around spring 2020, taking into account uncertainties regarding economic activity and prices including developments in overseas economies and the effects of the scheduled consumption tax hike.”

One member said “at least through around spring 2020” as providing a specific time frame with open-ended elements. Some members also noted that clarifying the meaning of “for an extended period of time” implied a fairly long period of time was necessary.

Also from Japan, corporate service price index rose 0.8% yoy in May, below expectation of 1.0% yoy.

In May, New Zealand good export rose 8.5% yoy to NZD 5.8B, hitting a record high. Import rose 7.6% yoy to NZD 5.5B. Trade surplus came in at NZD 264m, above expectation of NZD 200m. In particular, exports to China rose 29% yoy to NZD 1.5B led by rises in milk powder, beef, food preparations and logs. Strong terms of trade reaffirms RBNZ’s stance to stand pat tomorrow. Yet, the central bank will likely maintain openness to further rate cut later in the year.

Intraday bias in USD/JPY remains on the downside at this point. Current fall from 112.40 is in progress and should target a test on 104.69 low. On the upside, above 107.73 minor resistance will turn intraday bias neutral again. But outlook will remain bearish as long as 108.80 resistance holds. 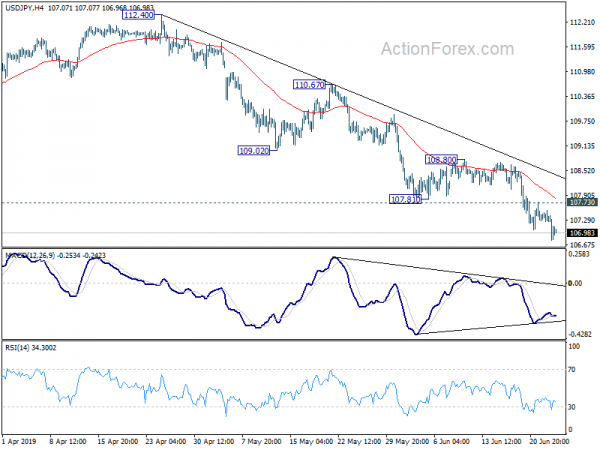 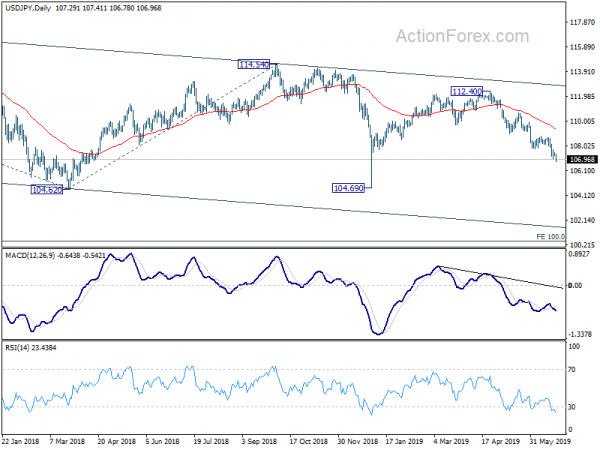