Australian Dollar is trading as the strongest one for today in spite of RBA’s second consecutive rate cut. Additionally buying is seen after RBA Governor Philip Lowe talked about four positive developments that could help the economy in a speech. Though, the Aussie is held in range against Dollar for now and there is no indicate of larger rise resumption yet. For Now, Yen is following as the second strongest, partly thanks to falling major treasury yields again. In particular, German 10-year bund yield hits another record on as EU is preparing for tariff escalations by US.

On the other hand, New Zealand Dollar is the weakest, one, followed by New Zealand Dollar. Sterling is the third weakest after shockingly poor construction PMI. Dollar is mixed for today but remains the strongest one for the week. Resumption of trade talk with China remains a Dollar supportive factor, as well as yesterday’s ISM Manufacturing. Though, the greenback will still need to face tests from ISM Services as well as Non-Farm Payrolls later in the week. These data will be crucial for Fed to decide if an insurance rate cut is needed this month.

UK PMI construction dropped to 43.1, worst contraction over a decade

UK PMI Construction dropped sharply to 43.1 in June, down from 48.6 and missed expectation of 49.2. It’s also the worst contraction since April 209. Markit noted that business activity declined for second month running. There was sharpest drop in house building for three years. And, new orders shrank as political uncertainty hits client confidence.

Tim Moore, Associate Director at IHS Markit, said: “The latest survey reveals weakness across the board for the UK construction sector, with house building, commercial work and civil engineering activity all falling sharply in June. Delays to new projects in response to deepening political and economic uncertainty were the main reasons cited by construction companies for the fastest drop in total construction output since April 2009. While the scale of the downturn is in no way comparable that seen during the global financial crisis, the abrupt loss of momentum in 2019 has been the worst experienced across the sector for a decade.

German retail sales dropped -0.6% mom in May, well below expectation of 0.5% mom. Compared with 2018, for the first fives months of the year, retail sales rose 2.8% in real terms. The weak data dampened hope that domestic demand could offset the drag from global trade on the export-led economy. Euro is steady after the release. But German 10-year bund yield is extending recent record run, hitting as low as -0.364 so far today.

USTR proposes tariffs on additional USD 4B of EU products

Just days after agreeing to stop tariff escalation with China, US is now turning to EU. Yesterday, US Trade Representative proposed tariffs on additional EU imports, as countermeasures to harm caused by EU aircraft subsidies. A “supplemental list” of 89 subheadings with approximate trade value of USD 4B was proposed. The list includes olives, Italian cheese and Scotch whiskey, etc.

That’s additional to the USD 21B in EU imports published on April 12. A hearing will be held on the proposed additional products on August 5. But US could immediately impose increased duties on the products included in the initial list, if the WTO arbitrator issues a decision before the public comment period ends.

He said, “we are boring and are sticking to our expansionary monetary stance.” He reiterated “we speak of negative interest rates and a readiness to intervene in the foreign exchange markets.” And he emphasized “we have flexibility and room to manoeuvre on both core instruments. We are absolutely convinced we can use these tools and will continue to do so.”

Also Zurbruegg he noticed that international developments are having strongest influences on the Franc exchange rate. However, “it is not a given that we have to react to each and every development.”

RBA Lowe talks four developments that will help the economy

Australian Dollar is apparently lifted by some positive comments by RBA Governor Philip Lowe in a speech. He noted that the two recent rate cuts, including today’s, will “make an important contribution to putting us on a better path and winding back spare capacity”. More importantly, he pointed out four developments that will help the economy.

Firstly, borrowing costs for almost all borrowers are now the lowest they have ever been. It’s partly because of the RBA cuts and partly due to tighter credit spreads. Secondly, terms of trade have risen again, largely due to higher iron ore prices. And RBA expects a “solid upswing” in the resources sector. Thirdly, exchange rate has depreciated over the past couple of years. Fourthly, RBA expects stronger growth in household disposable income over the next couple of years, due to low and middle income tax offset.

Together with the downside risks, globally and domestically, “what all this means for us here in Australia is yet to be determined.” Lowe reiterated “we will be closely monitoring how things evolve over coming months”. And, “the Board is prepared to adjust interest rates again if needed”.

Earlier today, RBA lowered the cash rate for a second consecutive month, by -25bps to 1.00%. Here are some suggested readings.

AUD/USD recovered ahead of 0.6941 support but stays below 0.7034 temporary top. Intraday bias remains neutral first and outlook is unchanged. We’re still viewing the rebound from 0.6831 as a correction. And, upside should be limited by 0.7022 resistance. On the downside, break of 0.6941 minor support will turn bias back to the downside for retesting 0.6831 low. However, firm break of 0.7022 will indicate near term bullish reversal and turn outlook bullish for 0.7205 resistance next. 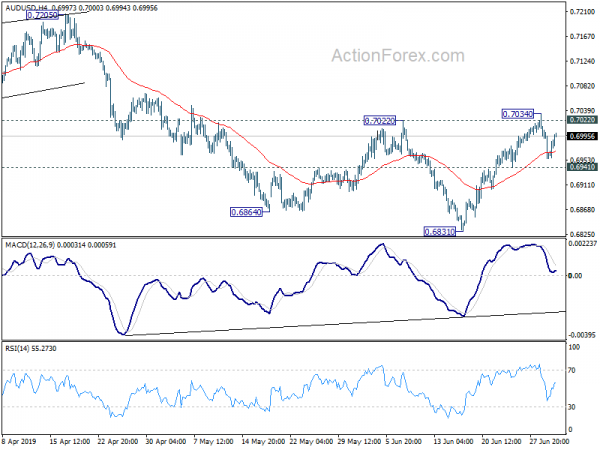 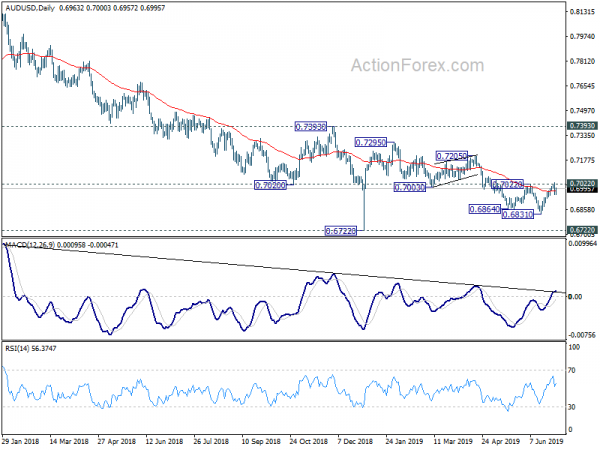