After initial selloff, Euro quickly rebounds as ECB Mario Draghi’s press conference is not as dovish as the statement suggests. September ECB decision could be live, depending on upcoming economic projections. For now, Euro is the strongest one for today, followed by Sterling. Dollar is the third strongest, supported by strong durable goods data. New Zealand and Australian Dollar are the weakest.

Technically, EUR/USD breached 1.1107 low to 1.1101 but rebounds strongly. A short term bottom is likely formed and stronger rise would be seen back to 1.1193/1282 resistance zone. USD/JPY finally breaks 108.37 resistance, which suggests resumption of rebound from 106.78. But that’s more due to weakness in Yen, as reaction to ECB and US data, rather than strength of Dollar.

ECB keeps monetary policy unchanged as widely expected. Main refinancing rate is kept at 0.00%. Marginal lending facility and deposit facility rates are held at 0.25% and -0.40% respectively. Forward guidance is changed to reflect the possibility of lower interest rates. That is, interest rates are expected to “remain at their present or lower levels at least through the first half of 2020”. Also ECB “stands ready to adjust all of it instruments” if “medium-term inflation outlook continues to fall short of its aim”. The statement clearly include the “possibility of lower interest rates”, opening the door for rate cut ahead.

However, President Mario Draghi is not as dovish in the press conference. Most importantly, there was no discussion on rate cuts today. Additionally, no unanimity was achieved among policy makers regarding the next move, just “convergence” of views. The comments argue that there is a lack of urgency for any action. And, September’s decision could be live, depending on upcoming economic projections.

On the economy, Draghi said slower growth outlook “mainly reflects the ongoing weakness in international trade in an environment of prolonged global uncertainties, which are particularly affecting the euro area manufacturing sector.”On the other hand, “activity levels in the services and construction sectors are resilient and the labor market is still improving.”

Nevertheless, risks “remain tilted to the downside, reflecting the prolonged presence of uncertainties related to geopolitical factors, the rising threat of protectionism, and vulnerabilities in emerging markets.” Incoming data continue to point to “somewhat slower growth” in Q2 and Q3.

“Inflationary pressures remain muted and indicators of inflation expectations have declined.” But, over the medium term,”underlying inflation is expected to increase, supported by our monetary policy measures, the ongoing economic expansion, and stronger wage growth.”

Clemens Fuest, President of the ifo Institute, said “the mood in German C suites is growing uneasy… Companies were less satisfied with their current business situation and are also looking ahead with increased skepticism. The German economy is navigating troubled waters.”

Manufacturing index was in “freefall” and dropped from 1.3 to -4.3. “Such a major decline was last seen in February 2009” and, “no improvement is expected in the short term, as businesses are looking ahead to the next six months with more pessimism.” Services Sector index dropped from 20.3 to 17.7, with expectations slightly pessimistic for the first time since July 2009. Trade index “slid sharply” from 7.9 to 1.4. “Companies are assessing their current situation as considerably less positive, and their outlook for the coming months is markedly more skeptical.” Construction Index dropped rose from 23.0 to 23.3.

China MOFCOM: Some Chinese firms willing to continue to buy US farm products

Chinese Ministry of Commerce spokesman Geo Feng confirmed that next round of US-China trade negotiation will happen in Shanghai for two days on July 30-31.

It’s reported that China has already agreed on unspecified purchases of US agricultural production. Gao said in a regular press conference that “Some Chinese firms are willing to continue to buy some U.S. agricultural goods, and they have asked for prices from their U.S. suppliers and will sign commercial contracts soon.”

But Gao also clarified that the purchases will be decided by companies themselves according to market functioning. Such purchases bear no direct relationship to restart of trade talks.

In a speech delivered today, RBA Governor Philip Lowe reiterated the dovish stance that, “the Board is prepared to provide additional support by easing monetary policy further.” At the same time, “whether or not further monetary easing is needed, it is reasonable to expect an extended period of low interest rates.”

Lowe also noted, “on current projections, it will be some time before inflation is comfortably back within the target range”. And, it’s “highly unlikely that we will be contemplating higher interest rates until we are confident that inflation will return to around the midpoint of the target range.”

He also defended current inflation target a said it has “stood the test of time”. He warned that lowering the target could “hardly seems a good way to build long-term credibility”. ” Lowe said. “Shifting the goal posts could also entrench a low inflation mindset.” Thus, “this brings me back to the question: is inflation targeting still appropriate? The short answer is yes.” And, ” the evidence does not support the idea that a change to our inflation target would deliver better economic outcomes than achieved by our current flexible inflation target,” he noted.

After dipping to 1.1101, EUR/USD drew support from 1.1107 low and recovered. With break of 1.1158 minor resistance, intraday bias is turned neutral first. Stronger recovery could be seen. But for now, break of 1.1282 resistance is needed to confirm completion of fall from 1.1412. Otherwise, another decline will remain mildly in favor. Though, firm break of 1.1282 will bring stronger rise to 1.1412 resistance. 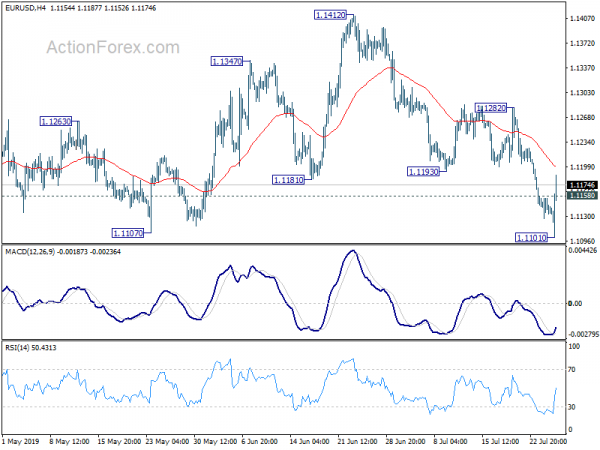 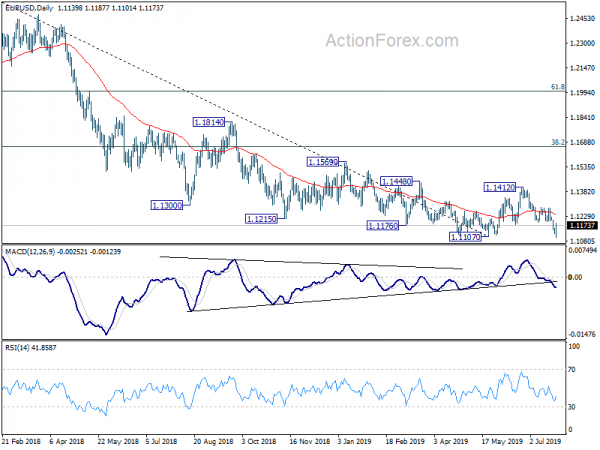