Dollar turns mixed in Asian session today but remains the strongest one for the week. Recent economic data from US, including yesterday’s durable goods orders, have been solid, and raised some doubts on the need for Fed easing. Sterling is currently the second strongest for the week, followed by Euro. The common currency was lifted yesterday as ECB President Mario Draghi sounded less dovish than expected in the post meeting press conference. But the central is still generally expected to ease policy in September. For now, Australian and New Zealand Dollars are the weakest ones.

Technically, USD/CHF’s breach of 0.9908 minor resistance suggests that pull back from 0.9951 has completed at 0.9803. Rebound from 0.9695 would probably extend through 0.9951 resistance. That’s another indication in Dollar strength, in line with outlook in USD/JPY, USD/CAD and AUD/USD. However, EUR/USD and GBP/USD are both drawing support from key level of 1.1107 and 1.2391. Whether Dollar can push through these two key resistance levels is important to determine the underlying momentum.

China’s Assistance Commerce Minister Ren Hongbin said that US companies are keen to participate in the second China International Import Expo (CIIE), to be held on Nov. 5-10 in Shanghai. He expects the number of US participants to exceed last year’s. He added, “for the United States, even through there are some bilateral trade frictions, it cannot stop U.S. firms from attaching importance to the Chinese market and their great enthusiasm for the Chinese market.”

Vice Commerce Minister Wang Bingnan also said China will further lower import tariffs and open up its market to foreign firms. He added, “the purpose of our holding of the import expo is not simply expanding imports, but putting more emphasis on improving import structures while keeping export growth steady.”

Separately, US trade delegation, led by Trade Representative Robert Lighthizer and Treasury Secretary Steven Mnuchin, will arrive in Shanghai next week, for the first face-to-face meeting since Trump-Xi summit in Japan.

Kyodo news reported that, as trade frictions intensified, Japan is going to remove South Korea from the white list of countries that gives the latter preferential treatment in trade. The announcement could be made as soon as on August 2, and change could take effect after 21 days.

Japan is reported to have cited “significantly undermined” trust between the two countries and “certain issues” with South Korea’s export controls and regulations. After the move, products and technology that could be diverted to military use would need to obtain approval from Ministry of Economy before exporting to South Korea.

Asked about the plan, Chief Cabinet Secretary Yoshihide Suga told a news conference that nothing had been decided on the time frame. There are currently 27 countries on Japan’s white list including the United States, Britain, Germany, Australia, New Zealand and Argentina.

Yesterday, ECB kept monetary policy unchanged as widely expected. Main refinancing rate was kept at 0.00%. Marginal lending facility and deposit facility rates are held at 0.25% and -0.40% respectively. ECB “stands ready to adjust all of it instruments” if “medium-term inflation outlook continues to fall short of its aim”. The statement clearly include the “possibility of lower interest rates”, opening the door for rate cut ahead.

However, President Mario Draghi was not as dovish in the press conference. Most importantly, there was no discussion on rate cuts in yesterday’s meeting. Additionally, no unanimity was achieved among policy makers regarding the next move, just “convergence” of views. The comments raised some doubts on whether ECB would act in September.

Still, we’d reiterate our expectations that, in September, ECB would announce an easing package, including forward guidance enhancement, rate cut with tiering system and QE. ECB would cut the deposit rate by -20 bps from the current -0.4%, along with a tiering system. It could as the same time announce resumption of QE for 12 months initially, with corporate bonds and sovereign debt included the purchase program.

Japan Tokyo CPI core was unchanged at 0.9% yoy in July, above expectation of 0.8% yoy. Germany import price will be released in European session. But main focus will be on US Q2 GDP in US session. 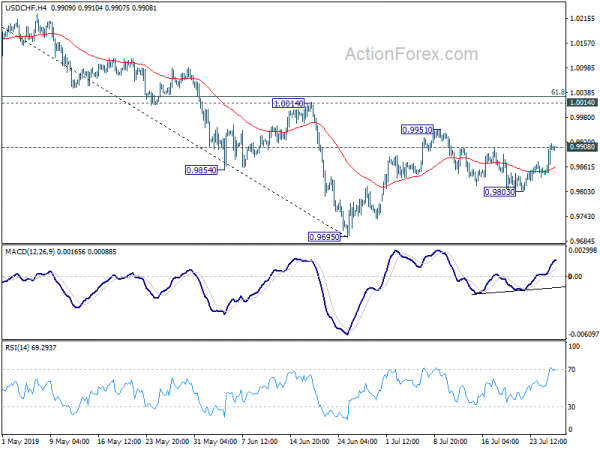 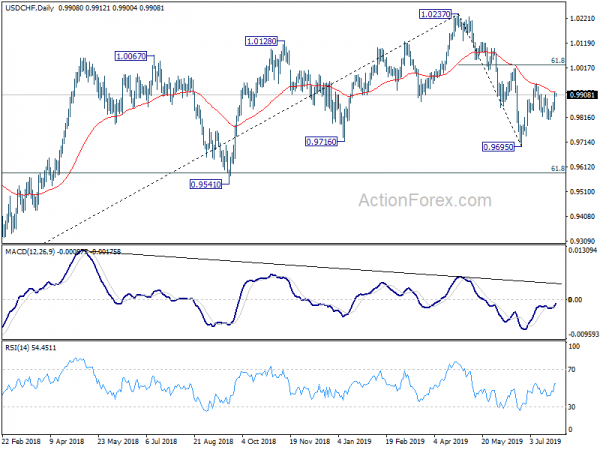