China’s PBoC said that the country’s foreign currency reserves dropped to USD 3.104T in July, down from USD 3.119T. The modest decline suggested that PBoC has refrained from selling foreign exchange directly for currency intervention. And according to economists, China’s capital inflows and outflows are roughly balanced. Thus, there is little need for PBoC to buy of sell foreign currencies.

RBNZ surprised the market by reducing the OCR, by -50 bps, to 1%. The market had only anticipated a -25 bps cut. The aggressive rate cut is “necessary” to help support employment and inflation in the country as downside risks are growing. Governor Orr also signaled that negative interests are possible as the central bank seeks to boost inflation and the job market. New Zealand dollar slumped as the decision came in much more dovish than expected. We expect further reduction in coming months.

More rate cuts are expected after the aggressive reduction today. At the press conference, Governor Orr signaled that the easing cycle has just started. As he suggested, “it is easily within the realms of possibility that we might have to do negative interest rates”. He added that “probably the single biggest challenge to us is just how low global nominal interest rates are”.

According to Summary of Opinions of July 29-30 BoJ meeting, some policymakers were clearly concerned with risks to economic outlook. And there were calls for discussions on ideas of ramping up monetary stimulus. Some economists took that as a signal that BoJ could deploy pre-emptive easing measures as soon as at the meeting next month.

In the summary, one member warned that “the BOJ must communicate more clearly its resolve to take additional monetary easing steps without hesitation if the momentum to achieve its price target is under threat”. And, “we must also consider in advance what steps we can take if we were to ease.”

Another member urged to use both interest rates and forward guidance to ease policy further. But there was also voice regarding the need to “assess the benefits and demerits of various monetary easing steps”.

USD/JPY weakens today but stays above 105.52 temporary low. Intraday bias remains neutral first and more consolidation could be seen. But upside should be limited well below 109.31 resistance to bring fall resumption. On the downside, break of 105.52 will target 104.69 low next. 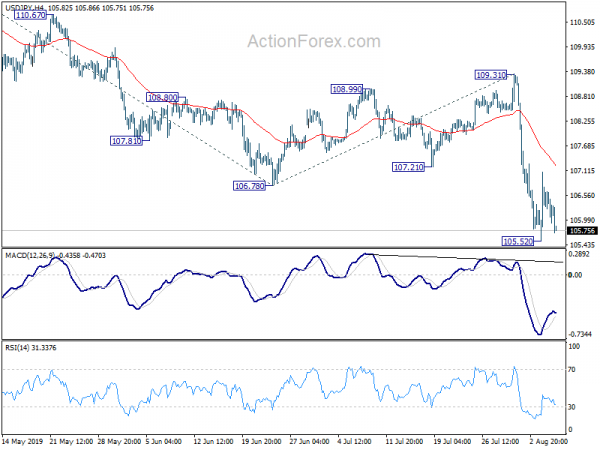 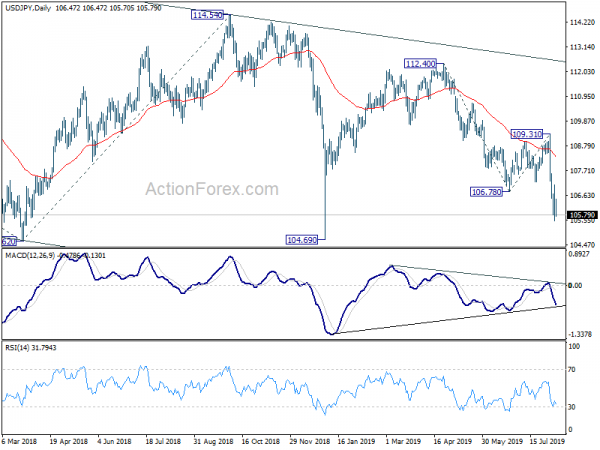