Sterling stays soft in Asian session and remain the second worst performing one for the week. Risk of no-deal Brexit continues to weigh on the Pound. UK GDP and production data could add more selling pressure. For the week, New Zealand Dollar remains the weakest one after the surprised 50bps rate cut by RBNZ earlier. Swiss Franc is currently the strongest for the week, followed by Euro and the Yen. While stocks and yield stabilized somewhat after this week’s steep decline, sentiments remain generally cautious on increasing tensions between US and China.

Technically, Sterling pairs will be a major focus in European session. GBP/USD is still holding on to 1.2079 temporary low. But weak recovery so far favors decline resumption. Similarly, GBP/JPY is also holding above 128.11 temporary low but downside breakout looks imminent. EUR/GBP is extending recent rise, with weaker upside momentum. But as long as 0.9088 support holds, it’s still on tract to 0.9305 resistance next. EUR/CHF turns softer after failing to break through 4 hour 55 EMA. Break of 1.0863 will resume recent decline and could prompt more broad based selling in Euro.

In the “Opening Statement to the House of Representatives Standing Committee on Economics“, RBA Governor Philip Lowe said “there are signs the economy may have reached a gentle turning point”. The economic outlook is supported by lower interest rates, tax cuts, weaker exchange rate, stabilization of housing markets, improvement in resources sector and infrastructure spending. Thus, “consistent with this, we are expecting the quarterly GDP growth outcomes to strengthen gradually after a run of disappointing numbers,” Lowe said.

Though, for now, Lowe reiterated that “It is reasonable to expect an extended period of low rates will be needed to achieve the Board’s employment and inflation objectives,.” And, at the Q&A session, Lowe also noted that “it’s possible we end up at the zero lower bound” on interest rates. He added “it’s unlikely but it is possible” and RBA is “prepared to do unconventional things if circumstances warranted.”.

The set of data argues that uncertainty from global trade war has relatively controlled impacts on the economy. In particular, companies were not prompted to rein in investment spending. This echoed BoJ’s assessment that global uncertainties had so far limited impact on the Japanese economy. Though, domestic demand would weaken ahead later in the year due to the planned sales tax hike. That’s something BoJ policymakers need to continue to monitor.

UK Foreign Minister Dominic Raab warned in a Reuters interview that it’s EU’s call on no-deal Brexit. And, it’s EU’s responsibility to take if that happens. He also reiterated that UK will leave at the end of October “preferably with a deal”. But, if “there’s no movement or flexibility from the EU side, then we’ll leave on what’s called WTO terms.”

Raab said, “If the position from the EU is that the withdrawal agreement can’t be changed – whether it’s add-ons or subtractions – full stop, which is their position today, then let’s face it, they will be taking the decision to see the UK leave on no-deal terms, and that’s a responsibility they will have to bear.”

He also reiterated the new government’s stance that “the backstop, certainly in its current form, is undemocratic and it’s something that will have to be removed.” The alternative is to move toward an “operational backstop” that ensured that “any checks that are done wouldn’t be at the border” but could be managed with “technology and goodwill and operational cooperation.”

GBP/JPY is staying in consolidation from 128.11 temporary low and intraday bias remains neutral first. Another recovery cannot be ruled out. But upside should be limited below 133.85 support turned resistance to bring fall resumption. On the downside, break of 128.11 will extend the decline from 148.84 to 122.36 low next. 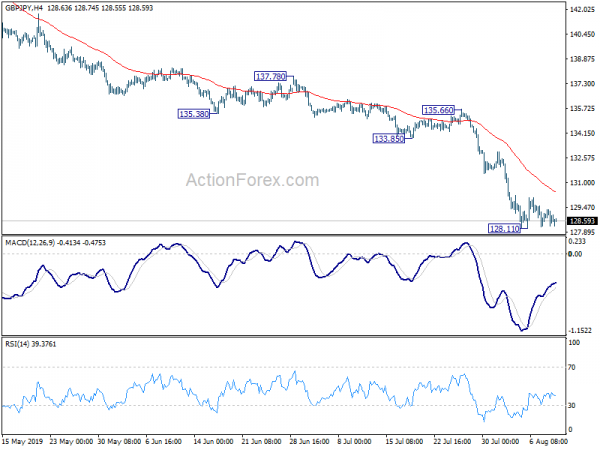 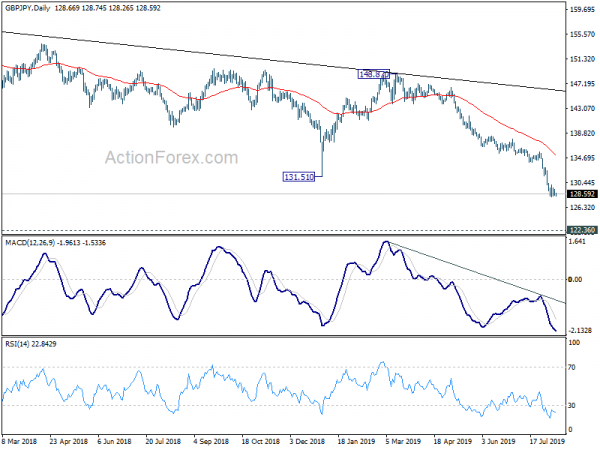