The forex markets are rather calm so far despite deep risk aversion elsewhere. Most notably, US 30-year yield plunged sharply by -0.118 to 2.130, closing in to 2.102 historical low. Major Asia indices are all in red, following selloff in US overnight. Nevertheless, all major forex pairs and crosses are just stuck in yesterday’s range. Indeed, Yen and Franc weaken mildly while commodity currencies recover as led by Australian Dollar.

Technically, USD/CHF breached 0.9695 key support but quickly recovered again. EUR/CHF also struggled to break through 1.0863 temporary low. There is prospect of a pull back in the Swiss Franc, should sentiments stabilize or SNB step intervention. In case of deeper risk aversion moves, Yen could be in an upper hand, with USD/JPY and GBP/JPY clearly staying in downward trajectory, while EUR/JPY is soft. Sterling could be a focus today with job data featured. In any case, we won’t be too convinced of any rebound in the Pound unless 0.9198 minor support in EUR/GBP is taken out.

RBA’s Assistant Governor Christopher Kent said the transmission of monetary policy in Australia to financial conditions is “working in the usual way”. Change in RBA’s policy stance has underpinned the decline in risk-free rates along the yield curve. It has also contributed to a decline in the cost of funding in corporate bond markets, supported equity prices, and lowered the cost of funding for banks. Much of the reduction in banks’ funding costs has been passed through to business and household borrowers. Also, decline in interest rates has contributed to the depreciation of the Australian dollar.

On the exchange rate, Kent noted Australian dollar had depreciated over that period when commodity prices had been rising. And, that implies the effect of monetary policy on exchange rate has been “broadly working as usual”. He also pointed to noticeable decline in Australian interest rates relative to those of major advanced economies. And, “this lower return on Australian assets would no doubt have contributed to a decline in the value of the Australian dollar.”

Alan Oster, NAB Group Chief Economist said “the decline in business conditions since early 2018 has been broad-based and has continued to track at below average levels in recent months.” And, “this is concerning, because while conditions remain positive, it points to a significant loss in momentum in the business sector”.

Business confidence “ticked-up” but is “also below average”. While there were some positive signs with a post-election lift in confidence, this bounce now looks to have been short lived with confidence also tracking at below average levels in the two months since the election”

And, “with a significant loss of momentum in activity, and inflation indicators remaining weak, the survey points to the need to the need for further stimulus in the economy. Indeed, we expect a further easing in interest rates from the RBA and think that some greater fiscal support will be needed from the government to kickstart growth”.

Singapore Ministry of Trade and Industry downgraded 2019 growth forecast to 0.0-1.0%, and expect growth to come in at around mid-point of the forecast range. That’s notably lower from prior estimate of 1.5-2.5%, after Q2 GDP contracted by -3.3%. The Ministry noted in the statement that “GDP growth in many of Singapore’s key final demand markets in the second half of 2019 is expected to slow from, or remain similar to, that recorded in the first half.”.

Also, “uncertainties and downside risks in the global economy have increased since three months ago”. The risks firstly include US new tariffs on USD 300B in Chinese imports. Secondly, a “a steeper-than-expected slowdown” of China, as precipitated by US tariffs, could lead to a “sharp fall” in Chinese import demands and “negatively affect the region’s growth”. Thirdly, risk of no-deal Brexit “has increased with the recent change in UK’s political leadership.” Fourthly, there are risks from uncertainties in Hong Kong, the trade dispute between Japan and South Korea, as well as geopolitical tensions in North Korea and the Strait of Hormuz.

UK employment data will be the major focus in European session, along with German ZEW economic sentiment. Later in the day, US CPI will take center stage.

Despite diminishing upside momentum as seen in 4 hour MACD, intraday bias in EUR/GBP remains on the upside with 0.9198 minor support intact. Larger up trend is likely resuming and next near term target is 100% projection of 0.8489 to 0.9051 from 0.8891 at 0.9453. On the downside, though, break of 0.9198 minor support will indicate short term topping and bring lengthier consolidations first. 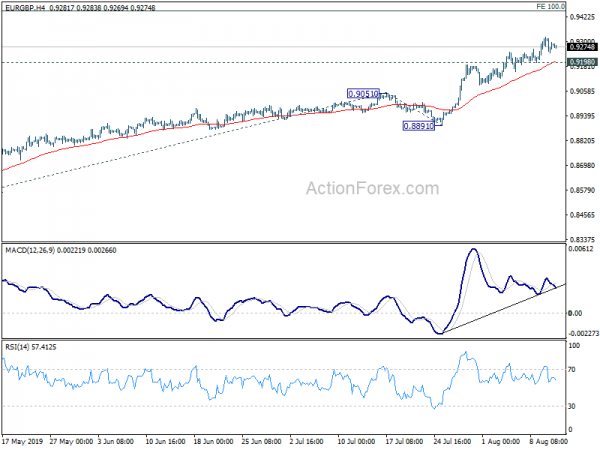 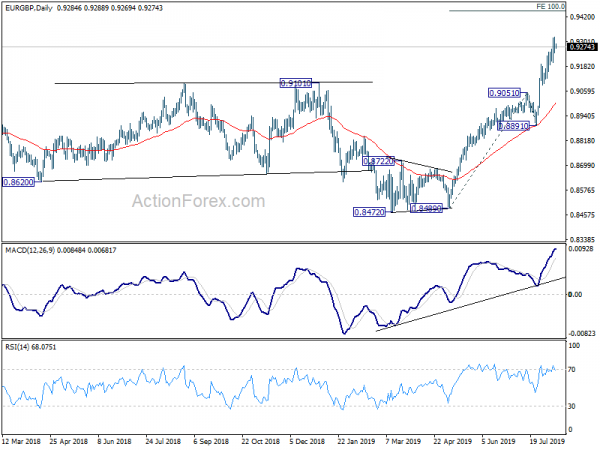