Sterling rebounds strongly after German Chancellor Angela Merkel expressed her optimism that Irish border backstop solution could be achieved before Brexit date. The Pound is currently the strongest one, followed by Canadian Dollar. On the other hand, cautious risk sentiments keep Australian and New Zealand Dollar as the weakest. Euro is mixed as better than expected PMIs didn’t offer optimism on economic outlook.

Technically, GBP/USD’s break of 1.2209 and GBP/JPY’s break of 130.06 suggests short term bottoming in both pairs. Stronger rebound should be seen in near term. But these rebounds are viewed as extended corrective move. We’ll assess the structure to confirm this view later. Similarly, EUR/GBP is set to enter key near term support zone of 0.8891/9051. We’d look for bottoming there.

Sterling is given a lift after German Chancellor Angela Merkel hinted that the Irish border solution could be achieved within 30 days to avoid no-deal Brexit.

Merkel denied that she’s set a 30-day deadline for UK Prime Minister Boris Johnson to find a solution to remove the Irish backstop from the withdrawal agreement.

Though, she clarified that what one can achieve in three or two years can also be achieved in 30 days. Better said, one must say that one can also achieve it by October 31.”

Kansas City Fed President Esther George, who dissented the rate cut at July FOMC meeting, repeated her stance that the rate cut “wasn’t required”. She told CNBC that  “with this very low unemployment rate, with wages rising, with the inflation rate staying close to the Fed’s target, I think we’re in a good place relative to the mandates that we’re asked to achieve.”

Though, she admitted that risks are tilted to the downside. She noted, “as you look at global growth weakening and as you look at the amount of uncertainty associated with some of these trade issues, I think both of those are weighing on the outlook. Whether they spill over in a way that we see in the real economy is what I’m watching for.”

Separately, she told Bloomberg TV that “We’re at a sort of equilibrium right now and I’d be happy to leave rates here absent seeing either some weakness or some strengthening, some kind of upside risk that would cause me to think rates should be somewhere else.”

Accounts of the July 24-25 ECB policy meeting showed that members “broadly supported the reintroduction of an easing bias” to the forward guidance. That came in light of “weakness of the economic outlook and the muted inflation developments”.

For further easing, “the view was expressed that the various options should be seen as a package, i.e. a combination of instruments with significant complementarities and synergies”. That’s because “experience had shown that a policy package – such as the combination of rate cuts and asset purchases – was more effective than a sequence of selective actions.”

Andrew Harker, Associate Director at IHS Markit said: “The dynamics of the eurozone economy were little changed in August, with solid growth in services continuing to hold the wider economy’s head above water despite ongoing manufacturing decline. While the rate of overall expansion ticked up, we’re still looking at GDP only rising by between 0.1% and 0.2%, based on the PMI data for the third quarter so far.”

Phil Smith, Principal Economist at IHS Markit said: “Germany remains a two-speed economy, with ongoing growth of services just about compensating for the sustained weakness in manufacturing. Although improving slightly, the survey’s output data haven’t changed enough to dispel the threat of another slight contraction in GDP in the third quarter, especially given the deterioration in the forward-looking indicators.”

Eliot Kerr, Economist at IHS Markit said: “French private sector businesses posted another solid increase in output during August. Service sector expansion continued to surpass manufacturing growth, reflecting the broader trend seen across the eurozone in recent months. “However, in contrast to its peers, economic growth in France has remained solid and the latest set of PMI figures only add weight to the argument that this outperformance is likely to continue in the third quarter.”

Japan Motegi: Gaps to be filled in US trade talks

Japanese Economy Minister Toshimitsu Motegi met US Trade Representative Robert Lighthizer on trade in Washington yesterday. After the meeting, he noted that talks have been “narrowed down quite a bit”, discussions are “deepening”. But there are still “gaps” to be filled.

Motegi said: “Issues that need to be sorted out in ministerial-level talks have been narrowed down quite a bit… We agreed to speed up discussions and work on the remaining issues for an early achievement of results… Discussions are undoubtedly deepening. But there are still gaps that need to be filled.”

Discussions will continue today after working level talks between the two sides. The teams are aiming to lay the groundwork for a possible meeting between Japanese Prime Minister Shinzo Abe and US President Donald Trump, to be held on the sidelines of this weekend’s G7 summit in France.

Joe Hayes, Economists at IHS Markit noted: “Preliminary August PMI data give plenty of promise that the solid growth trend seen in the GDP outturns so far this year could indeed stretch into the third quarter, providing a timely boost before the fourth quarter, which is likely to be adversely impacted by the consequences of sales tax hike”.

“The driving force behind this remains the service sector, which is lifted by resilient demand within the domestic economy. Flash data showed services activity growing at the fastest rate in almost two years in August, allaying fears, at least for the time being, that strong external headwinds being felt within manufacturing could spread to other parts of the economy.”

Australia PMI shift back into contraction, not immune to global risks

In August, Australia CBA PMI Manufacturing dropped from 51.6 to 51.3. CBA PMI Services dropped from 52.3 to 49.2. PMI Output dropped from 52.1 to 49.5. The set of data signalled the first reduction in output since March, centering on the service sector. CBA noted that “currency weakness led to a faster rise in manufacturing input prices, but services costs increased at a weaker pace, as did output prices across both monitored sectors.”

CBA Chief Economist, Michael Blythe said: “A persistent concern is that the fallout from the US-China trade war will dent global capex and consumer spending as cautious businesses and households retreat to the sidelines. The shift back into contractionary territory in the CBA Flash PMI reading for August indicates that Australia is not immune to these global risks….”The challenges faced by the RBA in their attempts to return inflation to the 2-3% target band are also highlighted in the survey. The lower Aussie dollar is putting upward pressure on input prices. But the competitive trading environment is limiting the flow through to output prices.” 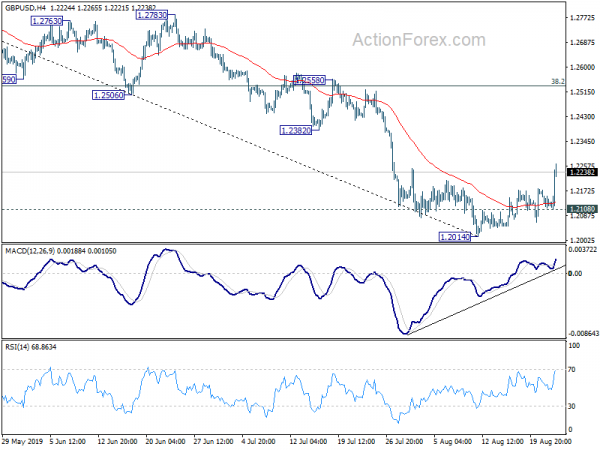 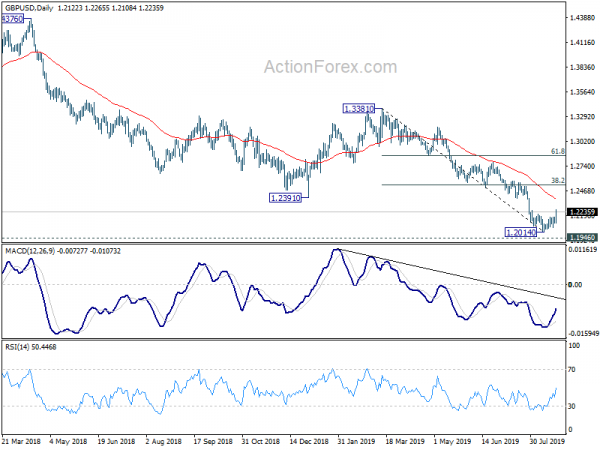