Stock markets stage a strong rebound today after China appears to be backing down from its hard line stance in trade war with US. Yen and Swiss Franc turn soft while commodity currency regain reverse earlier losses. Euro is also weak despite improvement in confidence indicators. Sterling remains mixed as markets await political development in UK. Dollar is also mixed, shrugging of weak recovery in US treasury yields.

Technically, major crosses and pairs are staying in range trading in general. Even the relatively weaker EUR/USD is holding above 1.1051 temporary low. Though, break of this support will be an early indication of Dollar strength and a test on 1.1206 low would be seen. Also, USD/JPY recovers today but stays below 106.73 minor resistance. But break of 106.73 will be an indication of short term bottoming and bring stronger rebound.

China’s Ministry of Commerce spokesman Gao Feng said today that “China has ample means for retaliation, but thinks the question that should be discussed now is about removing the new tariffs to prevent escalation of the trade war.” And, “China is lodging solemn representations with the U.S. on the matter.”

Additionally, Gao reiterated the usual rhetoric that “escalation of the trade war won’t benefit China, nor the US, nor the world,” and “the most important thing is to create the necessary conditions for continuing negotiations.” He also repeated Vice Premier Liu He’s comment that China is “willing to solve the problem through consultation and cooperation with a calm attitude, but firmly opposes escalation of trade war.”

The comments suggested that China is backing down from its hard-line stance after recent escalation by US President Donald Trump. Trump tweeted earlier this month that 25% tariffs on some USD 250B in imports from China would rise to 30% come Oct. 1. He also lifted planned levies on USD 300B in Chinese goods due on Sept. 1 and Dec. 15 by 5%.

According to the second estimate, US GDP grew 2.0% annualized in Q2, unrevised from first estimate, down from Q1’s 3.1%. The deceleration in real GDP in the Q2 primarily reflected downturns in inventory investment, exports, and nonresidential fixed investment. These downturns were partly offset by accelerations in PCE and federal government spending. The PCE price index increased 2.3%, compared with Q1’s 0.4%. Excluding food and energy prices, the PCE price index increased 1.7%, Q1’s 1.1%.

Eurozone Economic Sentiment improved to 103.1 in August, up from 102.7 and beat expectation of 102.3. The slight improvement of euro-area sentiment resulted from markedly higher confidence in industry and retail trade, while confidence deteriorated significantly in services and construction and, to a lesser extent, among consumers.

Business Climate Indicator rose 0.22 to 0.11. Managers’ assessments of past production and of export order books improved sharply. Also their production expectations, as well as their views on overall order books and the level of stocks of finished products improved markedly.

UK Rees-Mogg: Change the government or the law, or Brexit will happen on Oct 31

UK Leader of Commons Jacob Rees-Mogg challenged other MPs to collapse the government if they can, as criticism over Prime Minister Johnson’s move to suspend the parliament grew. Rees-Mogg told BBC, “All these people who are wailing and gnashing of teeth know that there are two ways of doing what they want to do… One, is to change the government and the other is to change the law. If they do either of those that will then have an effect… If they don’t have either the courage or the gumption to do either of those then we will leave on the 31st of October in accordance with the referendum result.”

Some EU ministers sang a chorus against no-deal Brexit today as risks grow. Dutch Foreign Minister Stephan Blok said “it’s in nobody’s interest to see a no-deal Brexit,” and, “we still hope it will be possible to avoid a no-deal Brexit and we are looking forward to any proposals from the British government that fit into the Withdrawal Agreement”. Austria’s Alexander Schallenberg said “I fear so, yes,” that a no-de Brexit is more likely. But he also reiterated EU’s stance that “the ball is in the UK’s court… We have done whatever is possible to ensure an orderly exit of Britain.” Finnish Foreign Minister Pekka Haavisto said: “To support Brexit with the deal is a key issue because otherwise we will face a lot of negative consequences to our economies and our border traffic.”

New Zealand ANZ Business Confidence dropped sharply from -44.3 to -52.3 in August. Activity Outlook also turned negative again, down from 5.0 to -0.5. ANZ noted that “employment, investment and export intentions all fell to dismal levels, along with profit expectations.” Also, “inflation indicators were weaker despite higher reported costs.”

Just over a third of this month’s survey responses were received after the surprised RBNZ -50bps OCR cut. ANZ noted “there were small differences in the responses before and after” and “none of the differences were statistically significant for any of the data series.” ANZ further said “the outlook for the economy appears to be deteriorating further, with firms extremely downbeat despite easier monetary conditions, fairly robust commodity prices, and positive population growth. Whatever the cause, the risk is rising that it becomes self-fulfilling.” 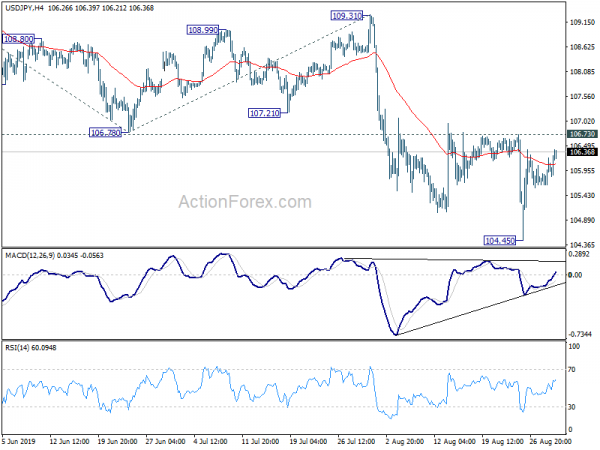 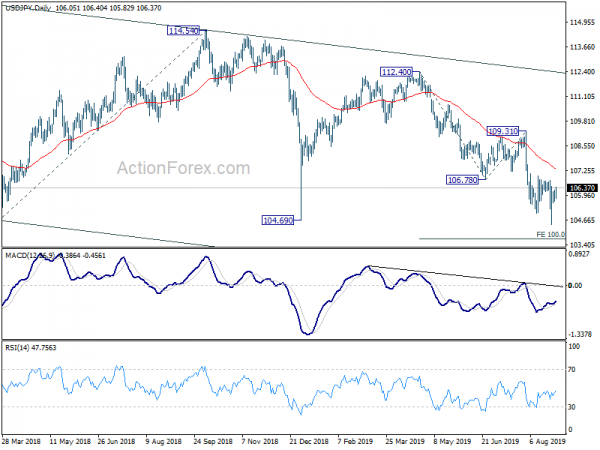