Dollar and Yen firm up mildly in Asian session as markets started the month mixed. New round of US-China tariffs took effect over the weekend but market reactions are muted so far. Australian Dollar softens mildly, followed by Swiss Franc and then Sterling. But overall, major forex pairs and crosses bounded inside Friday’s range. A major focus will be on EUR/USD, which extended medium term down trend late last week.

Technically, EUR/USD broke 1.1026 last week as down trend from 1.2555 resumed. Further fall would now be seen to 1.0683 projection level next. There are a couple of levels to watch to affirm Dollar’s underlying momentum. Those include 0.9975 resistance in USD/CHF, 1.3345 resistance in USD/CAD and 0.6677 support in AUD/USD. 106.73 resistance in USD/JPY is also a level to watch. But it’s relatively less likely to be taken out based on broad based resilience in Yen.

New 15% tariffs on more than USD 125B in Chinese imports took effect over the weekend, while the levies on the rest of USD 300B are still on track for December 15. China also started retaliation on the USD 75B in American goods. At the same time, US President Donald Trump indicated on Sunday that talks are still planned for September. He noted, “we are talking to China, the meetings in September, that hasn’t changed.”

On the other hand, Chinese state media repeated its hard line messages. The official Xinhua news agency warned “the United States should learn how to behave like a responsible global power and stop acting as a ‘school bully’.” The People’s Daily also emphasized “China’s booming economy has made China a fertile ground for investment that foreign companies cannot ignore.”

China Caixin PMI Manufacturing rose to 50.4 in August, up from 49.9 and beat expectation of 49.8. Caixin note marginal expansion of output. New orders were broadly stable despite further decline in export sales. However, output charges fell at quickest rate since December 2015.

Zhengsheng Zhong, Director of Macroeconomic Analysis at CEBM Group said: “China’s manufacturing sector showed a recovery in August, mainly due to improved production activity. However, overall demand didn’t improve, and foreign demand declined notably, leading product inventories to grow. There was no sign of an improvement in companies’ willingness to replenish inventories of inputs or in their confidence. Industrial prices trended down. China’s economy showed signs of a short-term recovery, but downward pressure remains a long-term problem. Amid unstable Sino-American relations, China needs to step up countercyclical policies.”

Japan PMI Manufacturing was finalized at 49.3 in August, revised down from 49.5, slightly down from July’s 49.3. Markit noted sluggish demand conditions persisted in August. Output continued to decline while business confidence was subdued. Also, firmed reduced output charges to stimulate sales.

Australia AiG Performance of Manufacturing Index rose to 53.1 in August, up from 51.3. AiG noted that “manufacturing conditions improved in August, with increasing levels of production and rising exports”. And “overseas demand for Australian manufactured products remains strong, particularly for consumable manufacturing products.”

The report noted that “manufacturing sector indicated contractionary sentiment for the first time since August 2012” while ANZ Business Confidence fell further. And, “continued general business pessimism has increased the downside risk for our near-term GDP growth forecasts, but there are tentative signs that the downward trend in confidence may have stabilised.”

RBA and BoC, US ISM and NFP to highlight a busy week

Two central banks will meet in a very busy week ahead. RBA is widely expected to stand pat and keep interest rate unchanged at 1.00%. After two consecutive rate cuts in June and July, recent rhetorics suggest that the board will opt for a wait-and-see approach first, before making another move later in the year. We’re note expecting any deviation from recent messages.

BoC is also expected to keep interest rate unchanged at 1.75%. US-China trade tensions escalated while global slowdown continued. But domestically, economic data have been relatively resilient so far. The question is on how policymakers are weighing the contrasting developments. The central bank’s current neutral bias might be at risk as BoC could start to lean more to the cautious or even dovish side.

Many heavy weigh economic data are featured too. US ISM indices and non-farm payrolls would be crucial on whether Fed would deliver another “mid-cycle” adjustment this month. UK PMIs will be watched while Brexit will continue to occupy headlines. In addition the RBA meeting, Australia will release retail sales, GDP and trade balance. Canada will also release employment data. Last but not least, China PMIs will also catch much attentions.

Intraday bias in EUR/USD remains on the downside for the moment. Current decline should target 100% projection of 1.1412 to 1.1026 from 1.1249 at 1.0683 next. On the upside, above 1.1049 minor resistance will turn intraday bias neutral and bring consolidations again first. But recovery should be limited well below 1.1249 resistance to bring fall resumption. 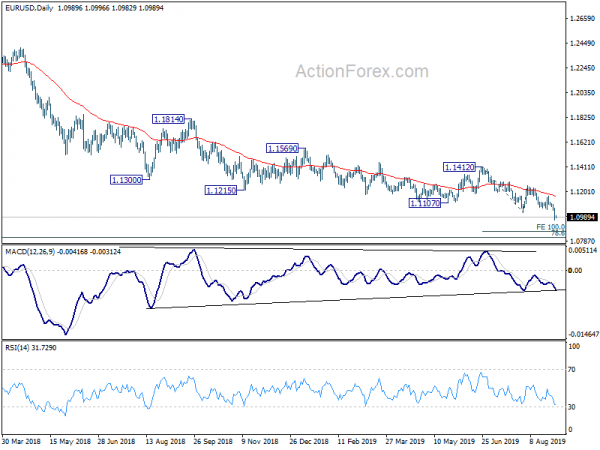