Focus Turning to Trade Talks after BoE, SNB and BoJ

Swiss Franc and Yen are trading as the strongest for today so far. Both like lifted by somewhat dovish yet balanced central bank decisions. There are no clear indication of imminent policy easing from SNB nor BoJ yet. On other hand, commodity currencies are generally lower as led by Australian, which is pressured by rise in unemployment rate. Sterling closely follows after BoE rate decision trigger little reactions.

Dollar is also slightly softer, following yesterday’s post FOMC rebound. If we purely look at Fed’s dot plot and projections, the mid-cycle adjustment should be completed after yesterday’s rate cut. But decisions would remain heavily dependent on upcoming developments. Focuses are quickly turning to the deputy-level US-China trade talks in Washington.

Chinese Vice Finance Minister Liao Min is leading a delegation of around 30 Chinese officials to meet with US Deputy Trade Representative Jeffrey Gerrish at the USTR office near White House today. It’s reported that the discussions will focus heavily on agricultural purchases, with some focuses on intellectual property protections and forced technology transfer.

US Commerce Secretary Wilbur Ross said today that “we will find out very, very shortly in the next couple of weeks” on what China exactly wants. But he emphasized that “what we need is to correct the big imbalances, not just the current trade deficit… It’s more complicated than just buying a few more soybeans.”

Philadelphia Fed Manufacturing Business Outlook Survey Current Index dropped from 16.8 to 12.0 in September, above expectation of 10.8. The survey’s indicators were mixed as the indexes for general activity and new orders fell, while the indexes for shipments and employment increased. Meanwhile, price indexes increased notably.

BoE kept bank rate unchanged at 0.75% and held asset purchase target at GBP 435B as widely expected. Both decisions were made by unanimous votes.

BoE also reiterated that “monetary policy response would not be automatic and could be in either direction.”. In case of smooth Brexit, “increases in interest rates, at a gradual pace and to a limited extent, would be appropriate”.

Irish Foreign Minister Simon Coveney emphasized that EU needs to get “credible proposal” on Irish backstop alternatives. But “we simply haven’t seen yet”, he added. He also said the meeting between Prime Minister Leo Varadkar and DUP’s Arlene Foster was “positive and friendly”. But he emphasized “it is important that its not interpreted as some sort of breakthrough, because I don’t think it is.”

Separately, a European Commission spokesperson said that there is not precise deadline for UK regarding Brexit proposals, but “every day counts”. She added, “we mentioned the European Council in October as a milestone in our calendar so in order to properly prepare a European Council the sooner we make progress the better, but I don’t have a precise date to give you”.

Swiss Franc notably after SNB left policy rate unchanged at -0.75%. The central bank reiterated the commitment to “intervene in the foreign exchange market as necessary, while taking the overall currency situation into consideration”. The so-called exemption threshold for negative interest rates was raised from 20 times of minimum reserve to 25 times. The overall announcement is seen as much less dovish than expected.

Also from Swiss, trade surplus narrowed to CHF 1.59B in August, below expectation of CHF 3.22B.

BoJ left monetary policy unchanged as widely expected. Under the yield curve control framework, short-term policy rate is kept at -0.1%. The central bank will continue JGB purchases to keep 10-year yield at around 0%. Annual monetary base expansion will be kept at around JPY 80T.

On the outlook, BoJ expects that the economy is “likely to continue on a moderate expanding trend, despite being affected by the slowdown in overseas economies”. Domestic demand is “expected to follow an uptrend”. Exports are “projected to show some weakness”, but still be on a “moderate increasing trend”. CPI is likely to increase “gradually toward 2 percent”.

Risks include US macroeconomic policies, protectionism, emerging markets, global adjustments in IT goods, Brexit and geopolitical risks. BoJ warned that “downside risks concerning overseas economies seem to be increasing, and it also is necessary to pay close attention to their impact on firms’ and households’ sentiment in Japan.”

USD/CHF drops sharply after failing to sustain above 0.9975 key resistance. But it’s holding above 0.9854 support. Intraday bias remains neutral first. On the upside, decisive break of 0.9975 will confirm completion of fall form 1.0237. Further rally would then be seen to retest this high. On the downside, though, break of 0.9854 will turn intraday bias to the downside for 0.9659 low. 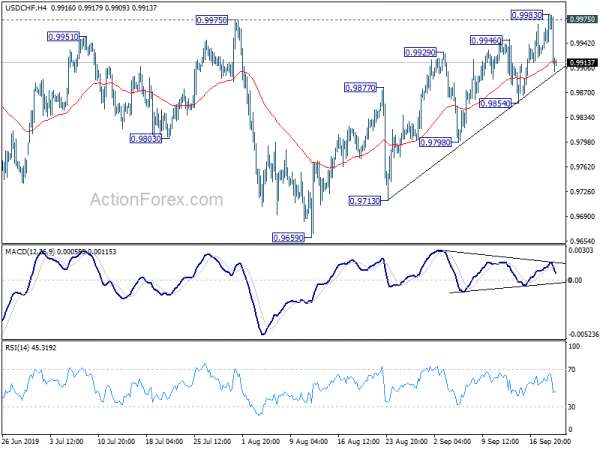 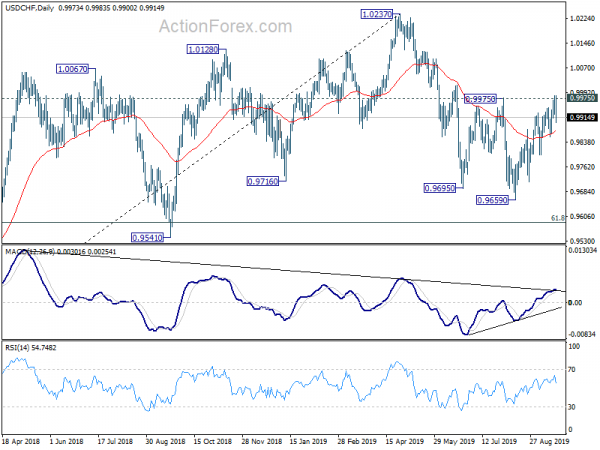