The forex markets remain in rather indecisive mode for now. Dollar buying attempted to take off yesterday, but quickly lost momentum. The greenback pares back some of yesterday’s gains in Asian session. Similarly, there was no follow through selling in Australian and New Zealand Dollar so far. Yen is firm against European majors, without taking out near term support levels. Consolidative trading might continue before weekly close.

Technically, after yesterday’s decline, EUR/USD is still holding above 1.0926 low. Outlook stays bearish in the pair but firm break of 1.0926 is needed to confirm down trend resumption. Or recent consolidations would extend. Recoveries in USD/CHF and USD/JPY dampened the near term bearish view. Focus are back on 0.9983 and 108.47 temporary top respectively. EUR/GBP is also staying in tight range. Break of 0.8894 minor resistance will confirm short term bottoming and bring stronger rebound.

US and Japan formally signed a “first-phase” trade agreement yesterday, covering US agricultural products as well as Japanese machine tools. The threat of auto tariffs should also be averted even though it’s not clearly written. US President Donald Trump expected the deal to open up Japanese markets to USD 7B in goods including beef, pork, wheat and cheese.

Japanese Prime Minister said at a press conference that “between President Trump and I, myself, this has been firmly confirmed that no further, additional tariffs will imposed”, referring to auto tariffs. And, “with the entry into force of our trade agreements, I believe both of our economies will be able to further grow and develop.”

US Trade Representative Robert Lighthizer indicated that issues of autos would be tackled in a later round of negotiations, expected to start next April.

Trump: China trade deal could happen sooner than you think

Trump indicated that US and China are “having some very good conversations” on trade. And China want to make deal “very badly” and “it could happen sooner than you think.” He added that’s “because they’re losing their jobs, because their supply chain is going to hell and companies are moving out of China and they’re moving to lots of other places, including the United States.” Additionally, China is “starting to buy our agricultural product again… starting to go with the beef and all of the different things, pork, very big on pork.”

The comments came just a day after Trump’s harsh criticism on China at the United Nations General Assembly. He said “not only has China declined to adopt promised reforms, it has embraced an economic model dependent on massive market barriers, heavy state subsidies, currency manipulation, product dumping, forced technology transfers and the theft of intellectual property and also trade secrets on a grand scale”. And, “as far as America is concerned, those days are over.”

US Pompeo announces new Iran-related sanctions on some Chinese entities

Yesterday, US Secretary of State Michael Pompeo announced new Iran-related sanctions on some Chinese entities. He said at conference that “we’re telling China and all nations, know that we will sanction every violation of sanctionable activity.” And, “the United States will intensify our efforts to educate countries and companies on the risk of doing business with IRGC entities and we will punish them if they persist in defiance of our warnings.”

Dallas Fed President Robert Kaplan said Fed officials are watching whether “decelerating global growth”, “weak manufacturing” and “weak business fixed investment” in the US would spreads through the rest of the economy. He added that if it spreads enough so that in six months there were a weak job report or two, “all of a sudden consumer confidence gets a little shaky, then you could have the start of a more severe downturn”.

And that’s why Fed lowered interest rate twice to a “little accommodative” level to support spending and investment and guard against a slowdown. He’s still comfortable that US is “not going to have a recession”, as long as consumers stay strong. At this point, Kaplan is “agnostic” about whether further rate cuts will be needed.

Chicago Fed President Charles Evans said that monetary policy is now “well-positioned” to wait-and-see how the economy respond to the two recent rate cuts. He also described the rate cuts as mid-cycle adjustments.

He maintained that the economy was “quite solid” even though there is a lot of uncertainty due to trade tensions. US is on a good growth path but not “outrageously” strong and it could continue “until something happens.

He also believed that solid economic fundamentals could go on indefinitely even though the shape of the yield curve was a concern.

EUR/USD recovers ahead of 1.0926 support and intraday bias remains neutral for the moment. Consolidation from 1.0926 could still extend. But in case of another rise, upside should be limited by 1.1164 resistance. On the downside, sustained break of 1.0926 will resume lager down trend from 1.2555 for 1.0813 fibonacci level next. However, decisive break of 1.1164 will be an early indication of larger reversal and target 1.1249 resistance. 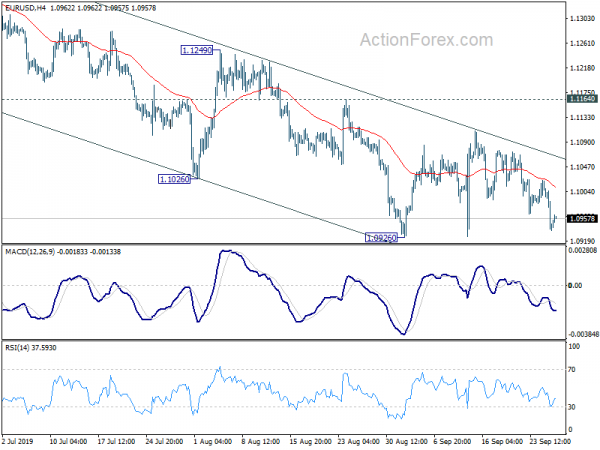 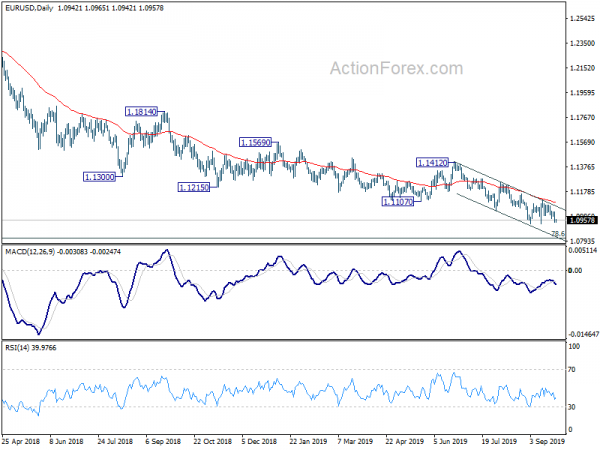