Forex traders remain rather uncommitted today. Euro was weighed down by renewed weakness in German 10-year bund yield, which hit as low as 0.594. The common currency hit new 2019 low against Dollar but there is no follow through selling. Australian Dollar also recovers notably after initial weakness. On the other hand, Dollar is turning softer again after another rally attempt. The economic data released today trigger no sustainable price actions.

US Q2 GDP growth was finalized at 2.0% annualized rate, unrevised. It’s down from Q1’s 3.1% annualized growth. Downward revisions to personal consumption expenditures (PCE) and nonresidential fixed investment were primarily offset by upward revisions to state and local government spending and exports. Imports, which are a subtraction in the calculation of GDP, were revised down.

The deceleration in real GDP in the second quarter primarily reflected downturns in inventory investment, exports, and nonresidential fixed investment. These downturns were partly offset by accelerations in PCE and federal government spending.

US initial jobless claims rose to 213k, slightly above expectation

Also from US, goods trade balance widened slightly to USD -72.8B in August, below expectation of USD -73.3B.

In the Monthly Economic Bulletin, ECB noted that Eurozone growth remained “moderate” in the first two quarters of the year. “Differences across countries becoming more noticeable” in Q2. Labor markets are still improving with recent data and survey-based indicators continue to point to “positive” employment growth, with “some further moderation”.

Gfk noted: “According to consumers, the risk of a recession still cannot be eliminated. The trade conflict with the US as well as the lack of clarity as to whether there will be a no-deal Brexit are above all affecting export-driven companies and their suppliers though are certainly impacting the rest of the economy as well.”

“Should the German economy shrink again following the decline in the second quarter, which is already seen as a possibility by many experts, this would constitute a technical recession.”

BoJ Kuroda: Will re-examine economic and price developments at next meeting

BoJ Governor Haruhiko Kuroda warned that risks to economic outlook are “skewed to the downside, mainly from overseas economies.” He cited US-China trade war, China’s stimulus measures, Brexit, geopolitical risks and emerging markets are major uncertainties. He added that “global economy is slowing down and it shows no clear sign of turning for the better. Downside risks from overseas economies are heightening. US-China trade friction appears to be prolonged.”

Thus, “we are facing a situation where we need to pay more attention to the risk of the momentum toward 2% price target being undermined”. And, “with such situation in mind, we will re-examine economic and price developments at the next policy-setting meeting.” Though for now, “a moderate uptrend in wages and prices remain intact,” he said. “Prices are expected to accelerate gradually toward 2%.”

EUR/USD breached 1.0926 low but quickly recovered. Intraday bias remains neutral first. On the downside, decisive break of 1.0926 will confirm resumption of larger down trend from 1.2555 for 1.0813 fibonacci level next. In case of another rise, upside should be limited by 1.1164 resistance to bring down trend resumption eventually. 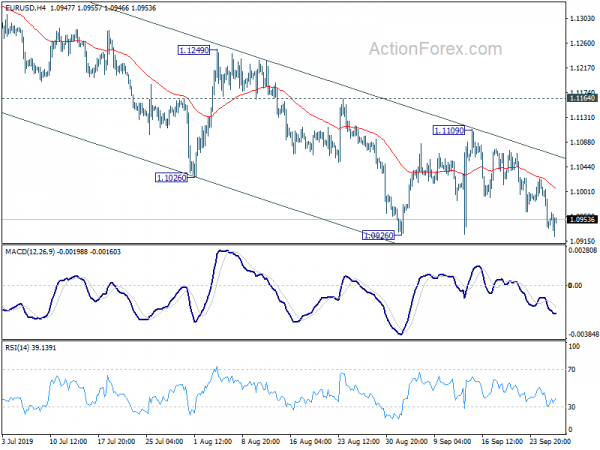 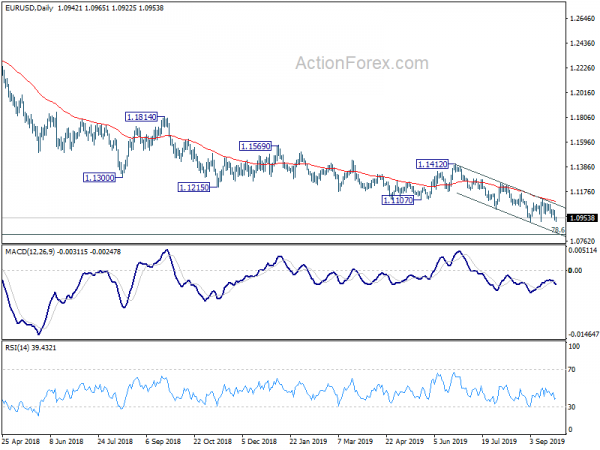