Australian Dollar rises broadly today as dip in unemployment rate should significantly lower the chance of another imminent RBA rate cut next month. Though, upside is so far limited as the central bank is still on easing course. Sterling is digesting recent gains as markets await a Brexit deal finally, subject to support from UK MPs. Over the week, Pound remains the strongest one for now, followed by Euro and Swiss Franc. New Zealand Dollar is the weakest one, followed by Yen.

Technically, Dollar is back under pressure after yesterday’s poor retail sales, but overall outlook remains mixed. EUR/USD’s rebound from 1.0879 is seen as a corrective move and we’d expect strong resistance from 1.1109 to limit upside. USD/CHF edged lower as consolidation from 1.0027 extends, but downside is held well above 0.9843 support. AUD/USD is also held below 0.6810 temporary top, not to mention 0.6894 key resistance. Thus, for now, we’re not expecting one-sided selloff in Dollar yet, at least not until EUR/USD breaks 1.1109 decisively.

US Mnuchin: Administration’s objective to ready the US-China trade deal phase 1 by APEC next month

US Treasury Secretary Steven Mnuchin said yesterday that the texts of phase one US-China trade agreement are being written by both teams. The administration’s “objective” was to ready the agreement to be signed by both Presidents at the APEC summit in Chile on November 16-17.

Mnuchin added the phase one agreement would include a “quite broad” chapter regarding protection of American intellectual property rights in China. The would also be some coverages on structural agricultural issues and currencies. Meanwhile, some of the issues regarding forced technology transfer would be addressed in the second phase of negotiations.

On the US side, Mnuchin said, “we were all focused on was the October tariffs”. And, “we have not gone to the president with any recommendation or any decision” regarding the tranche of tariffs scheduled for December 15.

Chicago Fed President Charles Evans said in a speech yesterday he expected the US economy to grow “a touch above 2 percent this year”. Even though growth is clearly slowing, ‘2 percent is not far from my staff’s estimate of the economy’s long-run potential growth rate, which is between 1-3/4 and 2 percent”. Thus, growth would continue to run roughly in line with potential. Meanwhile, unemployment is anticipated to remain close to current level for some time, “below the long-run benchmark of 4.2 percent”.

He also forecast inflation to “move up slowly and then modestly overshoot out 2 percent target a couple years down the road”. To achieve this, more monetary accommodation is needed that he though necessary just this last December. Since then, some data came in weaker, downside risks multiplied, and inflation and inflation expectations retreated. Thus, the two 25bps rate cut this year were “quite appropriate”.

Yet, Evans added “policy probably is in a good place right now”. Growth outlook is good, and we have policy accommodation in place to support rising inflation.”. He is “keeping an open mind” to arguments of more accommodations, including uncertainties and unexpected downside shocks. But his overall assessment is “pretty much in line” with FOMC’s median outlook. That is, no additional change in federal funds rate target through the end of 2020, and one rate hike in each of 2021 and 2022.

There is increasing optimism that a Brexit deal could finally be agreed by UK and EU, as soon as on Thursday. French President Emmanuel Macron said  “I want to believe that a deal is being finalized and that we can approve it tomorrow [Thursday].” German Chancellor Angela Merkel also said she is increasingly of the belief” that an agreement would be reached. Earlier, European Council President Donald Tusk also noted “theoretically we could accept a deal tomorrow.”

The plan to publish a full legal text ahead of EU summit on Thursday and Friday, however, was put on hold, due to uncertainties on the British side. EU leaders are ready to approve the deal on condition of backing from UK House of Commons, at a special sitting on Saturday. ERG leader Steve Baker said after a backbench 1922 meeting that the deal in the works “could well be tolerable”. But the big question lies in Northern Ireland’s DUP.

In a presentation to the Brookings institution in Washington yesterday, ECB chief economist Philip Lane said: “The euro area is facing a more extended slowdown than previously expected. The convergence of inflation towards the inflation aim has recently slowed and partly reversed. The ECB’s monetary policy measures remain effective in fostering a reacceleration of growth and, thereby, inflation convergence. A highly accommodative stance of monetary policy will be necessary for a prolonged period of time. The more fiscal policy contributes to boosting long-term growth potential and providing cyclical stabilisation, the quicker will be the effects of monetary policy interventions on the economy and inflation.”

According to Alan Oster, NAB Group Chief Economist: “There are tentative signs that the trend decline in business conditions since mid-2108 has slowed, but conditions remain below average with only a small increase in Q3. Business confidence saw a sharp fall in Q3 more than reversing the surprising bounce in Q2. It appears that any post-election optimism has faded despite very low interest rates following the back to back interest rate cuts mid-year”.

UK retail sales will be the main feature in European session and Swiss will release trade balance. later in the day, US will release Philly Fed survey, housing starts and building permits, industrial production and jobless claims. Canada will release manufacturing shipments.

AUD/USD recovers strongly ahead of 0.6710 minor support but stays below 0.6810 resistance. Intraday bias remains neutral first. Price actions from 0.6670 are seen as a corrective above. Above 0.6810 will extend the rebound but upside should be limited by 0.6894 resistance to bring down trend resumption. On the downside, break of 0.6710 minor support will turn bias back to the downside for retesting 0.6670 low. 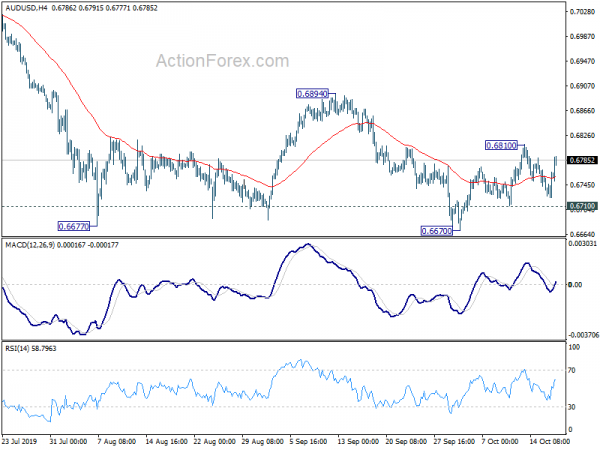 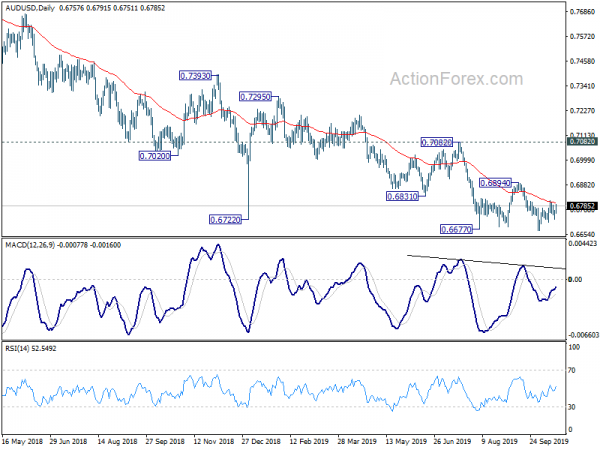